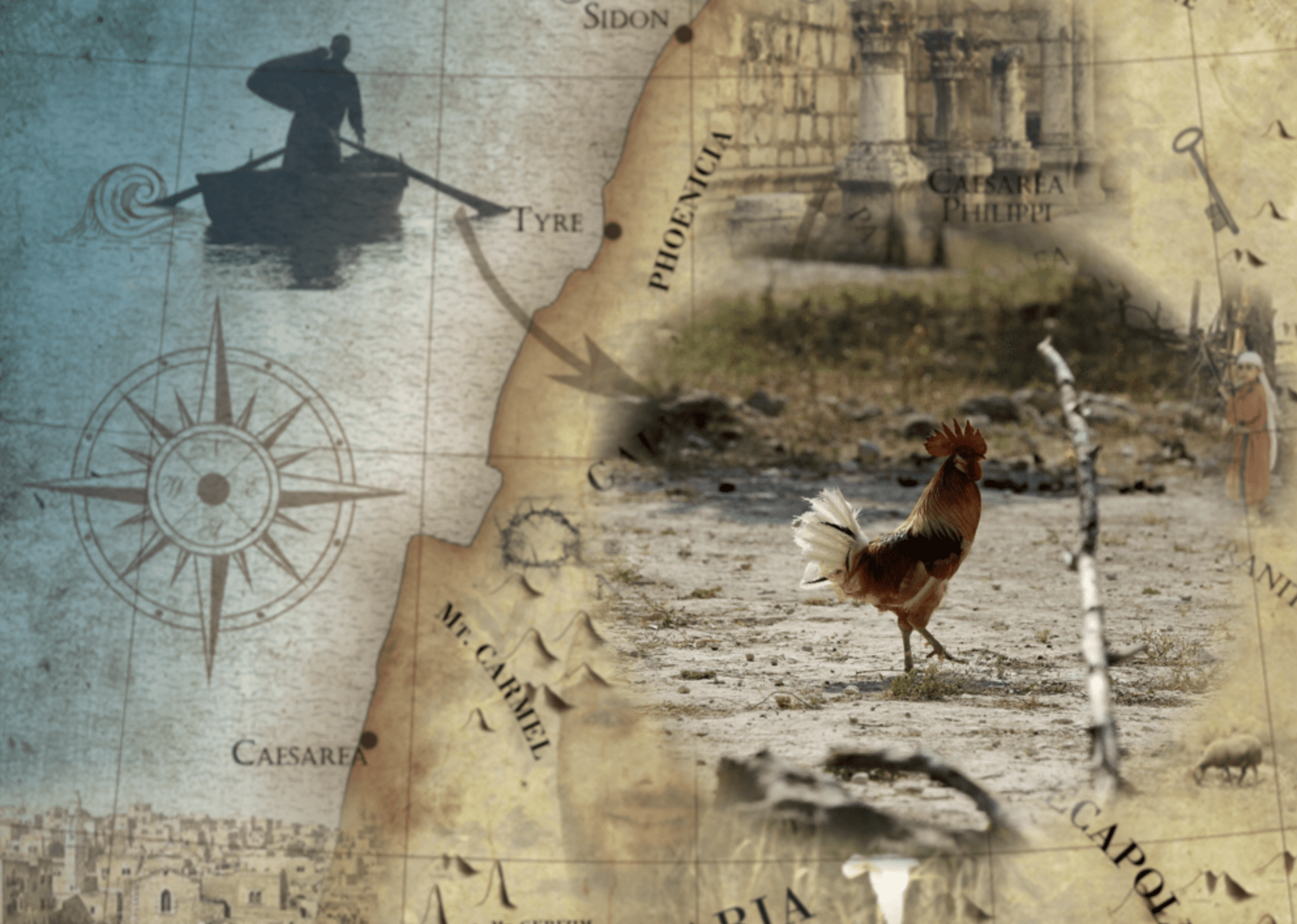 Hidden Things: A New Meaning for the Rooster that Marked Peter’s Denial

**WE ARE FEATURING THIS ARTICLE AGAIN BECAUSE OUR LABOR DAY PUZZLE SALE IS ON NOW. 2 for $20 FOR ANY COMBINATION OF PUZZLES. CLICK HERE TO BUY YOURS NOW.

The following is the first in a series of articles giving greater detail from the stories behind the hidden things in our Treasures from the Life of Jesus jigsaw puzzle. If you haven’t gotten yours yet, BUY IT HERE.

If you already have yours, bookmark or print this page so you can hang on to the story to share with your family as you come upon the hidden image when you do the puzzle.

When we were deciding what hidden things to include from the New Testament in our recently released Treasures from the Life of Jesus jigsaw puzzle, there was one I knew would be included without even giving it a second thought: a rooster.

That sacred night of suffering at Gethsemane and the events that followed are significant for countless reasons, but the scene of Peter’s prophesied denial and the cock that crew, reminding him that he had just done what he swore he would never do, is one of the most vivid scenes from the New Testament for me.

Perhaps it’s because in Peter’s immediate realization of his failure and inadequacy, we see ourselves. I know when I stumbled upon a painting in the Kunsthistoriches Museum in Vienna called “The Repentant Peter” and looked into his reddened eyes, still welling with new tears against the background of a rising sun—signally the end of a night that had gone so differently than he believed it would—I certainly saw myself in the frame.

The church that now stands just outside the walls of Jerusalem near Caiaphas’ Palace commemorating the place of Peter’s denial is called “Gallicantu” from the Latin meaning “cock’s crow”. And surely, to many, the sound of that cock’s crow signals failure, weakness, the agony of our collective failure as mortals to stand tall when it is hardest. But I want that sound and that moment to mean something different to you.

First, let me take you to that night.

After Christ was betrayed with a kiss in the Garden of Gethsemane, He was taken before Caiaphas, the high priest, where the scribes and elders were assembled. The 26th chapter of Matthew tells us that “Peter followed him afar off unto the high priest’s palace, and went in, and sat with the servants, to see the end.”

Peter followed when he could’ve fled, showing that much courage at least. But perhaps his courage began to falter as he saw those gathered spit in his master’s face and buffet him (or in other words toss him around from person to person as if by waves of the sea[i]). Others smote him with the palms of their hands—all this after false witnesses had already deemed him worthy of death in this sham trial that departed from every normal legal procedure of the day.

It was about this time that a maiden at the entrance to the palace saw Peter and declared, “thou wast with Jesus of Galilee”. Perhaps in her words he also heard the implication that he ought to be inside receiving similar humiliation and abuse. He denied before them all saying, “I know not what thou sayest” (Matt. 26:69-70). Sometime later, after he had retreated out onto the porch, another maid pointed him out to all those that were gathered and announced, “This fellow was also with Jesus of Nazareth” (v. 71).

Perhaps contemplating surviving in this world without his master, this time Peter denied with an oath that he did not know the man, doubling down on the insistence of his first denial.

James E. Talmage tells of the third denial this way in Jesus the Christ:

The April night was chilly, and an open fire had been made in the hall or court of the palace. Peter sat with others at the fire, thinking, perhaps, that brazen openness was better than skulking caution as a possible safeguard against detection. About an hour after his former denials, some of the men around the fire charged him with being a disciple of Jesus, and referred to his Galilean dialect as evidence that he was at least a fellow countryman with the high priest’s Prisoner; but, most threatening of all, a kinsman of Malthus, whose ear Peter had slashed with the sword, asked peremptorily: “Did not I see thee in the garden with him?”

Then Peter went so far in the course of falsehood upon which he had entered as to curse and swear, and to vehemently declare for the third time, “I know not the man.” As the last profane falsehood left his lips, the clear notes of a crowing cock broke upon his ears, and the remembrance of his Lord’s prediction welled up in his mind.[ii]

Peter’s own words must have rung with stinging hypocrisy in his mind as he realized what he had done. I’m sure he truly believed his own declaration that he would stay true when everyone else faltered just as he leapt without reservation over the side of the boat to impossibly walk across the water to his Lord. But in both instances, he faltered when presented with his fear of the waves.

With these thoughts no doubt in his mind, feeling the chasm between all he hoped to be and what he was in that moment, he went out and wept bitterly.

But that is not the last we see of Peter. As such, when we hear his name, I don’t think failure or denial is our first thought. No, we know Peter for his boldness, for his mighty testimony, and for his unfailing devotion to the mission given to him by Jesus.

But he might not have been able to be any of those things had it not been for that night when he faced his weakness and inadequacy head on and decided to surrender it to the Lord.

It was of this dark night of Peter’s disappointment that President Gordon B. Hinckley said something that has since become oft-quoted: “One of the great tragedies we witness almost daily is the tragedy of men of high aim and low achievement. Their motives are noble. Their proclaimed ambition is praiseworthy. Their capacity is great. But their discipline is weak. They succumb to indolence. Appetite robs them of will.”[iii]

The secret is, we all represent that tragedy. Even if you don’t consider yourself an ambitious person, you likely come out of each conference weekend recommitted to improving your spiritual habits, being a person renewed, and serving others with total confidence and promptness. And yet, we each fall so far short. (Why do you think we need another conference six months later?)

Help your kids learn more about Jesus with this activity for the whole family.

Perhaps Peter didn’t understand how far short he could fall until that night when the Son of living God needed his loyalty most and he failed to give it. But in finding where he fell, he could finally be humbled enough to truly stand in the testimony of Jesus. Perhaps before that he believed too much in his own strength, perhaps all the miracles he’d witnessed made him believe he too was something more than just a man.

But the cock crew and he remembered that he wasn’t.

But Christ would give him a chance to repent of his denials. After His resurrection, Jesus came to his apostles again on the shores of the Galilee. When John told Peter it was the Lord that addressed them from the shore, Peter jumped into the water to get to Him. They pulled in their plentiful catch and dined together on the shore.

As they ate, Jesus said to Peter, “Simon, son of Jonas, lovest thou me more than these?” Peter answered, “Yea, Lord thou knowest that I love thee.” And Jesus answered, “Feed my lambs” (John 21). Nearly this exact exchange happened another two times between them.

When we look at this moment, we often talk about it being an admonition to Peter to go forth and preach the gospel, that Peter “was no longer to be a fisherman, but rather a shepherd, caring for the Master’s flock.”[iv]

But I always remember an insight from my parents that draws my mind not to the admonition to “feed my lambs”, but to the three opportunities Jesus gave Peter to reaffirm that he loved Him. Three denials, then three affirmations of devotion; the Lord was giving Peter an opportunity to be redeemed from his mistake in a direct, beautifully parallel way.

Peter himself called the trial of our faith, “much more precious than of gold that perisheth” (1 Peter 1:7) and surely that’s what that darkest night of his was to him, though he surely didn’t think the moment precious yet when he heard the cock crew.

But it was a turning point. It could’ve been a turning point towards a life lived in bitter regret and preoccupation with past mistakes, but instead it was a point at which he understood that the spirit is willing, but the flesh is weak and the only one that can make up the difference is the Lord.

The boldness he testified with from that time forward was not the boldness that gloried in his own strength or his ability to do what others could not, but gloried in the strength his God. As Richard Lloyd Anderson put it, “after the crucifixion, [Peter] testified courageously for a third of a century, emulating Jesus in his manner of living and dying…Peter’s greatest message is a life of commitment and courage.”[v]

Imagine the weeping Peter on that night of denials, bitterly disappointed in his own cowardice, learning that one day his great legacy would be courage.

That is what I want the rooster to mean to you when you find it in the Treasures from the Life of Jesus puzzle. Not a symbol of disappointment, but a reminder that the moments in our lives when the cock crows and we have failed are not the final word. Instead, that sound of the rooster’s crow means that if we humble ourselves and put ourselves in the Lord’s hands, we may yet have a legacy of courage when we are feeling most cowardly; a legacy of glorious, spiritual success when we feel like an utter failure.

[ii] “Chapter 34: The Trial and Condemnation.” Jesus the Christ, by James E Talmage, The Church of Jesus Christ of Latter-Day Saints.

Pres. Kimball, in his BYU address, "Peter, My Brother" nowhere suggested that the Savior commanded Peter to deny him. Rather, he suggested that Peter, in his mind, may have been worried about what would happen to the church if something happened to him. The idea that Peter was commanded or inspired to deny Christ doesn't square with the intense remorse he felt over the incident.

I can't get into Peter's head but I, too, believe Peter was no coward. I feel it is entirely possible that he was commanded to deny the Christ that he would be preserved to lead the Savior's flock following our Lord's atoning sacrifice.