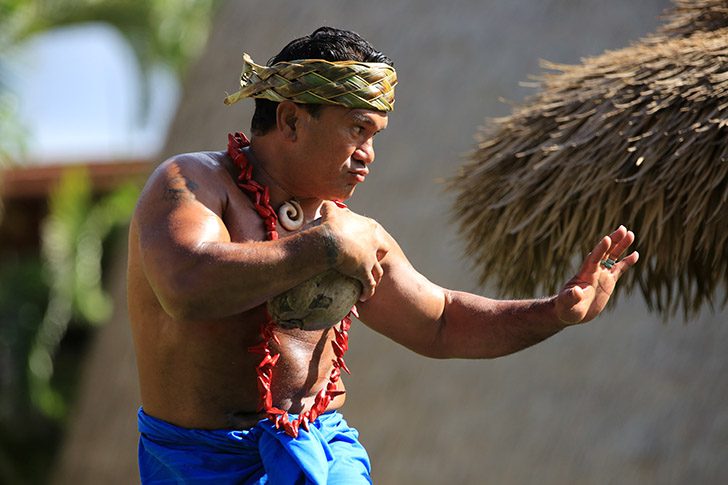 Enter to win a four-day, three-night excursion for four, including airfare, accommodations and food to Laie, Hawaii and the Polynesian Cultural Center. Winners will be announced on November 22. Don’t delay! You have a very good chance of winning! Click here for Meridian’s special link to the contest.

It used to be that when people came to Oahu, they stayed in Honolulu, and then came only for a day trip to the windward side of the island in Laie to see the LDS-owned Polynesian Cultural Center. As Hawaii’s number one, favorite attraction, nobody wanted to miss it—but everybody came and then went back to Honolulu and the south shore for the rest of their visit. Though the PCC was a charming must-see, it was also a drop-in while they centered their trip somewhere else.

Now all that has changed. Instead of staying in the more crowded city of Honolulu, you can plan an entire trip to Laie and enjoy a pristine Hawaii as you imagine it might have been. With a new Courtyard Marriott Hotel right on the grounds of the PCC, you can center your whole trip in Laie and take in a session at the stunning Laie Temple, tour BYU-Hawaii and enjoy adventures and pristine, uncrowded beaches that are available on this more quiet side of the island.

The LDS Church-owned Hawaii Reserve, Inc., working with several partners, has turned Laie into a destination vacation. Here’s a sample of what you’ll find on this north shore. We came to sample it—and we were impressed.

When we lived in Virginia, a neighbor called so excited after she had returned from visiting the Polynesian Cultural Center. She raved, “I have never been treated so well in my life. The people were so kind.”

Indeed, they are. The Polynesian Cultural Center is 42 acres of tropical splendor and authentic Polynesia. If you want to know what life was once like in Polynesia, visit the six villages where the beautiful faces of BYU-Hawaii students take you on a journey into their own lands. These villages include Samoa, Tonga, Tahiti, Fuji, Hawaii, and Aotearoa (New Zealand) where you experience the people’s culture through games, activities, shows and hands-on activities of every sort.

You might get a glimpse of Samoan cooking, or watch someone shimmy up a palm tree in seconds. You might learn Tahitian spear throwing, fire making or how to canoe down a river—and make your own journey down the waterway that laces through the park. This is a place to experience the aloha brand of friendship.

Here’s a video of Scot learning the Haka from a new (and not altogether slim) friend.

Every afternoon at 2:30 in “Rainbows of Paradise”, costumed dancers display their energetic technique in Hawaii’s only water-borne show.

When you aren’t in the villages, wander through the Hukilau Marketplace and find ukuleles, leis, tiki carvings, and island gifts.

For dinner go to the Ali’i Luau where you will have pork slow-roasted in an underground oven and other delights in the buffet, along with an island show.

At night the stage ignites with the Ha-Breath of Life show, which is the story of Mana and his beloved Lani, that features over 100 Polynesian natives, special effects, animation and surround sound. It is a Pacific isle saga of birth and death, love and family, triumph and tragedy—all punctuated with the fire dance. This may be the only fire-dancing act that begins backstage with a spiritual thought and a heart-felt prayer.

In the evening you can join a tropical, stand up paddle board tour on boards that glow in the dark. The Lunar Legends Lagoon Tour is guided by a native who shares ancient Polynesian legends and lore as you drift down the lazy river in the midst of the Polynesian Cultural Center. The experience lasts about 90 minutes as the glow from your board matches the stars in the sky.

The Laie Temple is the jewel of the Pacific, and was the first temple built out of Utah, on land purchased by the Church in 1865, a reminder that the Church has had a long presence in this area. President Joseph F. Smith was in Hawaii on business in the spring of 1915 when he was moved by a spiritual impulse to dedicate a site for the Laie Hawaii Temple. The action was later ratified by the brethren and publicly sustained in the October 1915 General Conference. Surprisingly, the Laie Hawaii Temple was dedicated in 1919, sixteen years before the creation of the first Hawaiian stake on Oahu in 1935!

The Visitor’s Center on the temple grounds is the second most visited temple visitors’ center in the church.

Surely the most original idea for helping students pay for school is at BYU-Hawaii, where many from Polynesia who would otherwise not be able to attend school are admitted with a work grant.

If you can fire dance you can go to college. (Or if you are willing to learn.)

Anyone who visits Laie knows that the food is not to be missed. The best shrimp we ever had was from a food truck that sold garlic shrimp. 7 Brothers sells unforgettable burgers.

Angels Ice Cream offers the largest Hawaiian ice layered with whipped cream, ice cream and condensed milk with you can imagine. Everything they serve at Kahuku Farms is fresh and grown right on the farm there. The enormity of the servings at Papa Ole’s is only matched by the quality.

You can come to the North Shore just to eat.

So, you climb into a harness, strap it to a zipline and go sailing through space.

Yes, that is Maurine and Scot Proctor zipping through space trying to go upside down at 40 mph.

At Keana Farms, sometimes you are over forest and some times over farm land, but always it is exhilarating to see the blue ocean beyond.

You can hike the trails in the area—like the one in the green mountains that lead to Laie Falls. Or if you want, take a beach Segway tour—or perhaps learn to surf. Not far away you can glide on a jungle kayak on a river that flows into the ocean or see where scenes from Jurassic Park were filmed.

When you plan a trip to Laie, you accomplish many things at once. You come to a paradise where the beaches are untouched. You see the place where the Church was established and feel the unique spirit of the place. You don’t have to leave drive around the island to find recreation. It’s all right there.

Reminder: don’t forget to sign up for this free vacation for four.

Enter to win a four-day, three-night excursion for four, including airfare, accommodations and food to Laie, Hawaii and the Polynesian Cultural Center. Winners will be announced on November 22. You have a good chance of winning. Click here for Meridian’s special link to the contest.

Laie remains a lovely place to live and work, thanks to wonderful families . . . like the Thompsons and the Packs.

I loved the Packs and they were our neighbors for many years on Laie Point!! Your grandmother Alice would be crocheting, watching tv and studying a lesson all at the same time. My dad was also called as a labor missionary in 1961 his name was Heber Thompson. Laie is a beautiful place with so many special places to see and things to do.