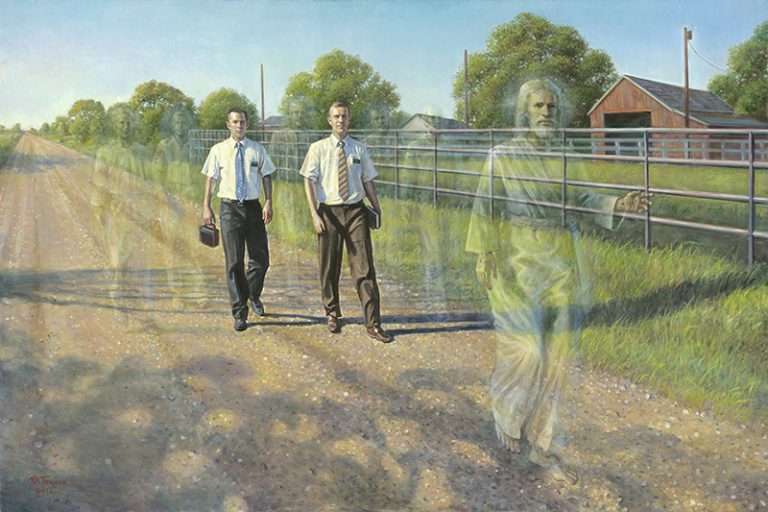 Hand in Hand with Angels

Cover image: “I will go before your face,” by Kenneth Turner.

I recently wrote an article about how we are co-workers with angels in the gathering of Israel.  I want to add to that topic.

As we are in the quick winding up scenes of the pre-millennial era, both missionaries and angels are hastening to spread the gospel.  Angels are often directed to help missionaries in and out of the field in a variety of ways.  They protect, soften hearts, and support any of us who set out to gather Israel.

Missionaries often find themselves in areas or situations that are dangerous, and many times aren’t even aware of the peril they are in until prompted by an angel.

David Arroyo told me about a harrowing experience he had on his mission, which could have cost him his life.  He said:

“I was serving in what was called the “Spanish American Mission,” which included Texas, and New Mexico.  One day, my companion and I were walking down on the right side of a highway just before sundown.     Suddenly I heard a loud voice exclaim, ‘Look behind!’  I quickly turned to look back and saw a huge combine machine, which extended far off the side of the road, barreling down the road toward us. The operator was driving on the extreme right lane and there was little room for anything but that machine.  It was just feet away from hitting us.

“Because of the warning, I grabbed my companion and pulled him down into a ravine, and we barely missed being hit.  The Thrasher machine    operator had not even seen us and continued on his way, but I knew that angels had warned and helped us that day.” [1]

Elder Phillip Harmon also had a remarkable occurrence of angelic protection and support on his mission. He actually felt angels lighting the path before him on a very dark night. He and his companion got out of a lesson about 8:45 p.m. and found that their ride home had fallen through.  They began walking along a train track that went through a thick forest. He wrote:

“It was really dark that night, no moon, and lots of clouds, and a long way away from any streetlight, so it was difficult to see.  We didn’t have any flashlights, so it only made the darkness a bigger problem. We said a prayer before we started so that we could make it home all right.

“After a few minutes, it seemed as if the path just ‘lit up.’  I thought it was my eyes adjusting to the darkness at first, but looking back behind us, it was still as black as had been before, however while looking ahead, we     were able to see where we were going.  Nothing extremely bright, but        enough to avoid trouble and see straight.

“It was a little over an hour-long walk, but we made it home safe.  It is hard to explain.  I kept trying to tell myself that I imagined it but looking behind and seeing the contrast between the two exposures of light. We knew we were definitely being helped out.” [2]

Susan Richardson was keenly aware of angelic ministrations while she was serving with her husband Brian, then Mission President of the Ecuador Quito North Mission from 2013-2016. She told me:

“I became convinced that missionaries are only the mortal part of the labor force and that they are working hand-in-hand with angels.”

Susan was inspired to ask the missionaries if they had experienced any angelic help while serving the Lord. Many of their missionaries shared amazing experiences with her and allowed her to articulate them on her missionary blog. I want to share a few of these with permission.

“One evening Elders Smith and Chávez were walking up a street when they saw an ominous group of people at the top of a hill who the elders had no desire to pass.  As they were contemplating their dilemma, a taxi pulled up next to them and the driver asked through his window if they needed a ride.  They were surprised he had showed up at that moment, but what made this story even more unusual is that when they told him they had no money he offered to drive them without pay.  After passing the danger, the elders offered to get out and walk the rest of the way home.  The taxi driver refused, however, surprising them even more by pointing in the direction of their apartment, and saying:

‘But you live over there.’

“They had never met this driver and when he dropped them off at their apartment, he flatly refused the money they wanted to go get from their apartment to pay him.” [3]

It could seem like a great coincidence to some, but these Elders never doubted that they were ministered to by an angel.

The following are two experiences of sister missionaries who felt physical help from unseen beings.

“Sister Espinoza was about to cross a busy highway in Otavalo when she felt a tug on the back of her sweater.  She turned to see who touched her, when an unforeseen car sped by.  If she had walked into the street as she had intended, she would most likely have been hit.” [4]

“Sister Black likewise was blessed with protection. On a preparation day, she and her district went to a place that had a large vine swing. She was swinging on the vine when either the vine broke or she otherwise fell and would have been seriously injured, except that she felt someone catch her, and she suffered no injuries. [5]

I just marvel at a sacred scene that Joseph Smith saw in vision, which illustrates the angelic protection that missionaries frequently enjoy.  He said,

[I saw] “Elder Brigham Young standing in a strange land, in the far south and west, in a desert place, upon a rock in the midst of about a dozen men who appeared hostile.  He was preaching to them in their own tongue, and the angel of God standing above his head, with a drawn sword in his hand, protecting him, but he did not see it. [6]

Another primary reason for angels to intervene in missionary work is to soften and prepare hearts for learning the gospel.

Missionary Sees an Angel During Discussion

I love this tender story about a departed family member of the investigators who helped the missionaries prepare his family for the gospel.  Sister Richardson writes:

“Elder Suarez himself actually saw an angel during one of their lessons     while working in the Centenario Ward in Otavalo.  While they were        teaching a family, Elder Suarez lowered his head to take a drink from a glass, when he saw a little child sitting on the dining room table looking intently at his companion while he was teaching.  The child was smiling and was very sweet with a happy face and he remained there during his companion’s teaching.

“It was at a later appointment that the family shared with them that they had a small son who had died earlier, who according to his mother, comforted her from time to time and encouraged her to keep learning more about the Gospel and to endure to the end.” [7]

By seeing this angel child, and sharing his experience with the parents, Elder Suarez validated the mother’s own experience, and hearts were opened.

According to Alma, preparing hearts is one of the purposes of angelic ministry. He wrote:

“…angels are declaring …unto many at this time … for the purpose of preparing the hearts of the children of men to receive his word.” [8]

Hearts DO need preparation in order to open up as in the following powerful experience.

Sister Gil and Bosse were in the tin hut home of an investigator at 7:00 pm when the earth suddenly shook violently in a 7.8 earthquake, two hours from the coast of Esmeraldas, Ecuador.  Sister Richardson records what happens right after the earthquake took place:

“People were screaming, children were whining, dogs were barking, and the missionaries were just as frightened.  While her companion was clinging to her, Sister Gil said that a recent training on praise came to her mind.  In that distressing and dark moment, she began to bear vocal testimony to the goodness and greatness of the Lord. She shared with me that at the very moment that she opened her mouth in praise, she felt     what she described as “el manto del Señor (cloak of the Lord) placed          over her shoulders, and she and her companion felt unspeakable peace.

“As they stood in the open area, Sister Bosse began to sing, ‘Master the Tempest is Raging’ and before long, a group of about 15 alarmed      individuals…knelt around them in prayer… as the Sisters stood singing to the Heavens on that dark and terrifying night.

“After about five minutes, the strangers who… felt like…friends and neighbors, stood, hugged each other, and returned to where they had come from, having had a notable transformation of peace and serenity, while the sisters stood quietly reflecting on the miracle they had just witnessed.

“Sister Gil told me later that she understood that night in a very real way the power of vocally praising the Lord and how it opened the door to the ministration of angels, as well as …[opening] the door to the Heavens, especially in the midst of trouble. [9]

These stories of angelic intercessions illustrate the fact that missionaries, (and anyone seeking to be involved in that work) are so often protected, lifted and inspired by angels. When we are doing the Lord’s work, we are literally putting ourselves in His hands, and angels become our companions. They work through us to touch and gather Israel.

For more true accounts of heavenly help for missionaries read the book Mine Angels Round About by David F Babbel, former president in Brazil

While serving a mission in Johannesberg, S Africa, with my wife in 2003 our President related an experience of two young sisters. They decided the next morning they would like to climb a hill near where they lived for morning worship and view the sunrise. They did as planned, and on the way home two men that were hiding jumped out, threw each of them to the ground and were on top of them when suddenly the men looked up and, with expressions of fright, jumped up and ran off, leaving the two sisters unharmed. They could only imagine that perhaps some Nephite warriors appeared to those men and frightened them off, or maybe and African Lion. But neither of the sisters saw anything or anyone. Needless to say, our President warned all the sisters to please not put themselves in places of danger.