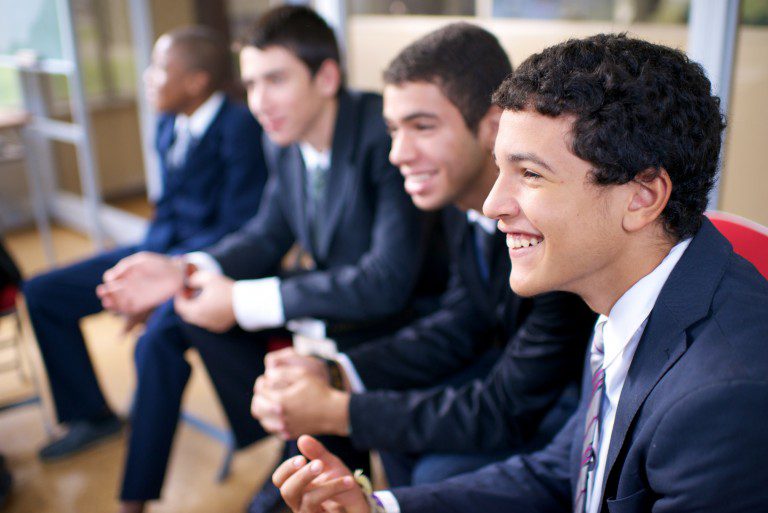 Many young men receive the Aaronic Priesthood with limited understanding about what they are receiving. Often that understanding consists only of their role in administering the Sacrament. But the Aaronic priesthood is much more than that. It is a power and authority that blesses every man, woman, and child in the Church—not just those who hold it. As a result, it is important that every young man (and every young woman!) understands the doctrine of the Aaronic priesthood.

The following are five truths about the Aaronic priesthood that every Latter-day Saint should know.

The Aaronic Priesthood was restored by John the Baptist, the same man who baptized Jesus Christ

Both Joseph Smith and Oliver Cowdery have left us accounts of the restoration of the Aaronic priesthood. Oliver Cowdery explained that it was “after writing the account given of the Savior’s ministry,” beginning in 3 Nephi 11, that he and Joseph understood that they needed baptism to be saved but lacked the priesthood authority to perform it (Joseph Smith-History Appendix). As with many other times in his life, Joseph Smith’s solution was to go to the woods and pray about it. He described what happened next in these words:

“While we were thus employed, praying and calling upon the Lord, a messenger from heaven descended in a cloud of light, and having laid his hands upon us, he ordained us, saying:

Upon you my fellow servants, in the name of Messiah, I confer the Priesthood of Aaron, which holds the keys of the ministering of angels, and of the gospel of repentance, and of baptism by immersion for the remission of sins; and this shall never be taken again from the earth until the sons of Levi do offer again an offering unto the Lord in righteousness.

… The messenger who visited us on this occasion and conferred this Priesthood upon us, said that his name was John, the same that is called John the Baptist in the New Testament, and that he acted under the direction of Peter, James and John, who held the keys of the Priesthood of Melchizedek, which Priesthood, he said, would in due time be conferred on us” (JS-H 1:68-69, 72)

It would be hard to overstate the importance of this event. One of the primary reasons we can claim to be the only true Church of Jesus Christ (D&C 1:30) is because we have the priesthood authority of God. We received that power and authority from the hands of angels, beginning with John the Baptist. It is empowering to know that the priesthood of that deacon who passes the sacrament, or that priest who baptizes, is the same priesthood that was once held by John the Baptist!

The Aaronic Priesthood is the right to represent Jesus Christ

Many young men understand the Aaronic priesthood to be the right to pass the Sacrament, but it is so much more! As President Harold B. Lee once explained, priesthood is the right to represent Jesus Christ. He shared the following experience to teach this in General Conference:

“The other night I had a group of young Cub Scouts, who are about the age to become ordained deacons, and I said to these young men, ‘When you get to be deacons, what will be the duties of a deacon?’

And they all said, ‘The duty of the deacon is to pass the sacrament.’

And I said, ‘Now I would like you to think of this a little differently. That isn’t the way to explain the duty of a deacon. What does it mean to pass the sacrament? When a deacon carries the emblems of the bread and water . . . [he] has the responsibility of representing the Lord to carry these emblems and thus be the Lord’s agent in submitting these to the body of the Church.

When you ask a teacher what are his duties, he may answer, ‘Well, it’s to do home teaching.’ But suppose you say to him, ‘When you do home teaching you are representing the Lord, to visit the home of each member … They should have in mind when they are acting in those capacities it is as though they were acting for and responsible to the Lord. …

If they [understood this], they would always want to appear … at their best when they are exercising their priesthood. Their hair would be properly groomed; their clothing and appearance would reflect the sanctity they should feel in the performance of their priesthood duties. I have had that same feeling. I have never performed an ordinance, such as administering to the sick, without first excusing myself, if I were out in the garden or somewhere, until I was properly clothed, to make the best appearance I could, because I felt in so doing I was drawing close to the Lord himself, and I want to appear at my best in his presence.” (President Harold B. Lee April 1973, emphasis added.)

As President Lee explained, when a young man administers the sacrament he is representing the Lord. If Jesus Christ attended our Sunday meetings, the first thing he would do is administer the sacrament. Since he could not be there personally, he called and authorized young men in the Church to do it for him. When a young man understands that, he will act and dress differently during the Sacrament. In fact, he will act differently throughout the week and throughout his life. Similarly, when Church members remember that the uncomfortable Deacon passing them the Sacrament is a representative of Jesus Christ, they will treat the experience (and the boy) differently also.

Women also have priesthood authority in their Church callings.

For example, when a young woman is set apart by the Bishop to serve as a class president, she is given priesthood authority to serve in that calling. With this delegated authority from the Bishop, she has a right to receive revelation to guide her and the young women she serves. Her responsibilities and privileges are similar to those of a Deacons quorum president or Teachers quorum president. Because women have authority to represent Christ in their callings too, the priesthood should not be perceived as merely a “boy topic,” but as a doctrine that should be understood and applied to all in the Church.

The Aaronic Priesthood blesses all Church members through its ordinances

President Dallin H. Oaks explained this concept when he taught, “How does the Aaronic Priesthood hold the key to the ministering of angels? The answer is the same as for the Spirit of the Lord. In general, the blessings of spiritual companionship and communication are only available to those who are clean. As explained earlier, through the Aaronic Priesthood ordinances of baptism and the sacrament, we are cleansed of our sins and promised that if we keep our covenants we will always have His Spirit to be with us. I believe that promise not only refers to the Holy Ghost but also to the ministering of angels, for “angels speak by the power of the Holy Ghost; wherefore, they speak the words of Christ” (2 Ne. 32:3). So it is that those who hold the Aaronic Priesthood open the door for all Church members who worthily partake of the sacrament to enjoy the companionship of the Spirit of the Lord and the ministering of angels” (President Dallin Oaks, Ensign Nov. 1998).

Although they are sometimes used interchangeably, there is a difference between power and authority in the priesthood. That difference is best seen in how each is received. As President Russell M. Nelson explained, “when ordained to an office in the priesthood, you are granted authority. But power comes from exercising that authority in righteousness” (Nelson, Ensign Nov. 2003).

Authority is the right to represent Jesus Christ and is received by the laying on of hands, but the spiritual power to exercise that authority depends on personal righteousness. As the Lord explained, “The rights [or authority] of the priesthood are inseparably connected with the powers of heaven,” which can only be controlled or handled “upon the principles of righteousness” (D&C 121:36). As a result, all deacons in the church hold the same amount of authority, but no two deacons hold the same amount of priesthood power.

Therefore, priesthood holders must strive to always be worthy to wield priesthood power. As Elder Jeffrey R. Holland has explained, “Young men, you will learn, if you have not already, that in frightening, even perilous moments, your faith and your priesthood will demand the very best of you and the best you can call down from heaven. You Aaronic Priesthood boys will not use your priesthood in exactly the same way an ordained elder uses the Melchizedek, but all priesthood bearers must be instruments in the hand of God, and to be so, you must, as Joshua said, ‘sanctify yourselves.’ You must be ready and worthy to act. That is why the Lord repeatedly says in the scriptures, ‘Be ye clean, that bear the vessels of the Lord’” (Holland, Ensign Nov. 2000).

The Aaronic priesthood is so much more than simply the power to administer the Sacrament. It is the restored priesthood of John the Baptist and a portion of the priesthood authority of God. It gives a young man the right to represent the Lord Jesus Christ and unlocks for all of us the blessings of heaven. But it can only be used in righteousness. Therefore, the counsel of the Lord to his ancient Aaronic priesthood holders is equally applicable today: “Be ye clean that bear the vessels of the Lord!” (Isaiah 52:11, DC 38:42).

Beautifully said. At the risk of self-promotion, the third point reminds me of a talk I gave on Mother’s Day, a few years ago. I posted an adaptation at https://tinyurl.com/ybenlbul . As for the rest of the article, this is awesome. I remember as a newly baptized priest, my quorum advisor once told us that each of us had more divine authority in our little finger than President Bush had in his entire body. That lesson has always stuck with me.