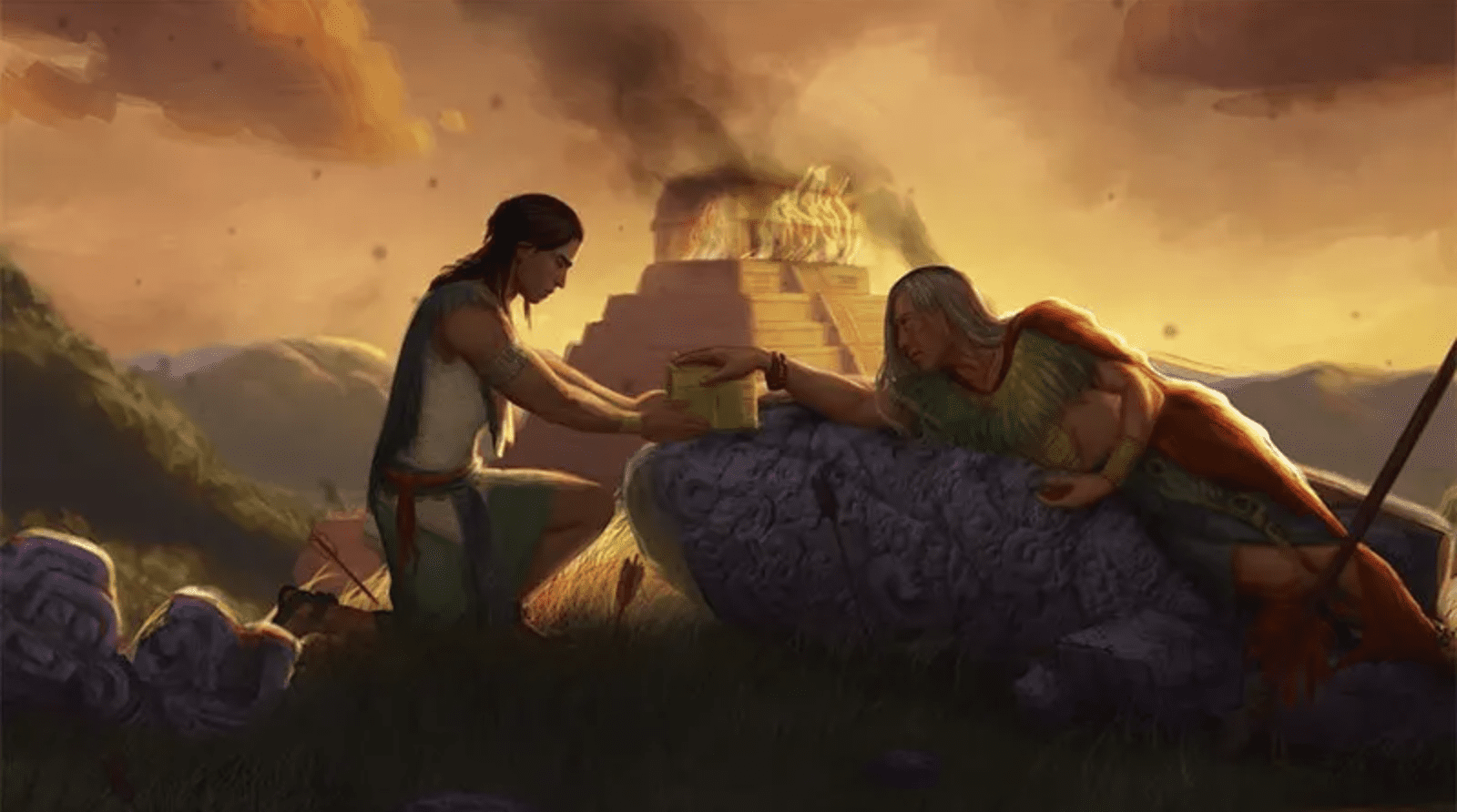 We cherish the Book of Mormon for its profound witness of Jesus Christ, but one thing we talk about much less, yet is a vital message, is what it teaches about how a nation prospers or falls. It is not silent about what leads a people to strength, prosperity and safety and what shreds the fabric of their world.

In a time of complexity and challenge, we turn to this timeless scripture, compiled and written by those who have seen our day, and knew just what to include to spare us from collapse.

Here are five principles we cannot ignore if we are to be a free and protected people—and notice they are not about politics or candidates, but about the moral grounding of a nation, which we ignore at our peril.

First, America is a promised land.

A promised land is a covenant land which means blessings and promises are upon it that come directly from God. This means “it shall be a land of liberty unto them” “never brought down into captivity” where people shall “prosper upon the face of this land” on this condition—that Jesus Christ is the God of this nation. If the day comes “that they will reject the Holy One of Israel, the true bMessiah, their Redeemer and their God, behold, the judgments of him that is cjust shall rest upon them” (See 2 Nephi 1: 7-11).

This promise is repeated in one way or another at least 38 times in the Book of Mormon, lest we miss the message, and we see two nations fall that failed to heed the promise. The story of one nation disintegrating might have been enough, but the Lord gives it to us twice, as if to say “Get it?”

Why does a nation fall that rejects the Lord? In part, it is because the idea of an objective truth like the commandments is abandoned. A people who are not moral do not govern themselves in the same honorable way. Instead of regarding each other as made in the image of God, relationships are reduced to plays for power. Family and its attendant virtues are disregarded. Each person walks in his own way. Relativism reigns. Secularism becomes cruel.

In 1978 and already foreseeing these times, Elder Neal A. Maxwell said, “We are now entering a period of incredible ironies. Let us cite but one of these ironies which is yet in its subtle stages: we shall see in our time a maximum if indirect effort made to establish irreligion as the state religion. It is actually a new form of paganism that uses the carefully preserved and cultivated freedoms of Western civilization to shrink freedom even as it rejects the value essence of our rich Judeo-Christian heritage…

“Irreligion as the state religion would be the worst of all combinations. Its orthodoxy would be insistent and its inquisitors inevitable. Its paid ministry would be numerous beyond belief. Its Caesars would be insufferably condescending. Its majorities—when faced with clear alternatives—would make the Barabbas choice, as did a mob centuries ago when Pilate confronted them with the need to decide.

“Your discipleship may see the time come when religious convictions are heavily discounted…This new irreligious imperialism seeks to disallow certain of people’s opinions simply because those opinions grow out of religious convictions. Resistance to abortion will soon be seen as primitive. Concern over the institution of the family will be viewed as untrendy and unenlightened.

“In its mildest form, irreligion will merely be condescending toward those who hold to traditional Judeo-Christian values. In its more harsh forms, as is always the case with those whose dogmatism is blinding, the secular church will do what it can to reduce the influence of those who still worry over standards such as those in the Ten Commandments. It is always such an easy step from dogmatism to unfair play—especially so when the dogmatists believe themselves to be dealing with primitive people who do not know what is best for them. It is the secular bureaucrat’s burden, you see.

“If we let come into being a secular church shorn of traditional and divine values, where shall we go for inspiration in the crises of tomorrow? Can we appeal to the rightness of a specific regulation to sustain us in our hours of need? Will we be able to seek shelter under a First Amendment which by then may have been twisted to favor irreligion? Will we be able to rely for counterforce on value education in school systems that are increasingly secularized? And if our governments and schools were to fail us, would we be able to fall back upon the institution of the family, when so many secular movements seek to shred it? (Neal A. Maxwell, “Meeting the Challenges of Today” https://speeches.byu.edu/talks/neal-a-maxwell/meeting-challenges-today/)

Second, as long as a people are moral, they can generally be trusted to choose their leaders well.

This is why society works, for a righteous people. The majority of them will usually not choose evil if they are allowed to see clearly. However, if they are propagandized by liars or fed false stories, people can, of course, be carefully led to believe something that is not true about what is good for them.

Several examples of flamboyant, gifted speakers who sought to lead the people from their moorings are introduced in the Book of Mormon. They are silver-tongued and destructive like Sherem, Nehor, and Korihor who preach something that sounds charitable and good, while it has a dark and corrosive underbelly. Evil seeks to hide itself by saying I am the good and charitable way.

When people are righteous, on the whole, the judgment of the majority can be trusted.

Mosiah also understands, however, “If the time comes that the voice of the people doth choose iniquity, then is the time that the judgments of God will come upon you” (Mosiah 29: 27).

That time, in fact, comes as we read in Helaman 5.2.”For as their laws and their governments were established by the voice of the people, and they who chose evil were more numerous than they who chose good, therefore they were ripening for destruction, for the laws had become corrupted.”

Third, a leader can have a powerful influence for either good or ill.

After King Benjamin had led his people to stunning victories against the Lamanites, he did not call his people together to proclaim how great they were, to hail them as supermen or women, but to rally them to see their true relationship as dependents on a mighty God. He did not show false pride, “I have not commanded you to come up hither that ye should fear ame, or that ye should think that I of myself am more than a mortal man” (Mosiah 2:10).

Instead, he turned their devotion to God, “O how you ought to thank your heavenly King! I say unto you…that if you should render all the thanks and praise which your whole soul has power to possess, to that God who has created you… I say, if ye should serve him with all your ewhole souls yet ye would be funprofitable servants” (Mosiah 2:21).

He urged them that their hearts may be changed “through faith on his name” and “under this head ye are made free, and there is no other head whereby ye can be made free” (Mosiah 5: 7,8).

After King Benjamin’s moving teachings, there was not one soul, except children, who did not enter into a covenant with God—and thus were they free and united.

In the starkest contrast is King Noah who ruled in “all manner of wickedness” (Mosiah 11:2). How telling it is, however, that he maintained the appearance of religion, surrounding himself with false priests who could still quote scripture, but burned a true prophet at the stake when he arrived.

A ruler of a nation can fool the people, using the terms and forms they have always embraced, while changing their meaning. This would be in our country, referencing the Constitution and freedoms of the Bill of Rights, while redefining them to be the opposite from their original meaning.

This involves all manner of manipulation and deception which devolves into a kind of groupthink. You can see it in the description of the high priests in Noah’s court. Their seats may be ornamented with pure gold and their breastworks domineering, but they rested their arms upon them “while they should speak lying and vain words to the people” (Mosiah 11:11). They became united around their own false ideas and commitments by squashing, silencing, re-educating, or lighting a torch to those who did not agree with them. Everyone had to see it their way—or else.

Any country that is plagued with disinformation will stumble.

The Book of Mormon reminds us, “we also see the great wickedness one very wicked man can cause to take place among the children of men” (Alma 46:9)

Fourth, a sign of a weakening nation is its divisions, which in turn weaken and disrupt the nation even further. The center cannot hold amidst all the anger.

In the Book of Mormon, we are pelted by stories of the divisions in the Nephite culture. Noah turns against his own people, looking out for himself. The Amlicites war against Alma, the chief judge. The people of Ammonihah mock Alma, and brutally run him out of town. The philosophy of Nehor animates the Zoramites, who turn violently against their own nation.

Amalickiah seeks to vanquish his own people in order to be king.  Dissident Nephites, bent on power and gain become Gadianaton Robbers and want to plunder their own.

On and on it goes until before the coming of Christ, the nation has divided into tribes. Why did this division into tribes finally take place? Obviously their philosophies are so clashing, their enmity toward each other is so vicious, they simply cannot stand each other. Their narratives and justifications for this hatred were well practiced, their justifications perfect.

The Nephites dissenters are more violent and ferocious against their own country than are the Lamanites. Unfortunately, a nation full of hatred and division becomes ripe for foreign invasion.

Fifth, certain groups were lethal in their quest to destroy religion and freedom of speech.

The classic moment when Moroni raises the title of liberty “In memory of our God, our religion, and freedom, and our peace, our wives, and our children happens because all of those things are at stake. They could be lost. Amalickiah, not only “led away the hearts of many people to do wickedly” but his intent “was to destroy the church of God the foundation of liberty, which God had granted them” (Alma 46:10).

Later in Nephi’s time, we meet Nephites, who in order to further their own agenda condemn “the righteous because of their righteousness.” Samuel the Lamanite, who accused them of stoning the prophets, would have arrows slung his way.

So often what motivated the dissenters was their hatred of religion and their desire to destroy it, including the right for a believer to claim what he believed without consequences.

We, who live in an era of twenty-four hour news feeds and social media echo chambers, have all politics, all the time. It is tempting to let our politics become our dominating belief, and read the scriptures and the statements of the Brethren through that lens. It seems more helpful to instead read the world we live in through the lens of scripture, particularly the Book of Mormon that has so much to say about the way we organize and govern ourselves.

Maureen you were inspired to write this insightful article. There are so much treasure in the Book of Mormon. ..so many lessons for us today. Thank you! Love Meridian. Magazine.

This is probably my favorite of all of your articles! Thank you for your valuable insights. We all need to remember to choose moral leaders because when we don't God will no longer protect us.