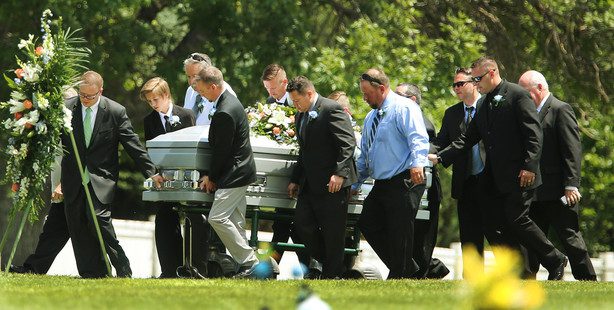 WEST JORDAN — As a Sandy mother and her young son killed in a deadly attack were laid to rest Tuesday, family and friends focused on gratitude in the wake of their grief.

Speaking at a memorial service in West Jordan, Dustin Rackley — the husband of Memorez Rackley, 39, and father of 6-year-old Jase Rackley — said anyone who met his wife knew right away “there was something special about her.”

And his cheerful blue-eyed son, Rackley said, was unfailingly sweet and kind, making new friends wherever he went and filling his family’s home with laughter and cuddles.

Rackley shared a message of appreciation Tuesday on behalf of himself and his surviving two sons, Baelyn and Myles, for the bystanders and an unidentified “good Samaritan” who rushed to help during the deadly June 6 attack; law enforcement and emergency personnel who responded to the scene; doctors and medical staff who cared for Myles at Primary Children’s Hospital; and neighbors, friends and strangers who reached out to the family in the days that followed.

As the family moves forward in “our path of uncertainty and healing,” Rackley shared the advice his mother gave him.

“Learning how to accept help will not only help heal us, but it will help heal others as well,” he said.

Memorez and Jase Rackley died June 6 after being gunned down on a street in their quiet Sandy neighborhood by a man who Memorez Rackley had been dating during the time she was separated from her husband.