Expanding the Mormon Presence in the Interfaith Arena « Meridian Magazine 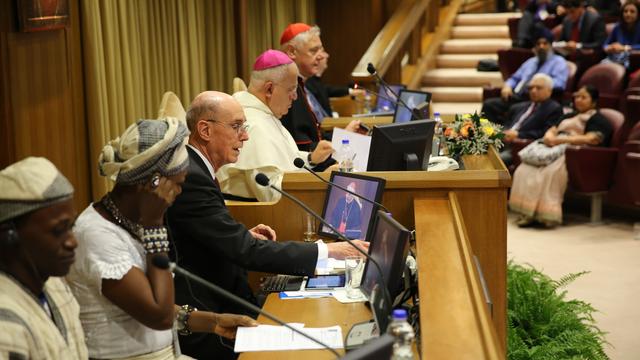 Expanding the Mormon Presence in the Interfaith Arena

Cover image via LDS Newsroom. Colloquium on the Complementarity of Man and Woman at the Vatican, November 18, 2014.

Mormons aren’t joiners. Unlike other religious traditions where “social justice” prompts frequent marches and activism, most Mormons aren’t into protests and boycotts. To be sure, our faith’s history has made Mormons weary of co-religionists. Our idea of “social justice” takes on more practical, get-it-done philosophy. Deliver a loaf of bread, paint the widow’s home, work at church cannery to put-up food for the poor, and make the ubiquitous pan of “funeral potatoes” to serve a deceased’s family after the graveside service.

Indeed, the idea of interfaith association and activism doesn’t come easy to most Mormons. But Mormons are at a crossroads. They need to find common ground with people of other faiths, willing to build bridges of understanding and even defending the religious rights of others when they are trampled on.

To be sure, this interfaith work needs to be genuine and not just a coalition of the like minded on a particular political issue. Mormons learned a tough lesson during the Proposition 8 debate in California. There, Latter-day Saints, some African-American churches, Evangelicals and Roman Catholics created a political coalition in an attempt defend the traditional family. While Mormons saw it as an interfaith coalition, it was a miscalculation, particularly when Mormons became framed as the outside bigoted “other.” Mormon businesses were boycotted, Mormons were fired from jobs and became the object of public derision because of their political contributions to the Proposition 8 fight. It was only a consolation that the California Mormons helped thaw icy relationships with Evangelicals, who have long been the faith’s harshest critics.

Proposition 8’s manifestation of interfaith cooperation needs to be transcended by broader interfaith experiences. Contrast the Proposition 8 campaign with the work of an LDS member in the Philadelphia Interfaith Center of Greater Philadelphia. That came as some council members suggested protests when the Philadelphia transit system lost a First Amendment court case and was forced to run anti-Muslim ads on buses and trains. The LDS member involved in the group suggested a softer approach, a media campaign patterned after the successful “I’m a Mormon” campaign.

That single idea was enhanced by the interfaith discussion and the Interfaith Center of Greater Philadelpia, launched the campaign called “Dare to Understand,” featured on billboards, posters, and bumper stickers throughout the city. The Center also has hosted visits and discussion at sacred spaces and houses of worship around the Philadelphia area to increase understanding rather than stereotyped depictions of Islam. The program joined other ongoing concerts, awards, peace walks and prayers services to build interfaith understanding.

Mormons need look no further than their faith leaders for both word and deed for involvement in interfaith efforts. President Dieter F. Uchtdorf has said: “We honor and respect sincere souls from all religions, no matter where or when they lived, who have loved God. . . We lift our voices in gratitude for their selflessness and courage. We embrace them as brothers and sisters, children of our Heavenly Father. … He hears the prayers of the humble and sincere of every nation, tongue, and people. He grants light to those who seek and honor Him and are willing to obey His commandments”

The institutional church has been active in interfaith humanitarian efforts, partnering with Catholic and Islamic relief agencies for many years. The church’s refugee initiative, “I Was a Stranger,” supporting refugees is an easy entry point for Mormons to individually choose interfaith work. It resonates with Mormons, who historically were refugees themselves from misunderstanding in Midwest of the 1830s. Mormons still honor Quincy, Illinois, a community of only 1,500 people that took in 5,000 Mormon refugees.

Mormons need to become an interfaith Quincy, Illinois. They need to study up on the beliefs of others and look for what the last Swedish theologian Krister Stendahl once termed “holy envy;” recognizing elements, practices or teachings in other faiths that one admires. That doesn’t mean abandoning your own faith, but looking for the best in others beliefs just as you would expect others to look for the best in LDS beliefs.

To be sure, Mormons shouldn’t wait for a church calling in this realm. Mormons should be “anxiously engaged in” this good cause and “do many things of their own free will, and bring to pass much righteousness.” (Doctrine and Covenants 58:37). Whether defending Muslims against hate speech, engaging in dialogue across religious traditions, helping in an interfaith effort to clean up after a disaster, or lending a helping hand to refugees, it’s time for Mormons to expand their service and caring into the interfaith arena.

When studying about other religions, if you look for that which is "virtuous, lovely, of good report, and praiseworthy, " you will probably find it. As just one example of what can be done on a local or individual level, I have had the privilege of learning about the Baha'i Faith over the past decade, and coming to know many members of the Baha'i community. I have had the opportunity to present some fireside-type discussions for local Baha'i communities about similarities between their faith and ours.The Book of Mormon affirms that truth and inspiration are given in various degrees to all nations and people. People of different faiths came and gave talks in Nauvoo, and Joseph Smith helped provide transportation for the local Catholic priest (Fr. Scanlon) to reach his parishioners across the Mississippi river.