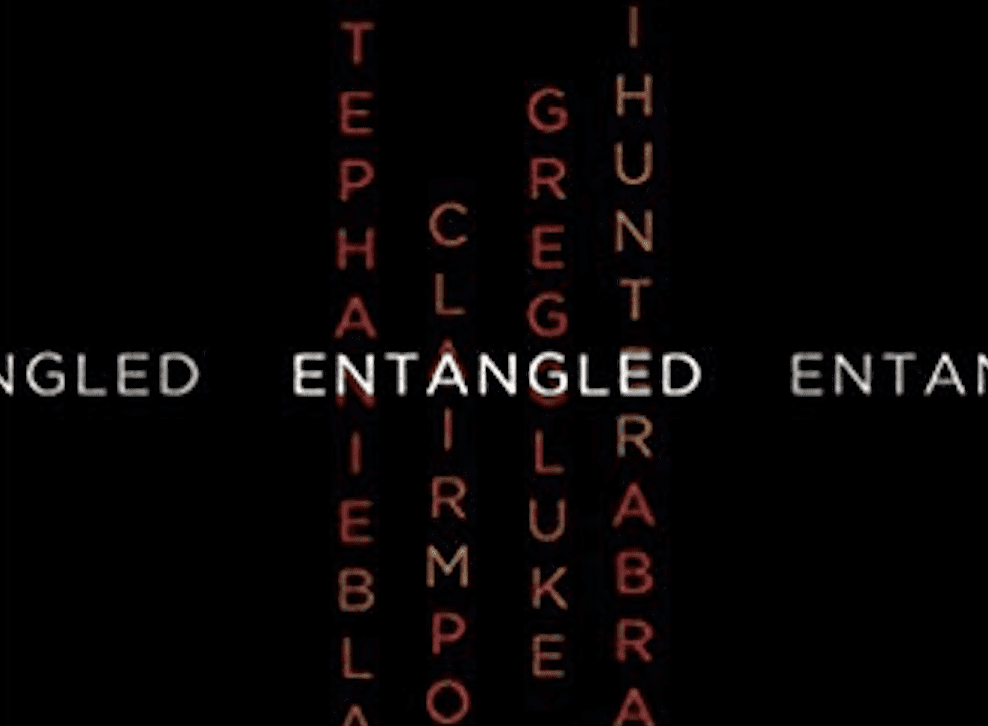 “Entangled”: A Collection of Novellas by Four Great Mystery Writers

One of the best books I’ve read this year is actually a collection of four novellas by four of the best mystery/suspense writers currently publishing. Traci Hunter Abramson starts out the compilation entitled Entangled with Bridge of Trust set in Phoenix, Arizona, featuring Ethan, an FBI agent who has recently transferred to the Arizona office. Checking out the address of a wanted felon and international drug lord, he discovers a dead man and a badly injured woman. To his surprise he discovers she is sheltering a baby boy which she won’t release even long enough to have her wounds cared for and to his horror he learns a second child is missing. He soon learns the man he is hunting wants the baby. He also wants the woman dead. Finding the missing child while protecting the woman and baby become priorities.

The tension is gripping in this story and the plot is well paced. The characters are easy to care for and, as usual, Abramson depicts law enforcement officers and their actions realistically and accurately.

Corrupted by Clair M. Poulson is next. It begins with Lieutenant Jay Tanstall meeting and beginning to date Celeste Pedler, much to their children’s delight. She’s an attorney and he has just been assigned with one other officer to organize and operate an internal affairs unit, an assignment he didn’t want and isn’t too happy about. When Celeste’s thirteen year-old daughter is kidnapped, Jay becomes involved in a desperate search for the girl and dozens of other children who have mysteriously disappeared from the surrounding area and are presumed to be on their way to being sold as sex slaves. Some of the facts don’t add up, creating a suspicion an officer may be involved with the human trafficking group and it’s up to Jay to track down this possibility.

Filled with twists and turns, the reader will enjoy following this tense mystery. As usual Poulson’s characters have a realistic, down-to-earth quality that endears them to readers.

The third novella in this collection is Insidious, a medical mystery by Gregg Luke and is nothing like the first two novellas except for being a compelling page turner. It begins with Andrew Miner, an Olympics pole vaulter hopeful prepping for his turn at the trials. He’s unusually nervous and his body is reacting strangely. He tries to shake off the odd sensations he’s experiencing, but as he runs, his arms refuse to lift the pole, he can’t think clearly, his vision is out of focus, and he runs head-on into the standard, leaving him unconscious with broken bones. Andrew drifts in and out of consciousness at the hospital while his wife, Taryn and his doctor, struggle to discover the cause of his strange symptoms and save his life as his symptoms slowly grow more severe and death appears imminent. Taryn is a pharmacist and his doctor is a leading neurologist. They both study every symptom and possible illness and they don’t always agree, but they develop a strong respect for the other’s abilities. Andrew’s mother also gets involved. She’s a sixties hippie who runs a boutique that specializes in “weed” paraphenalia, pipes, etc. She is convinced all her son needs is some of her “special” brownies and to not be given any “manufactured” drugs.

Luke prefaces his story with this statement, “All the disease states and medicines in this story are real. No exaggerations were made.” The reader may stumble over some of the medical terminology, but the unpronounceable words actually don’t slow down the story. The characters are strong and interesting and the mystery intriguing.

Stephanie Black concludes the foursome with Something Beautiful for Something Evil. Kate and Colby have only been married a couple of years and have just moved to a small town where Kate, an aspiring artist, has been hired to work in a gift shop. While vacuuming her husband’s office, she discovers a strange message from her husband to her boss. Either her husband is having an affair with her boss, Jamie, or as a small business consultant he’s hoping she’ll become a client. Or is he really an undercover government agent? When she confronts Colby he confesses to being an agent and that he is investigating Jamie for links to a terrorist organization. Kate loves the gift shop and the unique art pieces there and is horrified when one of those objects becomes a murder weapon. She’s confused and Jamie is angry when Jamie discovers a doll made to look like herself, but carrying a bucket of poison and with a painfully twisted face. Kate is unsure whether the doll is a nasty joke perpetrated by a disgruntled relative of the former owner or a death threat aimed at Jamie. To help Colby unravel clues connected to the murder, she agrees to distract her boss long enough for him to search her office.

Black’s characters seem like ordinary people, but the situations they face are anything but ordinary. Following the clues to try to guess who and why is half the fun of this novella.

All four novellas are well written with believable characters, great plots, and plenty of suspense. All four authors are also well known, highly respected mystery/suspense writers with multiple awards for their work. Traci Hunter Abramson brings specialized insider knowledge to her writing from her years  working for the CIA. Clair M. Poulson has served in law enforcement most of his adult life. He started as a military policeman, then went on to become a sheriff, then a Justice Court judge. Gregg R. Luke is a working licensed pharmacist. His training included a stint with the Utah Poison Control Center. Stephanie Black is a four-time Whitney Award winner for Best Mystery/Suspense. She has lived in Arkansas, Arizona, Massachusetts, Ireland, and California.