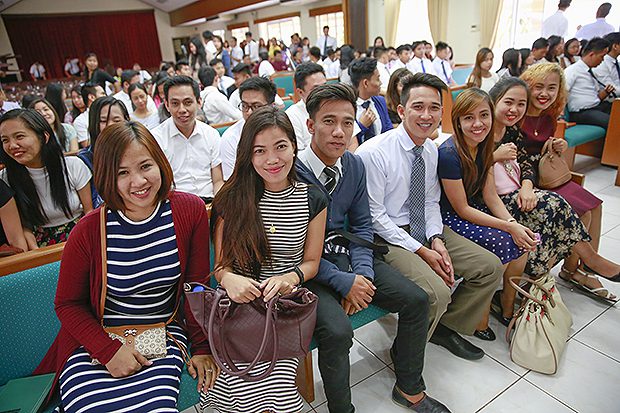 After a recent visit to the Philippines, Elder David A. Bednar of the Quorum of the Twelve Apostles spoke of a sweet phrase he heard often as Filipino Latter-day Saints prayed: “We are so much thankful.” The phrase represents the resilience and faith of a people—despite many and frequent natural disasters—are happy and spiritually strong, said Elder Bednar.

The expression—born by combining English and Tagalog phrases—“reflects a sense of gratitude for simple things,” said Elder Bednar. “It speaks to the goodness of the people. These people are filled with a simple faith—an uncluttered, uncomplicated faith.”

Elder Bednar—accompanied by his wife, Sister Susan R. Bednar—visited the Philippines February 15-27, addressing thousands of Church members and teaching missionaries in seven of the Church’s 22 missions in the nation. Missionary work officially began in the Philippines more than five decades ago, in 1961. Today there are 728,295 Latter-day Saints and two temples in the nation. Elder Bednar also visited two cities—Cauayan and Laoag—which have never before been visited by an Apostle. Elder Bowen said the Philippines is a land of beautiful, God-loving people. “It is also a land of typhoons, earthquakes, floods, and landslides. These natural disasters are a fact of life in the Philippines. It is amazing to see the resilience of the people in the face of these challenges, which never end. When most people would give up, the Filipinos are always ready to rebuild without complaint.”

This resilience was evident in every congregation we visited throughout the country, said Elder Bednar. The members’ faithful resilience makes the expression used when they pray—“we are so much thankful”—even more touching, Elder Bednar said.

To read the full article in the Church News, click here.