Dealing with the "Fake" or Partisan Press: Lessons from the Founding Era | Meridian Magazine 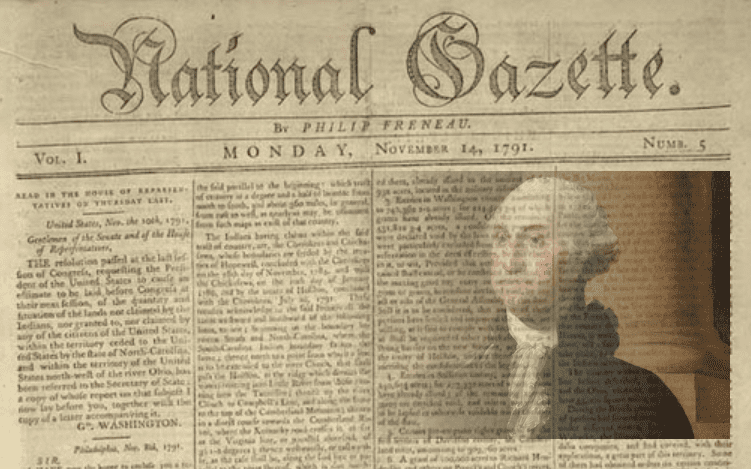 Dealing with the “Fake” or Partisan Press: Lessons from the Founding Era

President Trump has repeatedly attacked the American press, but he crossed the line on August 5, 2018, when he tweeted, “The Fake News hates me saying that they are the Enemy of the People only because they know it’s TRUE. I am providing a great service by explaining this to the American People. They purposely cause great division & distrust. They can also cause War! They are very dangerous & sick!”

There is a measure of truth in President Trump’s vitriolic tweet. It must be acknowledged that the press often fails to live up to its own ethic, which mandates balance and a commitment to accuracy, a commitment often dimmed by blatant partisanship. This is nothing new – the human inclination toward partisanship has been with us since the founding of America. Nevertheless, the President and many Americans, on the left and the right, who are inclined to vilify the partisan press they disagree with, can benefit from lessons learned during the founding era. The press should also be reminded that the right of a free press carries with it a responsibility to act in an ethical manner, to permit an airing of all views to aid in the pursuit of truth.

Shortly after General George Washington’s inauguration as the first President of the United States of America, the unity that swept him into office began to deteriorate. President Washington’s own cabinet divided along partisan lines, with Alexander Hamilton, the President’s chief financial advisor, and Thomas Jefferson, the President’s Secretary of State, wrangling in intensely partisan ways regarding major policy choices. James Madison, a strong supporter of President Washington and leader in the First Congress, was soon siding with Jefferson. Lines were drawn, and two political parties were forming, with the Federalists supporting Washington, Hamilton, and Adams and the Democratic-Republicans (Republicans) supporting Jefferson and Madison.

The leading newspaper in America, The Gazette of the United States (The Gazette), was supportive of the President and the developing Federalist Party. Jefferson and Madison responded by enticing Madison’s college classmate and friend, Phillip Freneau, the “poet of the American Revolution,” to start a newspaper designed to respond to The Gazette’s partisan reporting. Freneau founded The National Gazette and quickly began attacking the Federalists politically and personally, including the venerable President Washington, who was referred to as “monarchical.”

By the end of Washington’s second term, the divide between the two parties, and their newspapers, escalated. New partisan papers were proliferating, siding with the Federalists or the Republicans and their respective candidates for the Presidency, John Adams (Federalist) and Thomas Jefferson (Republican). Through surrogates, the Federalist press attacked Jefferson as a depraved and lecherous atheist, a Jacobin, who favored the bloody aftermath of the French Revolution with its reign of terror and bloody guillotine. The Republican press, in turn, vilified Adams as a “hideous hermaphroditical character,” his “rotundity,” and as a lover and supporter of all things British, including the monarchy.

In two hotly contested elections, the attacks became so vitriolic that Abigail Adams insisted that the opposition press be “suppressed” to avoid a “civil war.” The Federalist Congress responded by passing the Sedition Act, limiting press attacks found to be “manifestly subversive,” asserting that the Republican press might provoke war with Britain.

When members of the Republican press were threatened with imprisonment, the Republicans, led by Madison and Jefferson, responded by securing passage of the Virginia and Kentucky Resolutions, calling on states to join in protesting the Federalist offensive against the constitutional right of a free press. The Virginia Resolution, penned by James Madison, the principle author of the First Amendment, emphasized that the natural rights of conscience and a free press were the pre-eminent rights secured in the Constitution and were essential to the preservation of a nation conceived in liberty.

With Jefferson’s defeat of Adams in the 1800 presidential election, the Sedition Act, with its attendant threat to a free press, died quietly, as Federalists relished the opportunity to attack freely their nemesis, Thomas Jefferson. With the election of the Father of the Constitution, James Madison, to the Presidency in 1808, and the beginning of the Second War of Independence against Britain, press attacks reached a new crescendo. The pro-British press vilified the President, even threatening his life. The pro-Madison press responded, calling the administration’s opponents Tories and traitors. Even though we seldom hear of lives being threatened in the pages of the contemporary press, partisan attacks of the press in the founding era, nevertheless, sound eerily familiar.

The attacks on all sides during the Madison Administration reached a new crescendo, when, on August 24, 1814, enemy British forces marched into the American capital, which is today known as Washington, D.C. The British went directly to the Capitol, where they held a mock Parliament to decide the issue of whether to burn Washington. The vote was unanimous. Amidst cries of jubilation, the British burned the Capitol and then proceeded directly to President Madison’s House. Earlier in the day, Dolley Madison and a few servants courageously labored to save a portrait of President Washington and important state papers, while the President had ridden to the front lines.

After receiving a warning from James, and long after the militia charged with guarding the President’s House and its inhabitants had fled, Dolley finally departed just prior to the arrival of the British forces, who would have delighted in taking her captive. The invaders relished sitting down at the President’s table and eating a meal that had been set for Madison’s return. The British then gathered furniture and personal letters, including precious love letters that Dolley was unable to save, and used them as kindling to burn the President’s House. With the Capitol and President’s House in flames, the British immediately proceeded to accomplish their third objective – the destruction of The National Intelligencer, a pro-Madison newspaper.

Despite threats to his and Dolley’s lives from opposition press, and the British destruction of the pro-Madison press, President Madison remained true to the pre-eminent right of a free press and his constitutional principles, permitting the opposition press to publish their vicious attacks against him even after the burning of Washington. The courageous acts of President Madison, under actual enemy attack, caused former President Adams, the author of the Sedition Act, to declare, “notwithstanding a thousand Faults and blunders [President Madison] acquired more glory, and established more Union, than all his three Predecessors, Washington, Adams and Jefferson put together.” Adams had come to understand what Madison knew – protection of a free and often partisan press can ultimately be a source of unity under a Constitution that respects differences and permits them to flourish in a free dialogue.

Years ago, while visiting with a member of the Supreme Court of Pakistan, at the time when they were resisting the unconstitutional acts of the Prime Minister and were threatened with removal from office, a threat that was acted on, I learned the best prescription for the excesses of a partisan, and perhaps even occasionally fake, press. The Justice began each day by reading five newspapers, each representing a differing and generally opposing perspective. Despite often reading vicious attacks directed at him and the other Justices, my friend knew what a hero of his, James Madison, knew – it is far better to have the views of opposing forces out in the open, rather than driving them underground.

He also was a strong enough person to read even the opposition press with an open heart and mind, seeking whatever truth could be found therein. I have followed that example, and it has blessed my life, causing me to be deeply grateful for a free press and all that can be learned in its pages. Madison was right – the freedom of the press, like the right of religious conscience, are necessary to the functioning of good and wise government and are gifts of God, natural rights.

Rodney K. Smith directs the Center for Constitutional Studies at Utah Valley University. His books, JAMES MADISON: The Father of Religious Liberty, and JAMES AND DOLLEY MADISON: An Unlikely Love Story that Changed America, are to be published in 2019.

I always find it humorous (and frustrating) when FOX is vilified. They are no more or less partisan that ABC, NBC, CBS, CNN, Huff PO, MSNBC, & the NYT. The difference: FOX doesn't pretend that their opinion shows are middlin,' only that they strive to present opposing views on those programs & that their actual hard news programs, like Bret Baier & Shepherd Smith are balanced; Those noted above pretend to be balanced & give opposing views a shot, they probably even believe they are not partisan hacks, yet, the boot licking they do of the Democrats & the derision with which they treat conservatives is clear.

Mr. Madison is the 'Father of the Constitution', Father of the Bill Of Rights, Father of the 2nd Revolutionary war, one of authors of the Federalist Papers, and also the author of the 'Notes of the Federal Convention.' He is a man to be studied and Mr. Smith really does 'Go to Washington' when he writes correctly of the great James Madison. God bless America and the Dream of liberty and Freedom.