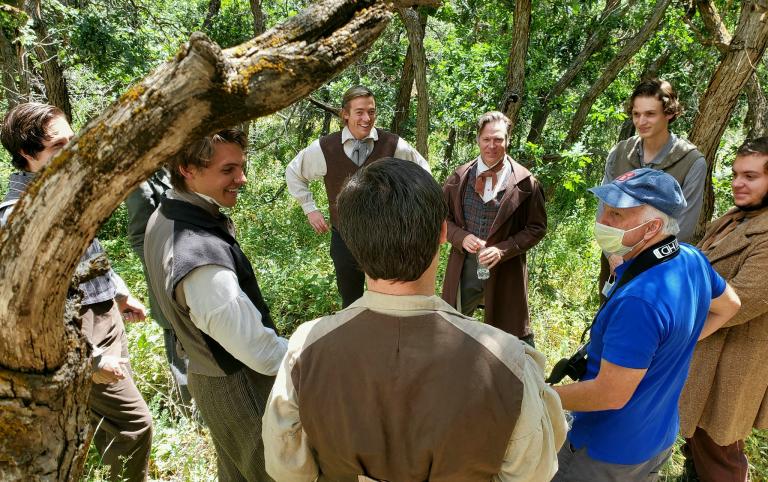 Cover image: The director of both “Witnesses” and “Undaunted,” Mark Goodman, on the movie set with Joseph Smith and the Eight Witnesses.

In an 1850 debate with several Christian ministers, John Taylor — the British-born member of the Council of the Twelve who would eventually succeed Brigham Young to serve as the third president of the Church of Jesus Christ of Latter-day Saints, and who was grievously wounded in the same anti-Mormon mob attack on the jail at Carthage, Illinois, that killed Joseph and Hyrum Smith — spoke about his relationship with the Prophet Joseph:

I was acquainted with Joseph Smith for years. I have traveled with him; I have been with him in private and in public; I have associated with him in councils of all kinds; I have listened hundreds of times to his public teachings, and his advice to his friends and associates of a more private nature. I have been at his house and seen his deportment in his family. I have seen him arraigned before the tribunals of his country, and have seen him honorably acquitted, and delivered from the pernicious breath of slander, and the machinations and falsehoods of wicked and corrupt men. I was with him living, and with him when he died, when he was murdered in Carthage jail by a ruthless mob. . . .

I have seen him, then, under these various circumstances, and I testify before God, angels, and men, that he was a good, honorable, virtuous man—that his doctrines were good, scriptural, and wholesome—that his precepts were such as became a man of God—that his private and public character was unimpeachable—and that he lived and died as a man of God and a gentleman. This is my testimony. If it is disputed, bring me a person authorized to receive an affidavit, and I will make one to this effect. I therefore testify of things which I know and of things which I have seen.  (The Gospel Kingdom, 355)

On another occasion, he testified that

Joseph Smith was a virtuous, high-minded, honorable man, a gentleman and a Christian. But he introduced principles which strike at the root of the corrupt systems of men. This necessarily comes in contact with their prepossessions, prejudices, and interests; and as they cannot overturn his principles, they attack his character. And that is one reason why we have so many books written against his character, without touching his principles, and also why we meet with so much opposition. But truth, eternal truth, is invulnerable. It cannot be destroyed, but like the throne of Jehovah, it will outride all the storms of men, and live for ever.  (The Gospel Kingdom, 355-356)

From a letter written by Josiah Stowell (1770-1844), who employed Joseph Smith roughly 1825-1827 (i.e., before the restoration of the Church and the publication of the Book of Mormon), to J.S. Fuller.  The letter, the original of which is located in the LDS Archives, is dated 17 February 1843.  See Mormon Enigma: Emma Hale Smith, by Linda King Newell and Valeen Tippetts Avery (1994), 17:

He [Joseph Smith, Jr.] was a likely young man & at that time did not Profess religion he was not a Profain man although I did once in a while hear him Swair he never gambled to my knowledge…. I well know he was no Horse Jocky for he was no Judge of Horses I sold him one that is old…. I never new him to git drunk I believe he would now and then take a sip…. I state this for fact that any thing from what I have said about Joseph Smith that is wors than I say is fals & untru.

Such as may be liked; pleasing; as a likely man or woman.

[This use of likely is not obsolete, as Johnson affirms, nor is it vulgar. But the English and their descendants in America differ in the application. The English apply the word to external appearance, and with them, likely is equivalent to handsome, well formed; as a likely man, a likely horse. In America, the word is usually applied to the endowments of the mind, or to pleasing accomplishments. With us, a likely man, is a man of good character and talents, or of good dispositions or accomplishments, that render him pleasing or respectable.]

When Mr. Stowell says that Joseph “did not profess religion” in the mid-1820s, I suspect that he means to say that Joseph was not an active participant in any of the area churches.

Josiah Stowell joined the Church of Jesus Christ of Latter-day Saints when it was founded and, although he never went west with the Saints, he evidently continued to express his belief in Joseph Smith as a prophet throughout the remainder of his life, indicating that he still hoped to join in the gathering of the Church.