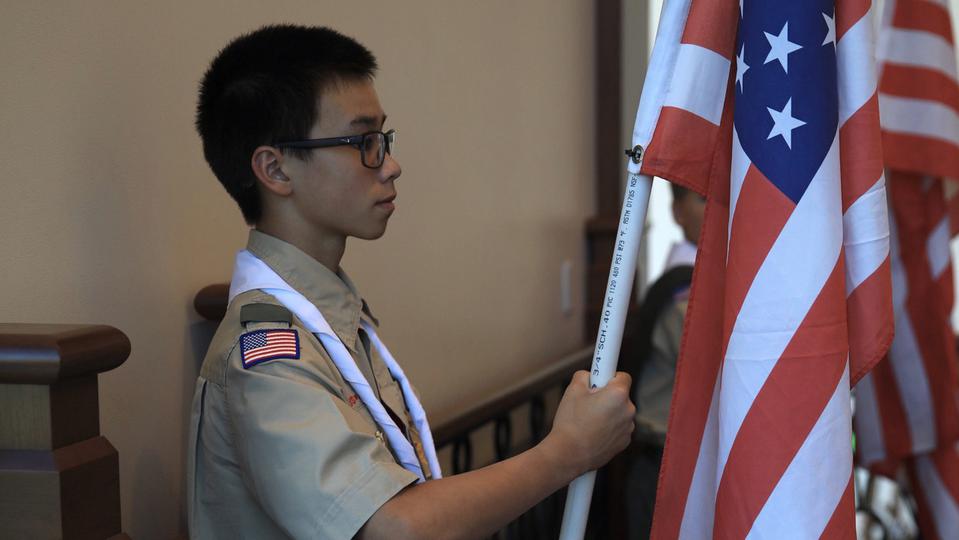 “This is a wonderful partnership,” Elder Ronald A. Rasband, a member of the Quorum of the Twelve Apostles, said of his personal involvement in Boy Scouts of America. “I am a product of this [BSA] of an earlier day in my life with Boy Scout Troop 95.” He said his Scoutmasters and his mother helped him get through the Scouting ranks.

Elder Rasband represented the Church at a recognition dinner and commemoration gala honoring The Church of Jesus Christ of Latter-day Saints at the Hale Centre Theatre in Sandy, Utah, on September 3, 2019.

The national office of the Boy Scouts of America (BSA) and the Great Salt Lake Council organized the event to recognize the Church for the more than century-long partnership the groups share, working together to build young men into respectful, upstanding citizens.

The gala included pictures of leaders of the Church and the history of how the two organizations have partnered for 106 years.

“One of the things that’s been celebrated tonight is Scouting is better because of The Church of Jesus Christ of Latter-day Saints,” said Mike Surbaugh, BSA’s chief Scout executive.

Referring to the excellent relationship the Church has had with Scouting, Surbaugh remarked, “It’s our way of celebrating and saying thank you for the partnership we have had.”

“If I didn’t have so much excitement about the future and knowing what the Church is going to do, I’d be very sad,” Elder Rasband said. “I have wonderful feelings of the legacy of Scouting, and I have a tremendous anticipation about the new worldwide initiative for children, boys and girls and our youth.”

Upon conclusion of the gala, the audience stood and repeated the Scout Law, and a bugler played “Retreat.”