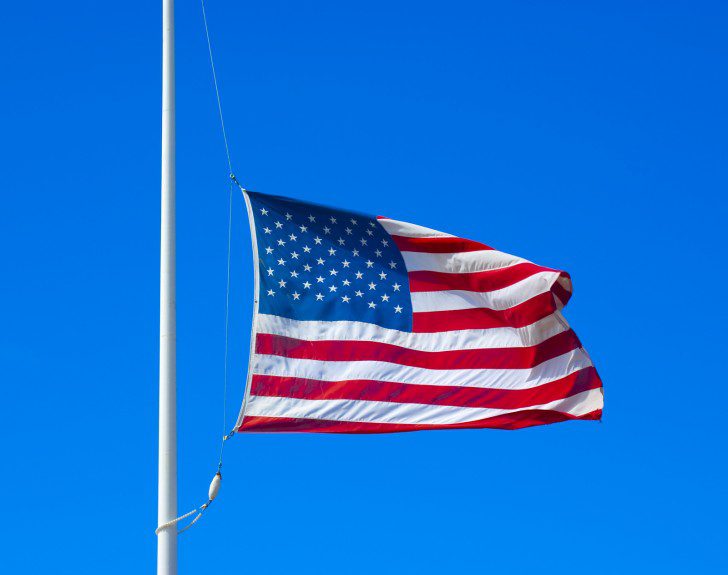 Blaming Christians and Mourning in America

This is from Tony Perkins of the Family Research Council.

Today’s observance of Flag Day has been a somber one, as thousands of stars and stripes now fly at half-mast — a grim reminder of the weekend’s tragedy that took the lives of 49 Americans. Just as sobering, there is very little evidence that liberals are ready to unite under that banner and grieve as a national family. While the country tries to pick up the pieces after another senseless act, the political Left is making it increasingly clear that it isn’t interested in healing but deepening divides.

Yesterday, in a shameful scene on the House floor, Democrats refused to set aside their differences even for 16 seconds of reflection. Instead, angry opportunists turned the chamber’s moment of silence into a political stunt, disgracing Congress — and the men and women who were murdered in Orlando. While the nation mourned a massacre barely a day old, the president’s party couldn’t stand to work with Republicans for a single day to move the country forward. There wasn’t even a pretense of solemnity when House Minority Leader Nancy Pelosi (D-Calif.) announced that Democrats have “had enough” of moments of silence and stormed out. Others followed, while some yelled, “Where’s the [gun control] bill?” and “No leadership!” at Speaker Paul Ryan (R-Wisc.). And liberals accuse conservatives of disrespect? How do they expect Americans with opposing views to coexist when they won’t?

What a difference 15 years makes. Anyone who thinks back to 9/11 remembers the calls to prayer that swept the nation. Bibles became as common as flags in the neighborhood yards. People united under God and patriotism to combat an enemy at war with everything America stands for. Now, after seven and half years of President Obama’s anti-faith hostility, even calling leaders to a moment of silence results in outright mockery. That should alarm everyone.

Speaker Ryan tried to diffuse the tension by bringing the focus back on the people and ideology responsible. “We need to be clear-eyed about who did this. We are a nation at war with Islamist terrorists… It is a threat to our people at home and abroad.” The reality of the situation mattered little to Democrats, who refused to acknowledge the Islamic elephant in the room and instead used the tragedy as an excuse to pitch radical LGBT legislation. “Passing the Equality Act is the most important signal we can send as a country that we don’t tolerate discrimination,” Rep. Sean Patrick Maloney (D-N.Y.) argued. Obviously, the New York congressman graduated from the Rahm Emanuel school of political opportunism. “You never want a serious crisis to go to waste,” the president’s chief advisor stunned people by saying in 2008. “[C]risis provides the opportunity for us to do things that you could not do before.” The Left has certainly taken his advice to heart, twisting the killing into a sickening push for everything from gun control to the end of religious liberty.

And the Left’s Christian blame game goes on. It’s the religious right, columnists rant, who created this “toxic climate” with their Kim Davises and H.B. 2s. Citing North Carolina and Mississippi, liberals insist, “The Christian right has introduced 200 anti-LGBT bills in the last six months, and people are [pointing the finger at] Islam for this. No.” First of all, people are blaming radical Islam because the shooter did. Secondly, it’s a little ridiculous to suggest that disagreements over special rights for people who identify as LGBT are responsible, since even the gunman’s ex-wife alleges he was gay. While the investigation is ongoing, the 29-year-old Islamist was reportedly a regular at gay clubs, tried to get romantically involved with a male coworker, and had profiles on several gay dating apps. It’s time for liberals to stop tiptoeing around the obvious and embrace what the facts already do: which is that a hateful ideology — not guns, Christians, or anti-Muslim sentiment — is to blame.

On this, Donald Trump is right. “… [T]he current politically correct response cripples our ability to talk and think and act clearly. If we don’t get tough, and we don’t get smart — and fast – we’re not going to have a country anymore. There will be nothing left.” It’s time to stand together in “refus[ing] to allow America to become a place where gay people, Christian people, and Jewish people, are the targets of persecution and intimidation by Radical Islamic preachers of hate and violence.” Otherwise, the terrorists have already won.

I first learned of the Islamic terrorist attack in Orlando from an email I received on Sunday morning. I hadn’t turned on the news, but I checked my messages and found this:

“Are you happy now??? This is where your Christian bigotry leads.”

I wasn’t sure what it meant, but I had a couple of other emails similar in content and tone, so I knew something must have happened. Quickly, I discovered that a Muslim in Florida had massacred dozens of people at a gay club.
If you’re a little naive, you might be surprised and somewhat confused by the way these events unfolded. Why would I be blamed for Muslim terrorism? I’m a Christian, not a Muslim. The shooter, Omar Mateen, pledged his allegiance to ISIS, not to any church, and certainly not to any conservative blogger on the internet. Mateen and his fellow militant Muslims aren’t motivated by Christian beliefs, and they do not desire to follow the same path as those who follow Christ. ISIS routinely drives that point home by marching Christians out into the desert and hacking off their heads…
Nevertheless, all tragedies must be useful for the left, and they will make it so, no matter what. Here are just a few examples of them making it so:
1 Comment | Post or read comments

It is sad to see such misery, but Comparing our times to those in the Book of Mormon, I make a evaluaton. When the Nephites fell away from the Gospel and sinned, the Lamanites came marching in. How the Nephites morned about their lost and eventually returned to God, who eventually blessed them with victory, but only after they repented. We in the "Christian" nations have again left God in the furthest corner, break freely His commandments, and abide in that spacious house seen by Lehi. Isn't it time to repent and put God first in our lives? We in the Church are not fulfilling our duty to warn the people! We tolerate sin too much! Do we hold the commandments of God and follow the prophets? Wake up modern Nephites!