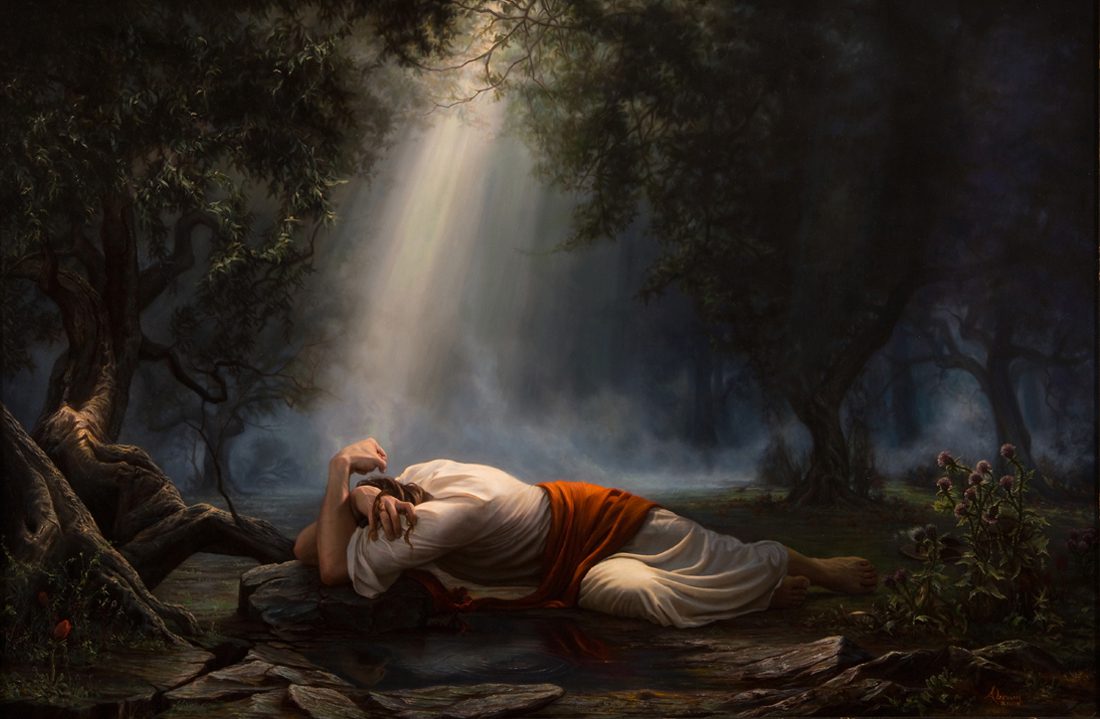 The Savior’s commitment to doing the will of the Father was one of absolute, unconditional devotion.

So, from beginning to end, the Savior’s chief focus was doing—without compromise—the will of His Father. As Elder Neal A. Maxwell noted, “His grip on Himself represented all mankind’s grip in immortality and eternity. But He held fast!” (“The New Testament—A Matchless Portrait of the Savior,” New Testament Symposium, BYU, 23 Feb. 1985.)

During the dedicatory prayer on the Nauvoo Temple, the Prophet Joseph implored: “Thy word must be fulfilled…Thy will be done, O Lord, and not ours. …O Lord, remember thy servant, Joseph Smith, Jun., and all his afflictions and persecutions—how he has covenanted with Jehovah, and vowed to thee, O Mighty God of Jacob—and the commandments which thou hast given unto him, and that he hath sincerely striven to do thy will” (D&C 109:44, 68).

The Prophet Joseph encouraged the Saints to be devoted to doing the Father’s will, and to follow the examples of prophets and apostles—especially of the Apostle Paul. In a letter to the Church, written in March 1834, the Prophet Joseph wrote:

“In the 22nd chapter of Matthew’s account of the Messiah, we find the kingdom of heaven likened unto a king who made a marriage for his son. That this son was the Messiah will not be disputed, since it was the kingdom of heaven that was represented in the parable; and that the Saints, or those who are found faithful to the Lord, are the individuals who will be found worthy to inherit a seat at the marriage supper, is evident from the sayings of John in the [Book of] Revelation where he represents the sound which he heard in heaven to be like a great multitude, or like the voice of mighty thunderings, saying, ‘the Lord God Omnipotent reigneth. Let us be glad and rejoice, and give honor to Him; for the marriage of the Lamb is come, and His wife hath made herself ready. And to her was granted that she should be arrayed in fine linen, clean and white: For the fine linen is the righteousness of Saints’ (Rev. 19).

“That those who keep the commandments of the Lord and walk in His statutes to the end, are the only individuals permitted to sit at this glorious feast, is evident from the following items in Paul’s last letter to Timothy, which was written just previous to his death,—he says: ‘I have fought a good fight, I have finished my course, I have kept the faith: henceforth there is laid up for me a crown of righteousness, which the Lord, the righteous Judge, shall give me at that day: and not to me only, but unto all them also that love His appearing.’

“Though he once, according to his own word, persecuted the Church of God and wasted it, yet after embracing the faith, his labors were unceasing to spread the glorious news: and like a faithful soldier, when called to give his life in the cause which he had espoused, he laid it down, as he says, with an assurance of an eternal crown.

“Follow the labors of this Apostle from the time of his conversion to the time of his death, and you will have a fair sample of industry and patience in promulgating the Gospel of Christ. Derided, whipped, and stoned, the moment he escaped the hands of his persecutors he as zealously as ever proclaimed the doctrine of the Savior. And all may know that he did not embrace the faith for honor in this life, nor for the gain of earthly goods. What, then, could have induced him to undergo all this toil? It was, as he said, that he might obtain the crown of righteousness from the hand of God. No one, we presume, will doubt the faithfulness of Paul to the end. None will say that he did not keep the faith, that he did not fight the good fight, that he did not preach and persuade to the last. And what was he to receive? A crown of righteousness.

“Reflect for a moment…and enquire, whether you would consider yourselves worthy a seat at the marriage feast with Paul and others like him, if you had been unfaithful? Had you not fought the good fight, and kept the faith, could you expect to receive? Have you a promise of receiving a crown of righteousness from the hand of the Lord, with the Church of the Firstborn? Here then, we understand, that Paul rested his hope in Christ, because he had kept the faith” (JSPapers, Letter to the Church, March 1834, 144).

Those coming into the Church today who are helping to move the cause of the Restoration forward are “the pick and flower” of the premortal life—choice spirits who have been held in reserve to come forth in this day, who have “come to the kingdom for such a time as this” (Esther 4:14; see also Abr. 3:22-23). President Gordon B. Hinckley said, he believed they “are the best generation this Church has ever had” (BYU-Idaho, Oct 22, 2002), and described the young women in the Church as “the best generation in the history of the world” (Worldwide Young Women fireside, Nov. 10, 1986).

The changes and adjustments made in The Church of Jesus Christ of Latter-day Saints over the past year indicate that the Savior stands at the head of His Church, and leads it via revelation to prophets and apostles, and has reserved choice individuals to help move the work forward at this time. “It’s clear God has a vision for His Church at this time. His prophet, President Russell M. Nelson, shared a glimpse when he said, ‘If you think the Church has been fully restored, you’re just seeing the beginning. There is much more to come.’ At the Rome Italy Temple dedication, where Latter-day Saints witnessed even more historic firsts, President Nelson added, ‘This is a hinge point in the history of the Church. Things are going to move forward at an accelerated pace. … The Church is going to have an unprecedented future, unparalleled. We’re just building up to what’s ahead now.’” (“The most important change that has to happened for the Church’s ‘unprecedented future’,” LDS Church News, 29 Mar. 2019). As we prepare to commemorate the 200th anniversaries of the events in the Prophet’s life and ministry, and as we think about good things yet to come, it’s good to remember that his motivating drive was because, as he said: “I am lover of the cause of Christ.

If one compares oneself to the labors and efforts of Paul the vaunted Apostle, as Joseph Smith intimated, we come short'of the glory of God.' May it be so that we all strive to 'follow Christ' as Paul sacrificed his life for the kingdom of the Messiah.