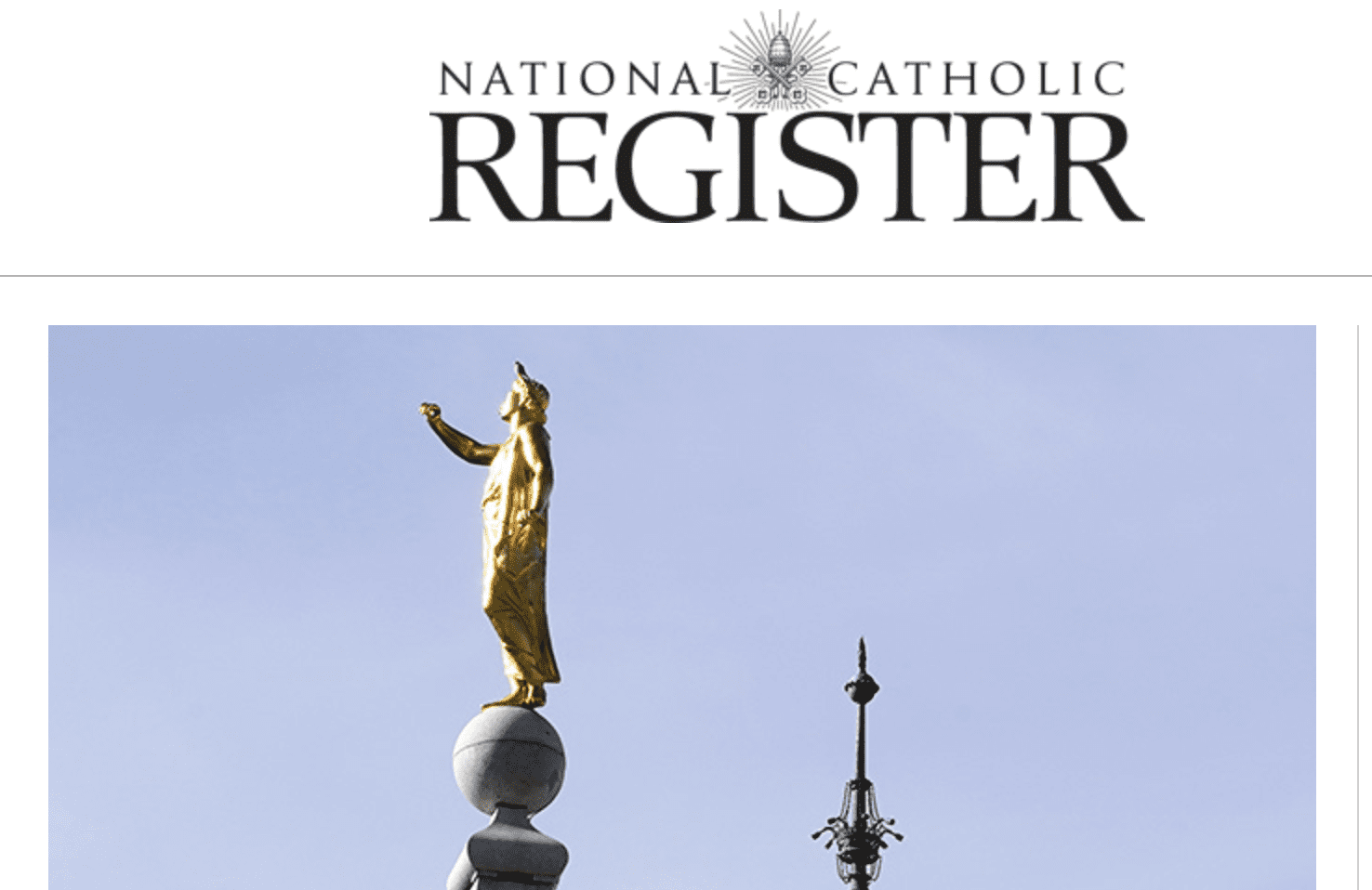 Joel Campbell is an associate professor of journalism at BYU . He researches. writes and teaches about media and religion. He does not speak for BYU or any other organization. This column reflects only his opinion and should not be construed as a news report.

It’s always a bit breathtaking in 2020 when legitimate religious news organizations publish columns and articles that sound like they came straight out of 19th Century anti-Latter-day Saint screeds.

It was disconcerting to read a recent article from Anna Abbott, a National Catholic Register blogger based in Massachusetts, in this era of interfaith understanding and bridge building between Roman Catholics and Latter-day Saints. It reads more like a random bunch of news items pulled from the Internet, combined with sections from an old, dusty anti-Latter-day Saint tract, and woven together in an ill-conceived attack on The Church of Jesus Christ of Latter-day Saints. She does this while comparing it to her own, apparently controversy-free and never-changing, Roman Catholic faith.

The column entitled, “Mormon founder Joseph Smith built a house on shifting sand,” dug up all of the usual tropes weaponized against Latter-day Saints since the 1800s.

Her misleading narrative says a recent earthquake that shook free the trumpet on the angel Moroni on top of the Salt Lake Temple was symbolic of the shifting doctrine in the church. Nice analogy that doesn’t work. From her apparent reading of news reports, she incorrectly asserts that Latter-day Saints have abandoned core family principles in the face of LBGTQ issues. For example, she wrote BYU allowed same-sex partners to perform a dance championship and BYU had briefly “changed” its Honor Code to allow same-sex dating and then backtracked on it. She also criticized church leaders for not opposing the decriminalizing polygamy in Utah.

Sadly, Abbott’s column fails at both journalistic ethics espoused by groups such as Religion News Association  and a religious fairness test once presented by Krister Stendahl. Stendahl, the former bishop of Stockholm and former dean of the Harvard University School of Divinity, said to not follow these rules was to “bear false witness” and so Abbott does.

Stendahl’s rules for religious engagement are three-fold (in italics):

— “Let the ‘other’ define themselves. Don’t think you know the other without listening.”

Abbott failed to understand the nuances of issues facing Latter-day Saints other than to pass black and white “they’re wrong” judgment. She cites few sources other than her own home-cooked opinion. This is neither good reporting nor good commentary.  There’s no evidence she even spoke to a Latter-day Saint for the story. Even a chat with a Catholic academic who studies the Latter-day Saints would have been helpful. Wouldn’t Catholics expect that from a Latter-day Saint publication writing about them? I think there’s something in the Bible about that, too.

— “Compare equal to equal, not my positive qualities to the negative ones of the other.”

Along with “bearing false witness,” this comparison game is Abbott’s most glaring problem. Abbott paints a picture of inconsistency in Latter-day Saint doctrine as a negative proof of its failure, while comparing it to her faith without mentioning its centuries of documented problems, foibles and missteps. She uses scriptures when it fits her narrative, but conveniently skips over Old Testament passages about patriarchs and their plural wives. Why does Abbott need to prove Latter-day Saints’ doctrine is wrong to prove Catholic teaching is correct? It’s not only unfair, it’s mean-spirited. It’s unfortunate that in 2020 there can’t be more respect for what Christians agree on in the face of attacks of religious freedom and basic human rights around the world.

— Find beauty in the other so as to develop “holy envy.”

Finding “holy envy” may go beyond the calling of a journalist, but Abbott is a columnist who can express an opinion. Couldn’t she find anything in the good news about Catholic-Latter-day Saint involvement on issues such as large humanitarian projects or religious freedom? Here’s a story from last year: https://cruxnow.com/church-in-the-usa/2019/03/in-utah-catholics-mormons-have-long-had-positive-cordial-relationship/.

And, of course this historic meeting between President Nelson and Pope Francis: https://www.deseret.com/2019/3/10/20668250/pope-francis-meets-with-president-nelson-in-the-vatican.

Her nonsensical journey through the news and her misinformed opinion show just how shallow her understanding is. As with reporting about any religious group, including Catholicism, there is much more nuance and complication that can’t come through aggregating a bunch of news items. Instead of facts, we get the same-old “anti-Mormonism.” You would think editors at a Catholic newspaper of some repute would be cognizant of this kind of poor and emotion-laden reporting. Jews, Catholics and Latter-day Saints have all been victimized by this kind of work for a long time.

To quickly counter her arguments:

— I doubt Abbott has ever heard of “The Proclamation of the Family” and its core doctrine that marriage is only between a man and a woman.  It’s relationship to the modifications of the BYU Honor Code was a misunderstanding by those who read the changes in the code. It was also a failure of a public relations apparatus unprepared to quickly respond to an onslaught of wishful LGBTQ activism and media reporting. The fact is that “change” in the Honor Code did not change anything about core church doctrine. Ironically, the modifications made it more similar to other religious institutions, including that very Catholic Notre Dame U. Abbott, who may have understood this with a chat with a source familiar to the issue. She both mischaracterized it and then weaponized it against Latter-day Saints. That’s simply wrong.

— That BYU allowed same-sex partners to participate in a national dance competition on campus, should come as no surprise to those Catholics who sponsor college campuses. On religious campuses across the nation, pressure from the NCAA and other national and international organizations allow LGBTQ participants from other schools. A call by Abbott to Notre Dame U., Gonzaga U. or Boston College would find those schools with Catholic connections are allowing same-sex athletes from other schools to participate at events on campus.

Just like BYU, these campuses also have government-granted exemptions to have enrolled students adhere to their unique standards of conduct.  And just like BYU, these campuses are also finding ways to be accepting of LGBTQ students within the limits of church doctrines. This is not a shift of core doctrine, it is an accommodation to all involved in intercollegiate sports and activities as well as providing a safe environment for all on campus. So, because BYU does it, Joseph Smith is a fraud? Because Catholic schools do it, where is the criticism?

–When it comes to polygamy decriminalization, Abbott displayed naiveté about the separation of church and state in Utah and provided the counter-argument to her own anti-Latter-day Saint axe-throwing. She wrote: “LDS officials have been strangely silent on Utah’s decriminalization of polygamy. (President Russell M.) Nelson and the General Authorities said nothing in support or opposition when the law was debated; it contrasts with their public statements on pornography and marijuana. The subject went unaddressed at the recent General Conference this April.”

Her statement leaves rank-and-file Latter-day Saints scratching their heads. Wait? What? Why would they address that? It’s not strange at all they wouldn’t talk about it. Latter-day Saints don’t practice polygamy. That fact is that anyone who has any part in polygamy is excommunicated from the church just as the quote from President Gordon B. Hinckley, misused in the column, said. Abbott misses the important distinction between The Church of Jesus Christ of Latter-day Saints and offshoots which still practice polygamy. They aren’t the same thing and neither is the state of Utah and the church.

Abbott wants to make her readers believe that that church has power to change the law and the church and polygamy are inexorably connected. That’s the purview of the Utah Legislature and there’s a lot of resentment in Utah about any time the church steps in to influence legislation. Just ask Catholics in Utah. Therefore, the church has no reason h to lobby against it, since it banned polygamy in 1890. The church doesn’t have a dog in the fight. For Latter-day Saints, it’s a dead letter that was buried with our ancestors three or four generations ago.

The Legislature’s issue is with groups which practice polygamy, not The Church of Jesus Christ of Latter-day Saints. To argue that the church’s doctrine is shifting because it isn’t fighting decriminalizing something it hasn’t practiced in 130 years is absolutely illogical. It’s like suggesting Catholics should now oppose legislation in Israel decriminalizing the Crusades. Think how much better the column would have been if Abbott had talked to real Latter-day Saints, as Stendahl and journalism groups suggest.

To round out her ill-conceived arguments about Latter-days, is that they participated in Proposition 8 campaign. It didn’t change core doctrine as stated in the Proclamation of the Family, but was modified in compassion and through experience. Has not the implementation or practice related to Catholic core doctrines not been modified or innovated many times over the centuries? Has the Catholic hierarchy always gotten a policy right on its first blush? It’s like arguing the myriad of changes and innovations brought through Vatican II mean that the Roman Catholic Church is on a slippery slope.

So instead of thoughtful comparisons, Abbott gives us a pollyannaish white-washed version that shows Catholic doctrine is stable and never changing. “The Catholic Church is built on the firm foundation of Scripture, Tradition and natural law. Its teachings on marriage and family are protected by the Holy Spirit from the whims of popular demand. Mormonism, with its constantly changing doctrine, is like the house built on sand (Matthew 7:26-27) — not the Church rooted firmly on the rock (Matthew 7:24-25).” It’s hard to believe that someone can argue straight-faced that Catholic liturgy, sacraments, traditions, practices and policies have remained unaltered since the time of Christ.  Since I refuse to violate the rules I suggest that Abbott follows, I leave it at that. Next time, let’s hope The National Catholic Register gives a bit more respect and maybe even some holy envy.

Apparently, Ms. Abbott, does not understand the Catholic belief in polygamy. All sisters (nuns) make marriage vows with Christ and wear a ring on their right hand.

Thank you for the spot on commentary! She prolifigates her lies and misinformation exactly like the national mainstream media!