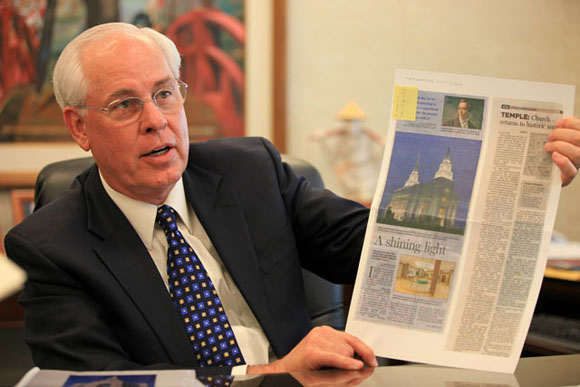 An interview with Elder William R. Walker, the executive director of the temple department.

In 1838 when a Joseph Smith languished cold and miserable in Liberty Jail, heartsick about the Saints being driven from Missouri without his protection, he called out, “O God where art thou?” He may not have known that a century and a half later a glorious temple would be built just six miles away from the place where he suffered.

The Kansas City Missouri Temple will be dedicated this Sunday, May 6, 2012 following an open house attended by more than 90,000 people and the press and public have been impressed.

In a tender moment, when Elder William R. Walker, executive director of the temple department was taking Missouri Governor Jay Nixon on a tour, the governor stopped in a sealing room and asked if he could say something.

“This is a great day of accomplishment for your people,” he said. “For us this is a time of healing. The people of Missouri have not always treated your people the way they should have. I hope all of that is now behind us.

“On behalf of the six million citizens of the state of Missouri, we express our commendation for you on the building of the magnificent temple.” Both Gov. Nixon and Gov. Sam Brownback of Kansas presented certificates of special commendation to the Church.

Elder Walker said that as he took some of the press through the temple, it was clear they had been briefed on the story of the Latter-day Saints being driven from the state with an extermination order on their heads. Some of the reporters wanted to talk about the horrible things that the Saints had experienced in those times, but Elder Walker said, “We don’t want to focus on those things now, but look ahead.

“Do you know what’s wonderful about Liberty Jail for Latter-day Saints?” he said. “It is the revelations that were received here. They are some of the most wonderful, sublime scriptures we have. A 16-year old in Okinawa is going to know about Liberty, Missouri because of the revelations that were received here. There is more psychology and sociology, more insight into the human heart, in those sections than in any graduate course.”

Ironically, Elder Walker could have said that his own great, great grandparents were driven out of Jackson County, but turned the reporter instead to the future. 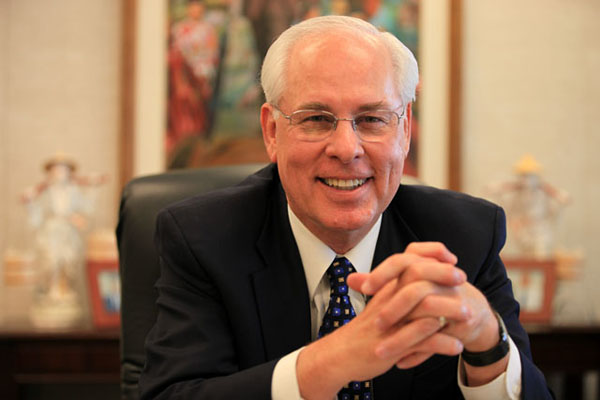 Journalists who toured the temple, like a reporter from CNN, found it to be “A Rare Tour of a Mormon Temple,” and emphasized that though it was the public’s first chance to see the temple, it would also be their last. “After that,” he wrote, “only temple-recommended Mormons will be able to walk through the heavy wooden and stained-glass doors.”

Elder Walker said that in the last five years, the Church’s invitations to the press and the VIPs to tour the temples during open houses have been readily accepted as more and more interest has been piqued about what truly goes in an LDS temple.

“Now when we invite a governor to a temple open house,” said Elder Walker, “they usually come. It’s a wonderful thing.” When the Gila Valley temple had its open house in Arizona, the governor flew just to tour the temple, and then flew out again that day.”

The Kansas City Star placed their story about the new temple on the front page, with a full-color photo all headlined by the title “A Shining Light.” One Latter-day Saint who attended high school in Kansas City, was teary when he saw the headline. “I never thought I’d see the day, when the Church received such positive press here.”

One journalist asked what others have wondered, “Why wasn’t this temple build in Jackson County where Joseph Smith said a temple would be built some day. Elder Walker said when the First Presidency made the decision to build a temple in Kansas City, Missouri, they did not say it needed to be in Jackson County and they didn’t say it shouldn’t be. That is not what they were thinking about. They wanted to build a temple that would be convenient for the members. They made their decision based on beauty and access.”

One journalist walked into the Celestial room an audibly gasped “there was such a heavenly spirit there,” said Elder Walker

One Associated Press reporter asked Elder Walker what this temple means, and he replied, “It means we’re back.” 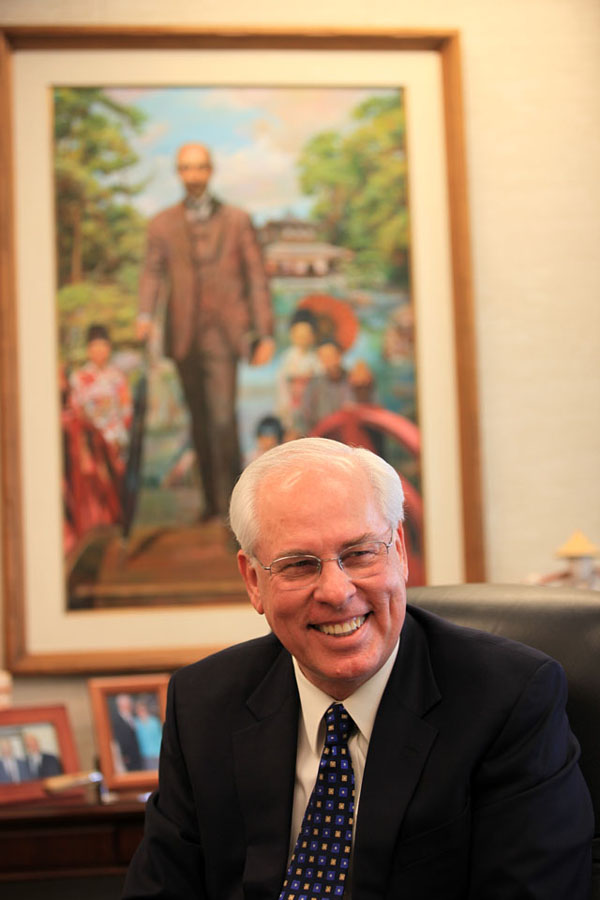 When the public slips on those booties, typical of a temple open house, and enter the temple, Elder Walker said their response is often sublime. They comment that they have never seen a place more beautiful and peaceful.

One man wrote, “I joined the Church 25 years ago here in Missouri. I returned today with my family. This was the happiest day of my life.” He didn’t mention whether he had been active all those years or just come back that day, but his comment is typical of the joy expressed-and “for every comment or letter, there are ten more who felt the same way, but didn’t take time to write.”

A woman wrote, “I have been misled about the Mormons. I went through the temple today and your teachings and doctrines were clear. I had a wonderful experience. Thank you very much.”

From another, “There’s a lot of people who are saying things about the Church that are not true.”

One was baldly honest, “We are interested in joining, but we are nervous.”

Another was more definite, “We would love to be directed to the nearest church for Sunday services.” This was from someone who listed their religion as “none”.

“It was very wonderful, and I cannot wait to be a member of your Church.”

Still, said another, “As a non-Mormon, I didn’t feel pressured to join.”

One said, “The temple was the most amazing and wonderful thing I have ever seen. It was an incredible experience that I will remember the rest of my life.”

From a Jewish rabbi, “It was beautiful. It was not what I expected.”

From a Catholic mother: “The temple was gorgeous. My son converted and married a Mormon girl.We are extremely proud of them.”

Elder Walker said, “She may not have felt that way at first when her son converted.But what we see over and over again is that people come to the temple for an open house tour and they are changed-even Latter-day Saints. 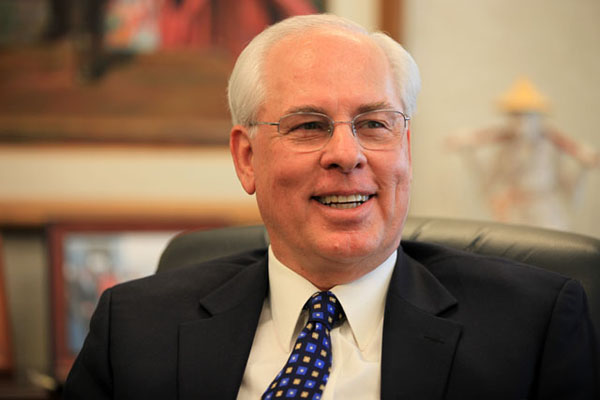 “Russ Tueller, president of the Draper Utah Temple said he received a call from a couple in Tooele who wanted to schedule their sealing in December. He asked them why they wanted to come to Draper when it was out of their temple district and farther from home and they answered, “We want to come to Draper because we were inactive members of the Church, and while we were at the open house we decided to become active again in the Church. We want to come back there because that is the experience that changed our lives.”

Another young man who came to the Draper Open House had decided that a mission was not for him. After his visit he called his bishop and said, “Now I want to go on a mission.”

One woman, who was a member of the Church in her mid-sixties, had taken an assignment to help clean the temple and brought her non-member husband along to help. He had been through the missionary discussions four or five times over the years, but had not chosen to join. In the middle of their vacuuming in one of the sealing rooms, she turned off her vacuum and told him she had something important to say. She invited him to join the Church and that night he said, “I want to be baptized.” Later they were able to be sealed in the same room where they have been vacuuming.

Elder Walker said, “Six sets of missionaries hadn’t been able to baptize him, but one trip to the temple had made it happen.”

One family drove from Montana to attend the Kansas City Temple open house, arriving one day, then touring the temple, then turning around to go home the next day. They wanted to imprint the temple on their children’s hearts.

Parents who aren’t members who have children who married in the temple find going through at an open house a remarkable experience.

“Every time we have an open house,” said Elder Walker, “we have people who receive the discussions, are baptized and then are able to come to the dedication as newly baptized members.”

What people understand at a temple open house said Elder Walker is that we are motivated by love. As Elder Walker told a group of ministers touring the temple, “We are trying to good. You are trying to do good. We don’t think people of faith should view each other as the enemy. The enemy is the Adversary. I’m so glad you came because it gives us a chance to show you some of the good that we are trying to do. What we are doing here is trying to bless people’s lives.”