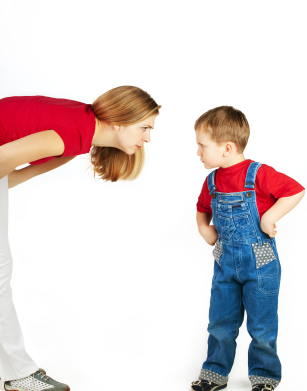 “How do you stop children from back talking?”

Children talking back, or sassing, to their parents seems to be a behavior many children experiment with. At different phases of development feelings of independence and intelligence emerge causing kids to talk back.

Ironically, parents spend lots of energy reinforcing the intelligence of their children, and teaching the children how to think for themselves. If we spend so many years moving our child toward self-governing thoughts and behaviors, why do we care so much about back talking children and back talking teenagers?

Respect is a vital part of learning self-government. Without an attitude of respect the child or teenager is doomed to fail in life.

Successes in life are built upon successful relationships. Any sales person can tell you this. If a person trusts you and feels appreciated and respected by you, then they will give you more trust, more money, more affection, or more opportunity.

Respect is a feeling of trust, acceptance, mercy and love. Families are built on feelings like these. When a parent feels respected she will happily serve a child more and be more willing to sacrifice for the happiness of the child.

Likewise, if a parent feels disrespect from the child, she will naturally become more controlling and negative toward the child.

Naturally, children offer similar positive and negative rewards to parents who treat them with disrespect. It is imperative that we understand there is a difference between good traditional strict parenting based on solid principles and calm communication, and disrespectful parenting manifested by feelings of disapproval, contention, superiority, and lack of understanding.

Respect is a feeling!

“The Blind Man And The Whelp”

A blind man was accustomed to distinguish different animals by touching them with his hands. The whelp of a wolf was brought him, with a request that he would feel it, and say what it was. He felt it and being in doubt said, “I do not quite know whether is is the cub of a fox, or the help of a wolf; but this I know full well, that it would not be safe to admit him into the sheepfold.

The Heart Of Respect

At the heart of all behavior problems such as kids talking back, there is a selfish heart. This heart can be felt,even if the child is trying to deny the problem. Just as the blind man could feel the danger of allowing the pup he held in his hands into a sheepfold, we also feel the selfish heart of the child talking back and know the home environment is not safe.

This issue with back talking is never about what is said, it is about what is felt. So, as a parent, the first thing to remember is that when a child is talking back, never acknowledge the words being said. The child is attempting to initiate a power struggle, which means you need to have enough self-government not to power struggle back. Hearts rarely change in the middle of an argument.

Before you say anything, make sure you check the way you feel. Focus your energy on letting your heart speak to their heart. Practice speaking with love, understanding, and truth.

How To Stop Back Talking

Stephen Covey says, “Seek to understand, then to be understood.” This principle, if understood in childhood, can create an assertive person who is likely to have many leadership positions and successful relationships.

Understanding parents always say, “yes” to such an inquiry.

Then the youth proceeds to say what he “understands” about what the other person is feeling. After he shows he respects the parent enough to understand where they are coming from, then he shares his perspective of a decision or situation, and his desire for a different decision to be made by the parent.

This straight forward, yet humble, approach to disagreeing unites parents and children instead of engaging them in relationship destroying power struggles like standard, selfish disagreements tend to do.

After a child sees that when he disagrees appropriately he often gets his way, he sees there is an attractive positive consequence for choosing to respect his parents; increased personal freedom. Getting your way is a kind of freedom which shows that the parent trusts the child.

When a child feels real trust he is more likely to repeat the respectful behavior which helped him earn that trust. Then the beginning of a respectful relationship is born.

It is important that parents remember the point of parenting is to build a long lasting respectful relationship. The point isn’t how many cookies a person has had, or what time they go to bed. So, if you take the time to teach your child to disagree appropriately, then make sure they see it often works. This positive consequence will encourage self-government. Which, after all, is what we work so hard at teaching our children each day of their lives.

There is no greater gift we can give our children than an environment where self-government is taught, because the greatest battle any of us fight in this life is the battle of choosing to follow the heart over following the body. People who learn to master themselves, can lead others to do the same; which is the essence of greatness in this world.

I don’t know about you, but that is what I want for my children.

This article seems helpful, however, I would like to add that the greatest gift that we can give our children is a love and a knowledge for God and His word.

I can see examples every day with my kids. Like whether to go in trolley or walk at supermarket, or which clothe sor shoes to wear. My 2 and a half year old can pronounce that phrase, but where language is developing we could have kids try a very basic version or you could even help them, like saying 'seems like you would like to disagree with mummy'? They say 'yes'. Same as when you're teaching them other words/ sentence and figuring out what they want. I like it and will be using this advice, thanks for writing this article.