If you’re looking for some great Christmas gift books for your nine-year-old or older, or perhaps one to read out loud to your family, I’ve compiled some outstanding reads that will make these a delight for the upcoming holiday season. 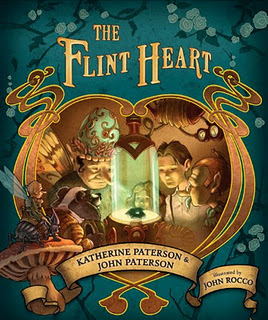 The Flint Heart, by Katherine and John Paterson, and magically painted by John Rocco and adapted from Eden Phillpott’s 1910 story, is an exciting foray into magic, fairies and adventure.  A very old relic that possesses power of control and greed is suddenly unearthed after being hidden deep in the ground for thousands of years.  A farmer, and loving family man, is completely changed for the worse when this talisman is found and so the adventures into the realm of magic begin. The husband/wife collaboration utilized the genius and humor of the original story while creating a tighter, more exciting, storyline. The colorful pictures sprinkled throughout are a perfect match.  This book would be a perfect bedtime story by reading a chapter every night.

Pie, by Sarah Weeks, takes place during the 1950’s and involves a mystery, indulgent town residents, a cat, and of course mouthwatering pies. When Alice’s pie-baker extraordinaire, Aunt Polly, dies the town that was made famous by her pies goes into a baking frenzy. The secret piecrust recipe was bestowed to Aunt Polly’s cat which Alice also inherited and which makes her the sole heir to the famous and highly sought-after recipe. The jealousy and onslaught of bad behavior by not only the town, but by Alice’s own mother (who felt betrayed by not getting the recipe for herself), heightens when the cat is kidnapped, or catnapped, and Alice and her friend must solve the dilemma before the town falls apart.  There is much humor throughout the book and most importantly, there are yummy pie recipes sprinkled throughout as well. 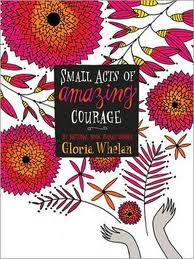 Small Acts of Amazing Courage, by one of my favorite historical fiction authors:  Gloria Whelan, is set in India post World War I and fifteen-year-old Rosy loves all aspects of the country from the vivid bright colors to the scents of jasmine and spices.  Her military father doesn’t want her to blend with the culture and especially with its people.  But she doesn’t comply as she is best friends with a daughter of one of the servants and enjoys patronizing the busy bazaar. Trouble finds her when she helps save a baby’s life by hiding him in a bedroom.  Many issues of segre-gation and treatment of the British and Indians are brought to light in this fascination look into the pre-independence of India.

The Dagger Quick, by Brian Eames, will have you on the edge of your seat or ship or wherever you happen to be while reading this terrific adventure. The year is 1678 and Kitto is living a life on land with a daily schedule of helping his family make ends meet even with his disability – a clubfoot. When his seafaring uncle, Capt. William Quick, visits life changes for Kitto. His father dies and his stepmother and brother are kidnapped by a ruthless pirate who is in search for a treasure that he believes Uncle Williams has knowledge of the whereabouts. This page-turner will hold you all the way to the end – just don’t get thrown overboard!

The Romeo and Juliet Code, by Phoebe Stone, is a look into disrupted British children as parents sent them to safety and away from the bombing in London during World War II.  Felicity has been sent to live with her father’s family while her parents go to Portugal on secret business.  She soon discovers that her Uncle and other relatives seem very mysterious and she’s about to set out to solve these mysteries, as well as discover why her parents are in Portugal. She also becomes friends with an eccentric cousin who’s recovering from polio. There’s much for one to learn about the hardships of the war and the value of family in this well written story. 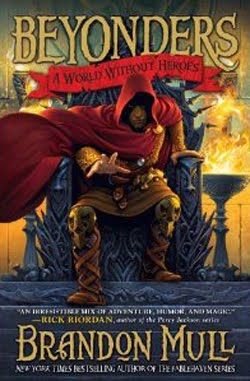 Beyonders:  A World Without Heroes, by Brandon Mull, has thirteen-year-old Jason, along with his newly found friend, Rachel, attempting to return to his home in Colorado as he’s been trans-ported to the magical world of Lyrian. This page-turner is Mull’s new series that includes amazing twists and turns all along the way.  The second book is planned to be published in March.

Kat, Incorrigible, by Stephanie Burgis, is a story about twelve-year-old Kat who lives in early nineteenth century England. She is attempting to help her sisters as she recently has discovered she has magical abilities to help thwart her stepmother’s wishes to marry them off to the highest bidder. This story showcases a girl with spirit, intelligence and courage to help her older sisters achieve their destiny. This is the first book in a planned series. 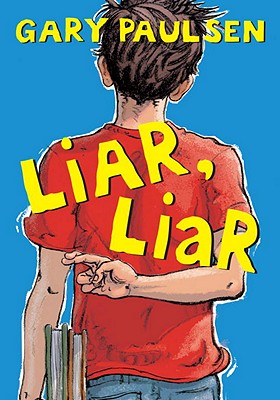 Here are two new books by favorite and award-winning author, Gary Paulsen. Liar, Liar invokes a path of fibs and tales as fourteen-year-old Kevin finds himself deep in a web of lies that eventually traps him. He lies to get out of schoolwork and at home. But his little four-year-old brother finally brings him back to the truth. Flat Broke continues the story about Kevin only this time he’s using his creative ingenuity to make money. But the big problem here is he doesn’t think about the people he steps on or the illegal practices he uses to make the buck. Eventually, his entrepreneurial world cracks and his learning curve takes a giant step upwards. The chapter headings are a tongue-in-cheek look at how he believes he’s achieving his ultimate goal.

The Accidental Hero, by Matt Myklusch, is an adventure that will whisk you away from the onset, and carry you to far off lands. Jack lives in an orphanage but that soon changes when a robot from his favorite comic book attempts to destroy him and another rescues him.  He is transported to a hidden island that he soon discovers is his real world.  There is much for Jack to discover and make right in this new life and his perseverance and special powers pay off. This is especially good for boys and reluctant readers.