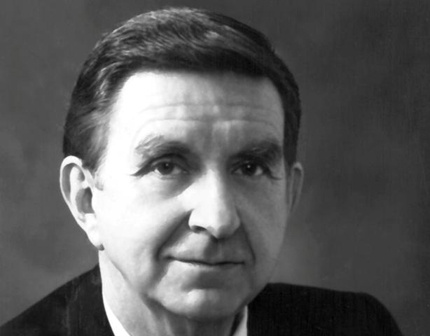 Last week, on Saturday morning, a Salt Lake City chapel overflowed with individuals who came to remember a great man – a man “of strong faith and a firm mind in every form of godliness” (Moroni 7: 30). Elder Marion D. Hanks, emeritus general authority of the LDS Church, passed away on August 5th at age 89.

His granddaughter, Kara, my dearest and closest friend, played the piano. Her sisters played the cello, flute and oboe. His daughter Nancy, whom I love like a mother, spoke. The prophet and two apostles spoke. And to the splitting of my soul, I was not there. So I write today. To remember a man whose heart and mind changed my life.

Elder Hanks’ list of accomplishments is long. His ability to teach from the scriptures was unparalleled. He could quote large sections of poetry from memory. Some called him the poet-soul of the General Authorities. He sought out those who had less, were disaffected, or felt unloved. He was a passionate humanitarian. And as one of the youngest General Authorities ever called to service, he spent four decades traveling the world with his wife Maxine, standing for Jesus Christ.

This man loved God. He knew God. And he knew how to love like God.

When Kara and I were nineteen, we flew to the Hawaiian Islands, to stay with Grandma and Grandpa Hanks. Their home, in Hana, Maui, sits atop a green-hilled pasture of horses. Large black rocks trim the ocean below and waterfalls grace the mountain above. I dare say it is heaven.

One evening, after Maxine tried to teach us how to hula, Elder Hanks sat down with us at the kitchen table. I can still see him in his green aloha shirt and khaki pants. Having learned that Kara and I had been accepted to BYU’s study abroad program in Jerusalem, he wanted to teach us about covenants, lineage, dispersions and gatherings – things he said we ought to know. We opened the scriptures together and to be truthful, I found myself a little lost amid all the names, tribes, and promises.

But then he began to talk of Christ.

I leaned forward in my chair, bent my ear closer; I was with him now. He quoted John 3: 16-17 and told us we needed to memorize it. Every word. Not just verse 16 about God loving the world, but verse 17 as well. “For God sent not his son into the world to condemn the word, but that the world through Him might be saved.” This, he said, was the essence of the gospel. So I memorized it right then, as I listened to him repeat the words. Sure and calm. Like the sound of waves washing through an open window on the night breeze.

The next evening Kara and I walked along the shoreline. A residue of sunset hung over the sea’s horizon. Gray clouds clung to the air around us. I looked up the hill to get my bearings and found the Hanks’ house glowing like a beacon. Before bed that night I wrote in my journal, “This truly is a house of light.”

Elder Hanks gave me one other pearl of advice on that trip. I wrote about it here. He said, “Question everything. But stay on the path.” Those words changed how I studied the gospel, viewed truth, and understood God.

When my husband and I were married, Elder Hanks performed the sealing. He taught us the power of keeping covenants humbly. He quoted John 3:16, and, of course, 17. Then he testified of Christ. His testimony, so pristine and tangible, made me weep as I held my soon-to-be husband’s hand and listened to him express confidence in our decision to start a life together.

A few years later, during another trip to Hana, I was reading Margaret Blair Young and Darius Gray’s trilogy about Blacks in the LDS Church. I was marking the text, reading it carefully, in preparation to write a review of their final book, The Last Mile of the Way. To my surprise, while sitting in a wicker chair beneath Elder Hanks’ bookshelves, I began reading about him. His name kept popping up as a bold and undeterred force in fighting for the cause of blacks, even in his early days as a young missionary to the Northern States. I was discovering things I’d never known about Grandpa Hanks. (Read Margaret Young’s touching Memoriam of Elder Hanks here.)

I’ve read most of the comments to recent articles written about Elder Hanks. They represent a diverse collection of voices – students, friends, church members, less active members, patrons of other faiths. But it is this statement by BYU professor Warner Woodworth, that I love most. “The world has Albert Schweitzer. The LDS Church has Elder Hanks.”

Last Thursday Kara stood in our backyard while our children splashed in the wading pool. She told me of her last exchange with her grandfather – how she held his hand and stroked it gently, watched him breathe. Days earlier, he had slipped into a coma, so she didn’t expect much of a response as she pressed her face next to his to whisper she loved him – to say goodbye. But when she did, he pushed his forehead purposefully against hers.

Kara’s father said, “It’s hard to imagine a world without Grandpa in it.”

And it is. I suspect, however, that the world will continue to hold onto Elder Hanks. Pass pieces of him down to newer generations by telling his stories, repeating his words, and emulating his compassion. Too many were changed by his faith, by his ability to see light where none seemed to exist, to forget a man like this.

Catherine Keddington Arveseth is a full-time mother of five, including two sets of twins. She blogs @ wildnprecious.com, writes for Power of Moms, and is on the prose editorial board for Segullah.