Missionary Moment: Meeting Raul was an Answer to Prayer

Mark Albright is the president of the Washington DC South mission and shares these missionary stories with Meridian Magazine.  This letter comes from Elder Chris King. 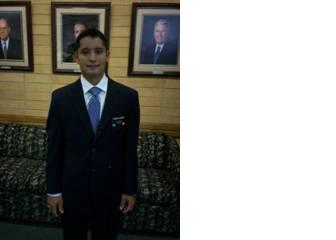 Elder Raul Villasenor at the MTC

I was training Elder Porter, and he had never planned a full day by himself before, so I decided that it would be effective to see how he was picking up on the way that we plan. He, like many new missionaries, planned a day full of tracting, with his backup plans located a long driving distance away from the original area.  I wanted this to be his day, so I suggested some minor changes, but ultimately let him make the final decision.  He decided not to change a thing.

The next morning we started with a good work out, companionship studies and then at about 10:30 a.m., right after our Spanish language studies, we went out to tract. We first went to an area full of town houses, typically a great place to find, yet after about 30 minutes we both felt uneasy about being there, like we should probably be somewhere else. We decided to go and tract in the area that he had chosen for our back-up plan.

On the way to the new area, we were driving along when we both felt a strong prompting to stop the car. We followed the prompting, parked and got out our area book to look for former investigators who might live in the vicinity.   We found the name of a person named Raul and looked at his address.  Amazingly, we were parked right in front of  Raul’s house!  I had heard of Raul because he was a previous investigator who had been dropped months before I arrived in Manassas, Virginia.  We decided to check and see if he was home.  We felt that this must be the reason we had been brought to this neighborhood.

We knocked on the door, and for the first time ever we met Raul, 21 years old.   He invited us in and quietly said, “Thank you Father!”  In response to our questioning looks, he explained that he had been praying that very morning for the Lord to send him angels to teach him what he should do with his life.   When Raul saw us at his front door, he knew immediately that we had been sent in answer to his prayers.  We proceeded to share a short lesson about the Book of Mormon and at the end of it, we told Raul that if he prayed right there and then to know if the Book of Mormon was true, he would receive an answer from God, and that he then would know that he would need to be baptized. He agreed and accepted our invitation.

We all knelt down in his living room and then Raul offered the most sincere prayer that I had ever heard. He first thanked the Lord for sending His angel missionaries to teach him in direct answer to his prayers offered earlier that day. He then proceeded to ask God if in fact the Book of Mormon was true, and if he would need to be baptized as a result. The answer came quickly. The Holy Ghost filled the room and all of our hearts.  Raul began to cry, and he knew that he would soon be baptized a member of The Church of Jesus Christ of Latter-Day Saints.

He was baptized two weeks later, and then went on a mission a year later to the Idaho Pocatello Mission, where he is currently serving.  He still refers to Elder Porter and me as his angels.  I love Raul.  His conversion not only blessed himself but every other person who has come into contact with him, especially me.  I have attached  a photo of  Elder Raul Villasenor that he sent to me from the MTC in Provo, Utah.