Missionary Moment: The Miracle of the Blue Book

Mark Albright, the president of the Washington DC South Mission, shares this story in a letter from his father, Vern Albright.

I would like to share the conversion story of a friend of mine named Glenn Davis from McLean, Virginia.  I first met Glenn in Las Vegas some 42 years ago.  He came to my office and asked me to help him with a problem.  One day Glenn said to me, “Vern, you have something I don’t have and I want to know what it is!”  I quickly replied to him, “Oh, It’s the Blue Book,” and I handed him a copy of the Book of Mormon.  He assured me that he would read it soon.  He started reading the book and shortly thereafter returned home to the east coast. I don’t think I have ever used that missionary approach before or since, but it just came into my mind at the time.

The next  time I spoke to Glenn he said he had finished reading the Book of Mormon and that he knew it was true.  He explained that just two days after he had returned home, two missionaries knocked on his door.  He told them he had already read their book and that he believed it was true and had been waiting for them to visit him.  He was baptized soon after that.  It is a tender mercy that the missionaries would find him so quickly without any referral from me.

Glenn had a short beard at that time and I took him to my teenage Sunday school class and introduced him as a Jewish Rabbi. He vigorously questioned the class on their lack of knowledge of the scriptures in the Book of Mormon and chided them that he knew more about the Book of Mormon than they did.  He finally broke down and told them he was a convert to the church. The class was delighted to hear that.

The next time I saw Glenn was in Florida 20 years ago.  He told me that at least 21 people had joined the church because of his conversion.  When I saw him again in McLean during 2010, I asked him how many people had now joined the church as a result of his conversion and he said he had no idea because his son and five grandsons had served on missions and had baptized many people. After dinner at his home Glenn told me that he and his wife Carolyn had now served two full-time missions, and he has served in a bishopric and as an Executive Secretary for four bishops, two Stake Presidents and two Mission Presidents, where he is now serving!  He and his wife have also worked in the temple for ten yrs and have had sister missionaries live in their home for several years.

I’d like to read you a few lines from a letter I just received from Glenn:

“Carolyn and I recently discussed what our lives would be like if we were not members of the church. We determined our whole life had been influenced by the church and directed by the ‘Spirit’. .. My first real experience with feeling the Spirit was when I was prompted to ask you ‘What do you have that I don’t?’  When you gave me that ‘Blue Book’ I thought how can a book be what makes a person so different?    I know the answer now.   We try to live our lives each day as the Spirit would have us live.  We continue to read the Book of Mormon and try to live by its precepts.” 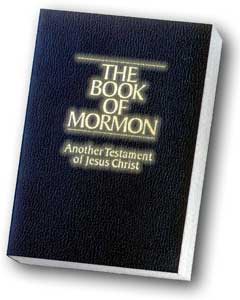 Editors Note:  Vern Albright is currently serving as the Patriarch in the Las Vegas Nevada Stake. He previously presided over the Florida Tampa Mission of the Church.  Glenn Davis was recently called as the Executive Secretary in the Washington DC South Mission.