Tricks and treats are most abundant in these chapter books for ages nine and older, making it my last installment for Halloween books for 2010.

Ghoul Strike!, by Andrew Newbound, finds twelve-year-old Alannah in the midst of searching for her parents who went missing more than years ago while searching for ghosts. Now it seems that Alannah has similar psychic powers passed on to her because she can see these ghostly encounters. She is about to go head-first into a discovery that will almost throw her off course. The humor and banter between her and the other characters throughout this book make this mystery lighter and funny.

Among the Ghosts, by Amber Benson with delightful illustrations sprinkled throughout by Sina Grace, embroils Noleen in a conflict unknown to anyone else while she is staying at an old boarding school. She befriends ghosts in an area near a burned-out dormitory and soon discovers that these ghosts are unwillingly disappearing.  Noleen must find out why in order to put a stop to it. 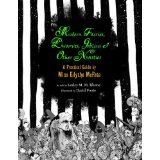 Modern Fairies, Dwarves, Goblins & Other Nasties: A Practical Guide by Miss Edythe McFate, by Lesley M. M. Blume, and wonderful pen and ink drawings by David Foote, is most likely going to be one of my favorite books of the year!  Blume has captured the magical essence of these smallish sprites as she delves deep into their many adventures and mischievous behaviors. There are prequel warnings and explanations prior to each tale, with follow-up notes and further help in order to better understand their actions or reactions.

The Wish Stealers, by Tracy Triva, involves sixth-grader Griffin, the moment she accepts a box of what she thinks are lucky pennies given to her by a mysterious old woman. She is now officially a “wish stealer” because these pennies were stolen from a wishing fountain and bad wishes are going to come from them. Griffin sets out to change this predicament and break the curse.

Fablehaven: Keys to the Demon Prison, by Brandon Mull, is the last installment of the popular Fablehaven series and it won’t disappoint you.  It’s every bit as exciting and nailbiting as the prior books. The same brother and sister duo, Seth and Kendra, must travel a great distance where they are in search of the keys to the demon prison before the evil Sphinx recovers the five artifacts.

The Heart of Glass, by Vivian French, is the third installment to the “Five Kingdoms” series following The Bag of Bones. French continues the story of Gracie Gillypott and Prince Marcus, but this day they are going to watch dwarves. Princess Marigold has different ideas for Prince Marcus because she has her heart set on him. Throw in some trolls, a goblin and some noisy bats along with a powerful heart of glass and you’ve got a hilarious and thrilling adventure!

The Search for Wondla, by Tony DiTerlizzi, is the beginning of a new series that will thrill the reader. The author of the Spiderwick series has created a new story set in the future about twelve-year-old Eva Nine, who has been raised by a robot. Now, she is forced for the first time to go aboveground, where she has never been before. She has never seen another human but believes there must be more like her.  Her most treasured item is a piece of cardboard with a young girl, an adult, a robot, and the words “Wondla” on it.

She is about to encounter many unusual friends and foes as she treks across this new horizon. The author has masterly illustrated two toned pictures as well as incorporated some new elements in this book.  With the use of a webcam, there are several augmented reality pictures that add to Eva’s dimension.

Oracles of Delphi Keep:  The Curse of Deadman’s Forest, by Victoria Laurie, is the second in this series — and suffice it to say that you will love this series. The first book begins along the coast of England where a castle houses orphans. When a brother and sister find a treasure box, their exciting adventure unfolds with monsters, mythical creatures and even a portal to another country.  This second book continues the sibling’s quests and is compared to the Chronicles of Narnia.

Enchanted Glass, by Diana Wynne Jones, begins when Andrew inherits his grandfather’s large house and property. The property houses ghosts and even a giant, but it’s about to receive an orphan who has problems of his own with the supernatural. Andrew takes this young boy in and the ghostly presence heightens immediately.