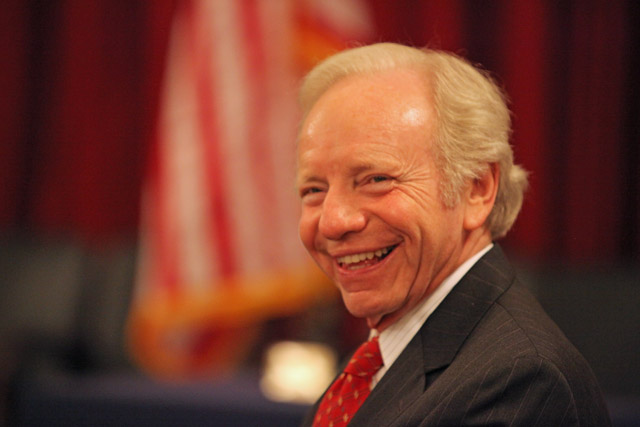 The J. Reuben Clark Law Society and BYU’s Center for Law and Religious Studies have created a new award to be given to someone who has made a significant accomplishment in promoting and protecting religious freedom.  This year at a dinner on Capitol Hill, the award was presented to Senator Joe Lieberman for his key role in creating the International Religious Freedom Act (IFRA).

IFRA created the United States Commission on International Religious Freedom, an independent, bi-partisan commission, which reviews the facts and circumstances of violations of religious freedom internationally and creates a yearly report that forms the basis of policy recommendations to the President, Secretary of State and Congress.

In other words, those nations that consistently violate religious freedom are impacted in their relationship with the United States.  It is a guide to our foreign policy and a way for the U.S. to influence nations of the world to respect and regard religious liberty.

Cole Durham, who heads the BYU Center said, “I’ve been out in the field and often the fact that there’s someone in the U.S. Embassy making a report on religion, empowers people to alert officials what their problems are.”

In presenting the award to Sen. Lieberman, J. Reuben Clark Law School Dean James Rasband said, “No government has the right to tell people how to worship and certainly doesn’t have a right to discriminate against them. The promotion of religious freedom now has become a core part of our foreign policy.”

In accepting the award, Sen. Lieberman, said, “I think threats to religious freedom anywhere in the world are common threats to humanity everywhere.”

He said that a value that enshrines religious freedom has been passed on from generation to generation across the sweep of American history, and that journey toward the more perfect realization of those values has no final destination point.

“We uniquely as a nation have been defined not by our geographical boundaries but by our purposes as a nation and by our laws which embrace and express those values. The law is our way we express our aspirations for ourselves.

Sen. Lieberman said, “Religious freedom today remains under threat in too many parts of the world…Experts estimate as many as half the world’s people live in regimes that limit or suppress basic religious freedoms.”

He said, “American policy is at its best when it is true to our national values…Do not indulge yourselves in the supposition that America will be a good society without religion.  In a society of law, not rulers, there is a need for other sources of good behaviour, of accountability, of responsibility—and there is none better than religion.”

He said he is proud of the work that the commission has done. “Sunlight is the best disinfectant for what’s wrong in government.”

Sen. Lieberman, who is Jewish said, “As you know, the sting of religious discrimination and bigotry has too often been directed at the LDS Church and its followers.  Unfortunately, we found out through Gov. Romney’s candidacy that the LDS church is still the target of misunderstandings and bigotry.  That seems awfully familiar to me.”

He said, “You are different and you are such high achievers and you are so successful. There’s a sort of envy that motivates the bigotry.  I hope together that over time, together, we can knock it down.

Senator Lieberman was the first Jewish American to be on the Presidential ticket, running for vice-president in the year 2000.  He said, “When someone is allowed to break a barrier, the doors of opportunity are opened wider for everybody.”

“I promise to stand with you where there’s an opportunity to speak out against the misunderstanding that Latter-day Saints face.”

“We have succeeded in expanding the franchising of freedoms not just in our own country, but abroad.  Advancing those freedoms has been our national purpose and remains our national destiny and can best be achieved through law.”