My Dad and Mighty Oak Trees

Whenever I asked my mother to tell me her life’s story, she always started in the same place, giving details that became for me as familiar as the drumbeat of my own pulse. It was as if her real life began, burst into meaning, newly focused, fresh light stirred, when, as a college girl, stuck home for a year for lack of tuition during the Depression, she walked her younger brother over to school in their small Utah town, to register him for the new year.

My father was the tall, dark-haired, new teacher in town, a handsome presence that dominated the day, and accidentally injured her dignity by assuming she was another high school student. She stiffened, went straight as a tree to look taller, corrected his false idea, and he, relieved, not to be so attracted to a high-schooler, promptly asked her out on a date.

She wrote in her journal, “I have met a very wonderful man, not a boy, but a man – one who would face life unafraid and expect no more than he gave… Joel makes me want to be so much better.” (emphasis hers).

He had that affect on all of us, Mom. My father was a presence, someone to be reckoned with, impossible to ignore, a standard of integrity, absolutely to be counted on. He was a large 6’4″, shoulders broad enough to carry the weight of all our cares, with a resonant, deep solo voice, that could hit notes so low on the bass clef no one could match him. It was a sonorous voice that resonated through my life that I learned to trust absolutely. 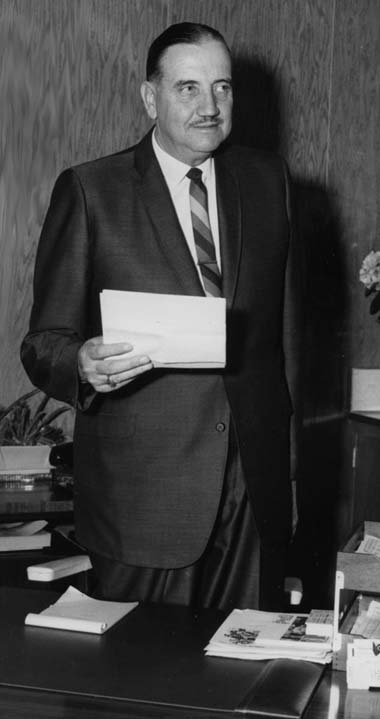 I was born during a winter in Utah that went down both in record and lore as the worst ever, blizzards flattening the bushes and stealing your breath away, snow so thick and hard and unrelenting, it closed the road next to our home for several days. My brothers, still young and delivering newspapers on wobbly bikes, wanted to quit their job as paper boys.

My father’s answer was simple, a portrait of him in a brushstroke. “You can quit in the summer when it’s easy,” he said, “but you can’t quit in the winter when it storms.” When the riding is hard and the wind is fierce, that’s when you keep on, reach down deep into yourself and find your strength. You must be a pillar, a rock, unearth your hidden resources, mine your gold.

He didn’t ask more than he was. In fact, when those winds scoured too hard, I know it was my father, who after a long day at school, took those boys, who weren’t allowed to quit, out to deliver papers.

I don’t remember his saying anything about winter, summer and polished effort to me, but I knew it from him without words. His sermon was himself, something strong and unfailing in his essence.

Like my mother before me, I wanted to stand up tall like a tree around him, be all that he believed me to be. His very being translated into my life as supreme safety. He was a harbor of peace in a storm-tossed, sometimes riven world. When that snow of my birth year had melted into spring, my mother took a picture of Dad holding me on my blessing day, scooped up and protected by his large hands, my bonnet blooming and ruffly, like the cherry tree behind it. He looked proud; I looked secure.

Like most children, I didn’t fathom the price my father paid to weld our family to this sense of safety or how tired he might have been when he wrapped me in his arms and held me in his largesse for story time. I sometimes saw him poring over the bills at his desk to support our family on an educator’s salary, and I knew he kept special funds that he added money to each month in case of emergencies.

Two dollars a month toward a new furnace. Someday ours will go out. When it did, he would be ready. If anything happened, with his perfect self-discipline, he was ready.

By the time I was in high school, he was my principal, and his bass voice was the one I heard on the intercom each morning, welcoming students to school and giving instructions for the day, a voice from the ground of my being. He was a presence there, too, a symbol of strength.

In the large auditorium, we students would be chatting noisily, horsing around, until he came in.

Other faculty members might have already arrived, trying to shush the noise, ready us for the assembly, to little avail, but all he had to do was enter the auditorium from the back, without a word, and a hush began stealing across the students, starting in the rear where he was and then creeping forward with growing strength as the students realized he was there. The crowd was silenced without a word from him.

I don’t know how he did that. Some would say the students were afraid of him, for he certainly respected the school standards and expected others to as well – but it was something more.

When my parents were first married, they got a flat tire on a stretch of road in barren wilderness. My father got out to change the flat tire, and my mother, having seen her own father, when changing a flat tire, become heated, his language sauced with pepper, thought that must be how flat tires are changed. When my father calmly got on his back in the mud to change the tire without a word, she asked why he wasn’t mad and cursing? He asked, with a wry smile, “Would it help?”

Whatever that something more was that helped him silence a student body; it was the power of his spirit, not anger. I yearned for some shred of that in me later when I taught in Chicago’s inner city schools, and the children were wildly out of control. Oh, I wished, if my father could only walk into the room right now, so order could again prevail. “Let there be peace, and there was.” I longed for him.

I hugged my dad when I saw him in the halls at high school, called out his name, with a wave, from far down the hall, “Hello, Dad.” In school I wanted to do well, not for fear of his disapproval. I never felt anger or disapproval from him, not a frown that made me wince. I felt, instead, such profound respect for both of my parents, that I hoped to be a credit to them.

That’s why I did what anyone else would think was ridiculous, unthinkable. I was a senior, and it was two days before the end of school, that lazy, hi-jinks period when both teachers and students have given up for the year. My friends in pep club had decided to sluff first and second period and go out to breakfast. Could I come along?

How could the principal’s daughter sluff? I did the only thing I could think to do. I went to my safe harbor, my father, the one who always treated me gently, the principal of the school, and asked.

I could see through the glass window into his office that he was not alone, but having a meeting with the vice-principal and all the school counselors when I came to ask. He hesitated for a minute, but they all chimed in, “Let her sluff, Joel. Let her go.” I did. The principal had told the student to sluff with his approval.

When I still lived home and was studying late, I sometimes slipped into his bedroom where he stored a wooden box, often full of candy bars. I wrote an IOU on a slip of paper and took a candy bar to ease the studying hours – and then a few days later did the same – until his box was free of candy bars, but filled with my wrinkled IOU slips. Then the box would be mysteriously refilled, and the dance continued. It took me several years to figure out that he never ate the candy bars and never intended to. He had put them there for me all along, secretly smiling at every IOU. So many IOUs to my father that I could never repay.

That voice over the morning loudspeaker was a tangible absence when I went to college, but not his influence, which echoed and sang its silver song into every part of me, and straightened my backbone. When it was time for me to cast my first ballot in a national election, I was at the university, living on campus, and by that time, influenced by my professors, I had defected from my father’s political party of choice, a short-lived defection, but at least a heartfelt one at the time.

It was an hour round trip to come to college to get me, drive me to the polls, and then an hour round-trip back. Undaunted by what appeared to be a useless task, where our votes would just cancel each other out, my father drove the icy November miles to pick me up so I could cast my first vote as a citizen. He knew our net-net effort would make zero difference in the election, a wash, but not in my soul or sense of responsibility and public spirit. He didn’t say, but I knew, he was far more interested in raising a daughter than supporting a candidate.

“When you need help, is when you need it – not some other time,” my Dad used to say. He said it when he mailed us money when I was newly married so we could have a Thanksgiving turkey. He said it when he sent a thousand dollars to help cover the birth of a baby. He said it countless times when he stopped to help someone on the road. Then one night, half-asleep, I lay nursing a baby, when the phone rang and my mother called to say he was gone. Gone too soon, his heart stopped, just like that.

It was like a mighty oak had fallen in my world. It was the ancient oak, with hundred-foot long, curving limbs on which the whole family could climb and be safely supported, with other limbs that reached high to swing in, laugh freely because you were held so lightly, but so well. It was the oak that sheltered me from the glaring heat of mid-day that scorches and the storms that bite.

What do you do when the yard is barren, where the oak once stood?

I found I was still sheltered and protected because my father had shown me, demonstrated with his life, that there are virtues worth raising your sights for, ideals that demand your excellence, that doing what’s right should never be sacrificed to doing what’s easy. My father’s virtues, his sermons of the soul, had spoken to me with such power that they had also turned me to God. That God should ask something of me, mine my soul for gold, and protect me from the storm seemed somehow familiar. My father pointed me where I needed to go.

A middle school in the district, where my father eventually headed all the secondary education, was named in his honor posthumously, the Joel P. Jensen Middle School. Humble by nature, he would have never sought such an honor, but I know he would be pleased to see how responsible and tender my brothers are, how charitable my sister is.

I know he would delight in my grandson who is his namesake, and as for me, I try never to sluff without at least getting his permission.