Editor’s Note:  Thanks to our Meridian readers who wrote quickly alerting us to the fire and to Rich Alton who sent us a description of his experience and to Bruce T. Forbes who sent us a poem.

Not since an arson set fire to the Nauvoo Temple in 1848 has a temple of The Church of Jesus Christ of Latter-day Saints been ravaged and decimated by fire.  We have the sense, in fact, that our temples our protected from such disaster, but Wednesday evening 9 July 2003 at about 7:00 the Apia Samoa Temple burst into flames much to the horror of those who looked on. 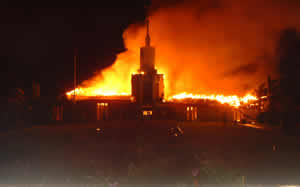 The temple had been closed since early spring for renovation and an addition of 2065 square feet which would include a new baptistery, new lockers, dressing rooms, clothing issue and meeting space.  Because of the renovation, the temple records had been removed and were not destroyed in the fire. 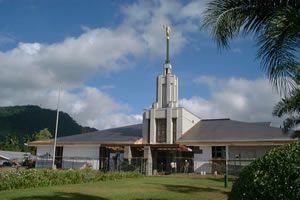 Wednesday evening two workers heard a “bang and then a hissing noise,” according to Rick Chadderton, the Church service center manager.  At first while waiting for the fire engines, workers were trying to stop the blaze close at hand with fire extinguishers, and then they realized the main part of the conflagration was much bigger than it appeared.. 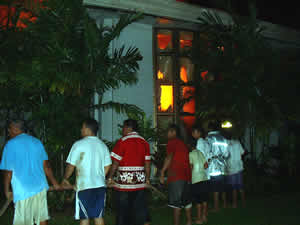 Elder Jerry King, Pacific Islands Public Affairs Director said the fire trucks arrived by 7:35 and an hour later the international airport sent their more powerful truck and equipment used to fight airplane fires. “They worked hard and were assisted by some 100 volunteers, handling hoses and generally helping, but it was hopeless.” From the time the fire broke out in the southwest corner of the temple until it burst through the roof was a very short time, and it quickly became obvious that it was not going to be contained.” 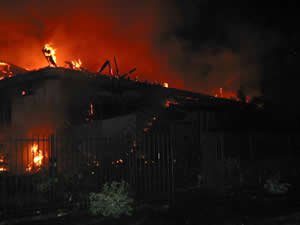 As the temple burned, many gathered around, some crying.  The temple is the most beautiful building on the island and a familiar site in this city of 35,000. Elder King said, “The Saints were devastated.  Community members were decimated by the sight.  They were lined up against the temple gates down by the road just mournfully looking at the disaster taking place.” 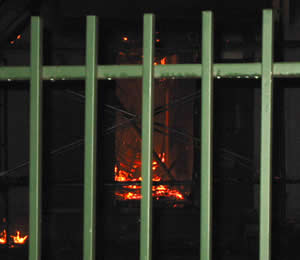 The temple itself is on a campus that has a church service center as well as an LDS chapel, temple housing units, and a mission home close by.  For a time, it was feared that burning embers from the temple would catch the other buildings on fire, but a brief sprinkle seemed to thwart the spread of the blaze. 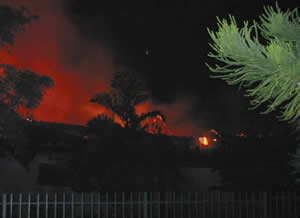 Rich Alton, a BYU graduate who is working in Samoa on a micro-credit program and lives less than a mile from the temple wrote, ” Last night at about 8pm, my roommate noticed a bright orange glow on the horizon that appeared to be coming from the Church compound that houses the temple, mission home, church schools, and a chapel.  We jumped in a car and headed down to the site.  As we drew near, we both prayed that the fire wouldn’t actually be coming from the temple, but we soon saw our worst fear realized.  By the time we arrived at the grounds, the blaze was just reaching its apex.  For a while, we hoped the Lord was sending a miracle, as rain began to fall, but it had little effect on the flames that began to engulf the roof of the temple.  Slowly the roof collapsed piece by piece, each time accompanied by a moan of regret from the bystanders. 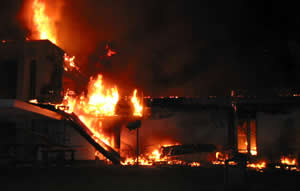 “My roommate and I walked around the grounds, talking to different friends, church officials, and employees of Westland construction, trying to piece together what happened.  Naturally, the contractors were filled with shock and horror as the temple burned on their watch. 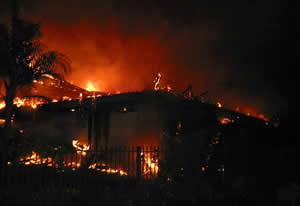 “Despite the best efforts [of the fire department], by 10pm the flames had consumed everything that was not steel or concrete, and the firemen were at work dousing the remainder of the temple.” 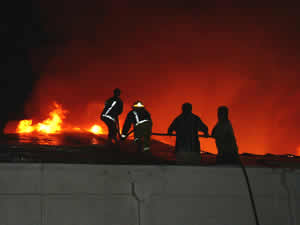 While the fire burned, Elder King, circled the temple taking pictures, some of which accompany this article.  For him it was a sad irony as he and his wife had been in a meeting that very day on the open house and rededication of the temple. 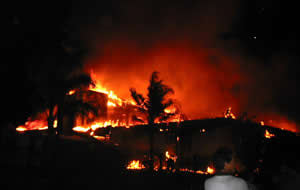 “The Church treats rededications exactly as they do dedications of temple,” he notes.  “We, along with others, had worked many nights until 11 or 12, trying to put together what Heavenly Father would have this event to be. We were excited about what was going to happen.” 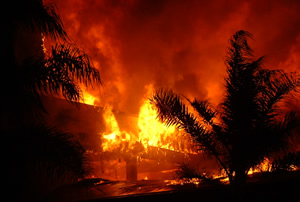 Others had worked long hours, too. Elder King said, “The day before we had toured the temple with the contractor and engineer.  They were so proud of what they had done there.  They just had their heart in the temple.” 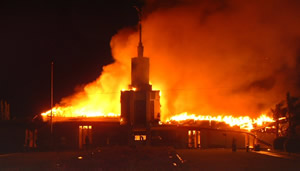 As he walked around the temple, snapping about 140 pictures, Elder King kept asking to make sure no one was injured, his first concern.  Assured, that everyone was safe, the personal devastation remained. “I wanted to cry.  I wanted to do something about it.  I have never in my life felt so helpless about something so important to me.” 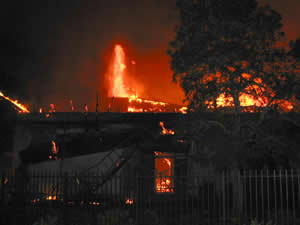 Rich Alton noted, “The angel Moroni was an important symbol throughout the night.  As the fire progressed, the flames slowly inched their way up the tower that supported Moroni. The members’ greatest hope, when it became clear there would be nothing left of the temple, was that the angel Moroni would stand tall at the end of the night.” 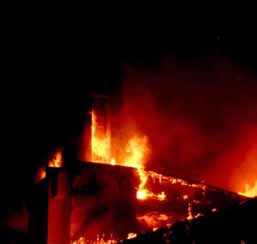 Elder King said that the members were pleading for the statue of Moroni, “Don’t let him leave.” 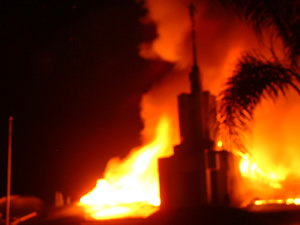 Rich Alton noted, “The flames licked the statue repeatedly, and burned off all the outer covering of the steel framework that held it up, but Moroni did not fall!  As I drove to work this morning, and lamented the sight of a blackened and empty temple, my heart was warmed at still seeing Moroni atop the temple as a symbol of strength and hope in the restoration of the gospel and the restoration of the temple. 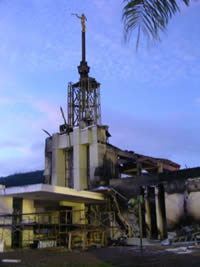 “The whole evening took on a surreal quality,” he continued, “as no one ever expected to see the Apia temple, or any temple for that matter, destroyed by fire.  There really were not any words to describe the range of emotion that people felt. 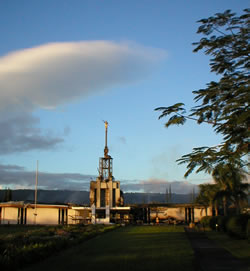 ” I spoke with a member of a local bishopric who came to the temple site after his bishopric meetings.  He expressed the hope that perhaps the Saints would appreciate the temple more through this experience.

Some immediately began thinking of the great rebuilding work to be done, how and when it would begin.  Others, simply buried their faces in tears.” 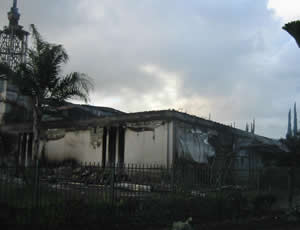 Shortly, the Church will have a team arrive in Samoa to investigate the cause of the temple fire.  In the meantime, Meridian reader Bruce T. Forbes offers this poem of  comfort:

“Some Things Do Not Burn”
by Bruce T. Forbes, 10 July, 2003 … upon hearing of the destruction of the Apia Samoa Temple the day before
copyright 2003

I have never been there,
But I wept at the news –
For I knew it was a monument
To the years and decades of
Hope and the Faith
Of a people,
A Nation,
And to the many
Islands surrounding it.

If I felt the loss as strongly as I did –
Well, how must they feel?
Is there anyone there
To wipe their tears
And mourn with them?
Know that if I could, I would!

I hope they are feeling
That their hopes and faith
Were not in vain,
For some things cannot be
Burned to the ground:
For twenty years
God’s children have gone forth
From that sacred place,
Endowed with Power from on High –
And they are still endowed;
Families have gathered and were organized
By a Father’s sealing power –
And they are still organized
With bonds the flames will never touch;
Hearts have been turned in that place
As generations have reached
Through the veil
And helped one another –
And that help has not been rescinded
Just because of the loss of a building.

Even as the golden angel
Still stands above the ruins,
So the power of the Saints
Who have gathered to that place
Is still firmly in place.

Now, with greater Faith
And greater Hope,
Another temple will rise. 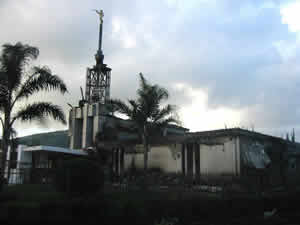 It's possible to understand the pain of people seing this temple leveled by fire. Mormon communicants were very sad. Perhaps today a new temple is completed. I'm a LDS Church member but a mainline protestant, but I find sad for this disaster.