“A Celebration of Family History” Delights Thousands of Genealogy Enthusiasts

The event, entitled “A Celebration of Family History,” was organized by FamilySearch , a division of The Church of Jesus Christ of Latter-day Saints, and served as an inspirational compliment to the lectures, presentations and other learning and networking opportunities offered at the conference. 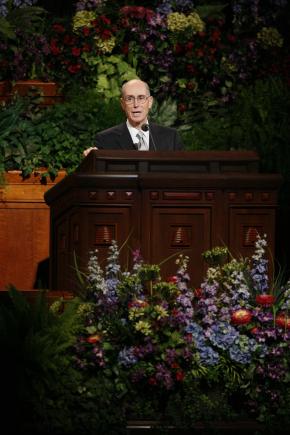 President Henry B. Eyring, first counselor in the First Presidency, spoke to those assembled. In his remarks he acknowledged the unique support family history researchers offer one another. “You have built and preserved a community where the mentor that helps those less skilled is revered,” President Eyring said. “It is rare in history for such a community to emerge. It is rarer still for such a community to sustain itself.”

“There had never been anything like this before – a production-quality event celebrating family history with thousands of enthusiasts in attendance,” said Jay Verkler, president and CEO of FamilySearch. “The personal family history stories depicted and the musical numbers by the Mormon Tabernacle Choir were absolutely amazing, and we are so grateful that President Eyring and David McCullough were able to join us and share their remarks.”

Throughout the program, video segments projected on giant screens depicted the personal journeys and dramatic discoveries of a handful of individuals in pursuit of their family history.

“In telling these stories, we want to show what growing numbers of people are discovering – how family history research fulfills a need to belong or feel connected,” said Verkler. “Each new discovery into our family history provides immense satisfaction. What we learn can expand family relationships in the present and helps us better understand ourselves as we realize our ancestors struggled with similar or greater challenges.”

One video depicted the journey of Mailie Mossman, a Hawaiian woman who found uncommon inner strength that helped her survive her own breast cancer. Though her research, she learned of the remarkable life of her great-grandmother Emma Lyons Waimau, who suffered from Hansen’s disease (leprosy).

Emma had been forced to leave her family on Christmas day 1894 to live in Kalaupapa, a quarantined colony inhabited by others who had the disease. While there, she fell in love, married, and went on to give birth to six surviving children. By law, she was forced to send each child away from Kalaupapa within the first year of life to ensure the children did not contract the disease.

“As I speak about it, I feel sadness in my heart,” said Mailie. “I find her story so interesting because whatever she has in her, I would hope to have in me.”

After searching through thousands of grave sites twice, Mailie finally found the resting place of her great-grandmother Emma. The experience was very emotional for Mailie, as years of her searching, pain, loneliness and joy finally came together.

“As a result of my having breast cancer, I have been able to look at what happened to Emma and how she dealt with her illness. I’ve learned so much about life – my life – through Emma’s life,” Mailie continued. 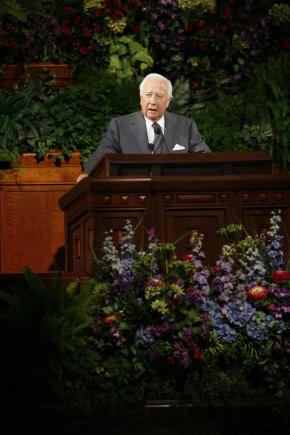 To the delight of the audience, two-time Pulitzer Prize-winning author and historian David McCullough returned to the Conference Center for the second time in six months to participate in the program. In December 2009, he worked with the Mormon Tabernacle Choir and Orchestra at Temple Square for their annual Christmas concert.

During his remarks, McCullough spoke about the nature of history and how we must come to understand those who came before us. “The more we know, the more we want to know. Curiosity is accelerative,” he said.

“It’s been very exciting to have the National Genealogical Society conference in Salt Lake City,” said David Rencher, chief genealogical officer for the Church. “This is the first time since 1985 that the conference came here, and we are absolutely thrilled to have so many people come.”

Home to the world’s largest genealogical library, Salt Lake City has much to offer genealogy aficionados. The library’s collection includes over 2.4 million rolls of microfilmed genealogical records; 727,000 microfiche; 356,000 books, serials and other formats; over 4,500 periodicals; and 3,725 electronic resources.

The Family History Library was founded in 1894. Today, it is open to the public at no charge and is visited by an estimated 1,900 patrons or more each day. The library offers free classes and is staffed by knowledgeable volunteers eager to assist researchers.

In addition to the Salt Lake City branch, another 4,600 smaller family history centers dot the globe. These centers, combined with the Web site www.familysearch.org , receive millions of visitors a month.

FamilySearch is working diligently to make more of its records available online and benefits from a small army of volunteers that prepare records for online access. “Right now, over 300,000 people are currently helping create free online indexes that anyone can access,” said Verkler. “There are also several other ways that people interested in family history can help in this effort.”