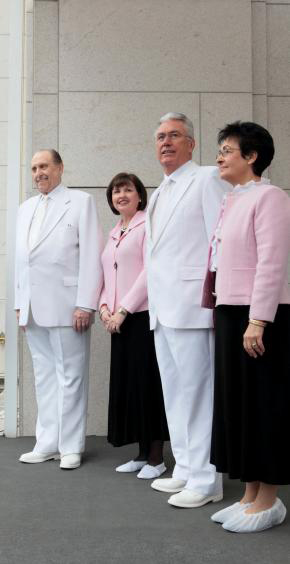 President Thomas S. Monson, president of The Church of Jesus Christ of Latter-day Saints, dedicated the Church’s 131st temple just outside Vancouver, British Columbia, in Langley on 2 May 2010. Prior to the first of three dedicatory sessions, President Monson and his daughter, Ann M. Dibb, joined hundreds outside the temple for the traditional cornerstone ceremony.

A cold, rainy morning did nothing to dampen the spirits of Saints in the region.

“It is a wonderful time for Canadian Latter-day Saints,” he said referring to the recently completed Olympic Winter Games and now the once in a lifetime opportunity to dedicate a temple.

President Dieter F. Uchtdorf of the First Presidency, Elder D. Todd Christofferson of the Quorum of the Twelve Apostles, and Elders L. Whitney Clayton and William R. Walker of the First Quorum of the Seventy also participated in the cornerstone ceremony.

On Saturday evening, prior to the dedication, more than 1,200 youth staged a cultural celebration marking the completion of the temple.

The temple will open Monday to serve more than 22,000 members in British Columbia and northern Washington. The Vancouver British Columbia Temple brings the total to seven planned for or in operation in Canada.