Butterflies in the Archives | Meridian Magazine

Butterflies in the Archives

Butterflies in the Archives
By Marvin Payne

This month’s Backstage Graffiti emerges, dusty and wise, from archives (pronounced “Rk-eye-vz,” which I know because once I had this gig pronouncing through a microphone thirty-three thousand words included in the Random House Unabridged Dictionary, which was one-fourth of them all, the other ninety-nine thousand being pronounced by three other people, each of us sitting in our own kind of soundproofed phone booth that would have served well as a one-man bomb shelter.

And I recorded “archive,” which word wasn’t published until it had been reviewed by Smart People in New York. On second thought, I think I came on board very shortly after “archive,” because the guy they hired originally went raving, stark mad ((just thought I’d switch adjectives and see if it meant the same thing)) and was consigned to St. Mungo’s Under-the-Y, which is the cluster of buildings at the east end of Center Street in Provo ((Utah)) where I believe a young Spencer W. Kimball tried to register for school, thinking it was BYU.).

On my web site https://www.marvinpayne.com I have several pages where, when some poem or lyric or reckless firebrand sermon or knock-knock joke is replaced with something new, the old one goes into a clickable “archive.” This means that a visitor can spend several months at my site and never hit bottom – unless they’re Parley P. Pratt and stay up all night and read it in two days.

The proliferation of exciting journals among the saints being this column’s raison d’etre (BYOFFAM ((“Bring Your Own Funny French Accent Marks.”)) ), I’m mining one of said archives, intending to provide templates for your journal writing. To wit,

This morning at five after one, immediately following a short but intense dream about an enormous ant crawling on my arm, I awoke to find an enormous ant crawling on my arm. I flicked it off, with some difficulty, and knowing it to be quite obviously still alive, began searching for it, lest it should take me again unawares. I found it at last on the curtain, trying to hide, of all things. I killed it, without a license but with good reason, I thought, and measured the carcass with a tape measure. It was five eighths of an inch long. My wife had by now also awakened with some concern and asked what woke me up, to which I replied, “Hoofbeats.”

[We wish to interrupt the writing of this column for the birth of a monarch butterfly. Several weeks ago a friend gave us a stalk of milkweed with two tiny butterfly eggs on it – so tiny you could hardly see them. A few days after that, a skeensy little snip of thread emerged from each one. These rapidly grew into two great bit fat juicy caterpillars, stripe-y and bendy, which rapidly ate the milkweed stalk and threatened the rest of the cabin (a downside to building your house out of something organic). Then one disappeared. ??? The other, in time, hung by its toes, made a little “J” out of itself and became a chrysalis. After church last Sunday, my little son John hollered and gathered us down around the leg of a wooden chair where a monarch butterfly was opening and closing its wings. We took the whole chair outside, and when the wings were all the way dry, it (actually “he” – John can tell the difference) flew first to the vine on the fence, then posed for a picture with Baby Adwen, then flew to my wife’s sleeve, then to the aspen, then to Mexico.

In the middle of this process, my wife went into the house and found the chrysalis that we’d had under daily scrutiny hanging there perfectly intact! This butterfly was the missing caterpillar! Two days passed. The remaining chrysalis turned brown, then transparent – you could see orange and black through the wall. About an hour ago the butterfly busted out, all wrinkly and curled up. For a good while it flexed its abs and pumped up its wings. Now we’re outside with the milkweed in a basket (the leaf from which it was hanging had fallen from the stalk a while back and we’d propped it up with a Bic pen). It still hasn’t moved much, probably waiting for Cait to get home from school, but I’m sometimes typing without looking, so that when it first opens its wings I can take a picture. I’ve put down the ibook several times so far for false alarms. Sorry for the interruption, but sometimes even the gravest of enterprises must come to a halt to accommodate miracles. This butterfly is aptly named “Mystery Magic.” Back to the column. Oh, his brother’s name was “Jake.”]

I was playing in the band for a production, at Sundance, of “Li’l Abner.” Banjo and harmonica mostly – but also a little percussion and honky-tonk sound effects when Stupefyin’ Jones would strike comely poses. It’s time to start, and the player who delivers the role of the Government Scientist hasn’t shown up. (This is the character who comes to Dogpatch and interviews the hillbilly residents to determine if their town would make a good target for bomb testing.) The artistic director of Sundance, Jayne Luke, yanked me out of the band and tagged me to go in and play the crucial scene. We tore through costumes from the alternating show, “Carousel,” and found a suit that my character might wear and, mercifully, the Scientist had been blocked to carry a clipboard, upon which Jayne slapped a couple of pages of script.

Now for the tricky part. The band had been playing for weeks from offstage left. The pianist and conductor could see the stage, but I couldn’t. I hadn’t the slightest clue where the Scientist had been directed to go, or where any of the other characters with whom the Scientist interacted were to be found. (I think maybe Jayne didn’t know this about me.) The solution: I decided to play a Government Scientist with really, really, really bad eyesight. I scrounged up some prop spectacles and stumbled out onto the stage, purposefully addressing trees, rocks, and outhouses. The other players turned and pushed and led me hither and thither, and I think the audience hadn’t a clue I was faking it, when we had a

The scene in question was three pages long. I had pages on my clipboard, which the audience completely forgave me for peering at quizzically, and writing on. Trouble is, Jayne had only given me two of the three. But I did happen to remember the line that closed the scene, so when I lifted that second page and saw a blank clipboard, I intoned it with great authority and got the heck offstage. This gave the rest of the cast the opportunity to figure out how to sandwich into the next couple of scenes all the pretty critical exposition that I had just edited out.

They did heroically well and, happily, the real Government Scientist showed up at intermission. This was a great gift, because I wasn’t looking forward to the Government Scientist scene at the beginning of Act Two, the one involving the Latin American dance production number. The dress and fruited hat wouldn’t have looked nearly so good on me as it did on her.

[I got Mystery Magic’s picture! Now I can pay attention to what I’m typing to you guys!] 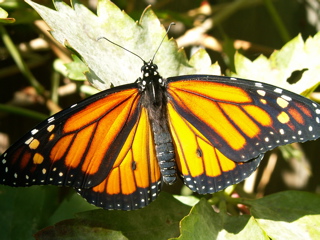 (I wrote the following ((true)) story to take to a Valentine’s party for a “guess whose courtship” game. Because you’re not playing the game, I’ve inserted bracketed explanations.)

She was contracted by a local municipality to help prepare a presentation tracking genetic commonalities among mass murderers. [She was co-directing a community theatre production of “Arsenic And Old Lace.”] He was brought in as an expert on the criminal mind. [I was cast as Jonathan, the really bad big brother.] They had enjoyed, before this, a respectful arms-length association. [I hadn’t yet persuaded her to go out with me.] Glancing through the resources that had been collected for the project [the pile of props backstage], he recognized a rare book, of which he also happened to have a copy. Deeply intrigued, he held it up and asked whose it was. She said, “That’s the autobiography of my great-great-great grandfather. Why do you ask?” He answered, “Because this is the autobiography of my great-great grandfather! You know what this means, don’t you? Our children will be idiots.” He and she were married nine months later. Their posterity is still under observation.

(During the early eighties, I played a one-armed guy named Charlie who hangs out on a mountaintop serving as sentinel over an American frontier village. It was an adaptation of a book by Blaine Yorgason. In the course of Charlie’s lifetime, he builds a pile of rocks up there, each stone representing some memory or lesson learned, hence the title “Charlie’s Monument.” The monument was pantomimed. Over the course of a couple of hundred performances, things generally went as scripted. But not always.)

Tonight I got an eight-inch rip in my pants near the beginning of the show, fell through a half-ton of monument while sitting down to fly a kite, told my wife Nellie not to worry about our ailing daughter Anna because I’d called the doctor (it’s 1890 on the frontier and we live in a shack), and picked Nellie up for the finale, whirled her around and well-nigh pitched her off the mountain. But people seemed to forgive.

(As I typed this entry for you, I also seemed to remember being so enthusiastic that night about getting resurrected with a new arm I’d never had in mortality that I poked myself in the eye with my new thumb. Well, what would you expect?)

I’m doing a goofy little promotional film for a publisher. (I’m a professor, zealously getting in shape to battle “bookaholism” – don’t ask me, I just act.) They needed a “jogging-in-the-sunset” shot, and since I’m acting at Sundance every evening but Sunday, we had to shoot it tonight. So I spent the evening jogging up and down Wasatch Boulevard in red shorts, horn-rim glasses, a bow tie, wingtips, and a lab coat. Some cars drove by, turned around, and drove by again, apparently unwilling to suspend their disbelief.

(Playing Lehi in a church film for visitors’ centers.)

Very late last night off in the west desert we were shooting in Lehi’s camp on top of a ridge. On a tall crane was mounted a 12,000-watt light that lit up our couple of acres of set like day. Some of the actors hadn’t arrived yet from base camp at the bottom of the hill, so the guys on the crane tightened the focus and pointed the light out toward the highway, a mile away, very lonely two-lane strip laid out like a ruler in the dark valley. They picked up the only car on the road and followed it for about half a mile, casting all around it a bright moving circle about fifty yards in diameter. For years the driver of that car will tell about the circle of light that came from nowhere and followed him through the west desert. A close encounter. I just really hope he was alone. You have to keep these film guys busy.

[I’m looking up into the aspen. Mystery Magic is gone. Mexico. Dude.]

“…come unto Christ, and lay hold upon every good gift…” (from the last page of the Book of Mormon)