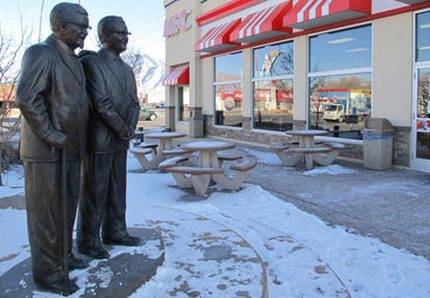 As most people know, KFC was originally founded by Harland Sanders, an entrepreneur who began selling fried chicken from his roadside restaurant in Kentucky, during the Great Depression. Sanders identified the potential of restaurant franchising, and in 1952, Pete Harman opened the world’s first “Kentucky Fried Chicken” franchise in Salt Lake City, Utah.

Don Anderson, a Utah sign painter hired by Harman, coined the name “Kentucky Fried Chicken”. Sanders then adopted the name because it distinguished his product from the deep-fried “Southern fried chicken” product found in restaurants.  Due to his company’s expansion, it soon became too large for Sanders to manage, and so in 1964 Sanders sold his company to a group of investors led by John Y. Brown, Jr. (who later became Governor of Kentucky) and Jack C. Massey (who later founded Hospital Corporation of America).

My father Kent Prestwich opened some of the first franchises for KFC and then went on to become an Executive Vice President for the young KFC Company. While he was in that position, the company exploded in growth in the late 1960’s.

One day at the request of Lehman Brothers, one of the largest investment banking firms in the country, my father Kent, Jack Massey, and John Brown were invited to come to the Lehman Brothers headquarters in Manhattan, NY, to discuss KFC’s opportunities for future growth.  KFC was in the process of trying to raise a very large amount of capital for expansion. After the KFC group concluded their presentation to the bankers, one of the officers of Lehman Brothers said, “Before we break for lunch, it is customary that we have a toast commemorating the anticipated success of the deal, and it is customary that we toast with Sherry wine.”

My dad was sitting at a large round conference table and was one of the last people the waiter approached. So many thoughts were racing through his head.  The President of KFC whispered to him, “Kent don’t blow this by turning down just one drink! This is very important deal. It is the way they do business here!”

My father quickly tried to think of possible ways he could get out of drinking the wine. He thought he could pretend to drink the Sherry or maybe he could just drink it and who would really care this one time. Besides, who at Lehman would even know that he was LDS. My father finally came to the conclusion that the covenants and promises he had made to the Lord were more important than the business deal.  With everyone in the room carefully watching, he turned to the waiter and said, “No thank you, I’ll just have a tomato juice please.”

At this point the KFC owners John Brown and Jack Massy were furious with my father. Jack angrily said, “this is just one drink, just one time!”  They were not happy at all! If my dad blew the deal it would have terrible ramifications for the future of KFC and my father.  They all knew that tens of millions of dollars was at stake for Mr. Massey and Mr. Brown to expand their KFC business. The pressure was unbearable.

The waiter graciously sent a runner down to the street corner market to purchase some tomato juice for my father to join in the toast. After the toast, the group broke up for lunch and Mr. Massey and Mr. Brown told my father that they would eat without him and left in a huff.  They swore under their breath that my father had likely ruined the deal.

After lunch, the senior Lehman Brother officer sent a request to have my father come to meet with him privately in his office. My dad walked into the large and prestigious office and sat down. He braced for the bad news. The CEO then asked, “Kent, why didn’t you take the Sherry?”  My father honestly explained that it was against his religious beliefs. The banker then replied:  “We know you’re a Mormon and we were just testing the integrity of the leadership of KFC to see if you could pass this test before we loaned you the money!”

With a great sigh of relief, my father suddenly realized that he had successfully passed a critical part of the due diligence test being conducted by this powerful brokerage firm. Lehman’s investigators had already uncovered my father’s religious beliefs and the Lehman management team had decided to test my father’s commitment with wine and the traditional business toast.  By not partaking of the Sherry, my father helped to close the successful multi-million dollar deal.  He quickly went from having ridiculous morals to being the hero of the day.  John Brown later confirmed this story with our family after my father’s passing.

My name is Julie Kelly Mclaws, Kent was a dear friend and business partner with my father Joseph Kelly in the early 70's. They met in Las Vegas and opened KFC franchises in Bakersfield together. I remember Kent coming to our home on several occasions. My father died in 1981 at age 52 and Kent was very supportive of our family. My father sure admired Kent

Knew Kent Prestwich when we worked for a small group of UC Radiation Lab Employee's at Mercury NV in 1960. He later opened up the First KFC Franchise in Las Vegas. Would like to hear from Kurt more about his later life. I had heard that he became a VP at KFC & that after leaving them opened up his own Chicken Franchises.