Discovery may lead to lower doses of chemotherapy | Meridian Magazine 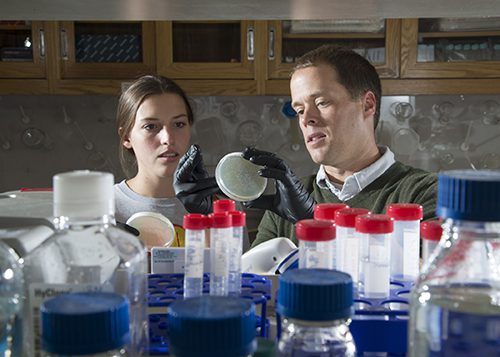 Discovery may lead to lower doses of chemotherapy

No matter what type of chemotherapy you attack a tumor with, many cancer cells resort to the same survival tactic: They start eating themselves.

Scientists at Brigham Young University discovered the two proteins that pair up and switch on this process – known as autophagy.

“This gives us a therapeutic avenue to target autophagy in tumors,” said Josh Andersen, a BYU chemistry professor. “The idea would be to make tumors more chemo-sensitive. You could target these proteins and the mechanism of this switch to block autophagy, which would allow for lower doses of chemotherapy while hopefully improving patient outcomes.”

Lower doses would mean milder side effects. The prospect spurred an international hunt for this switch. For good reason, several other labs started with a protein called ATG9 as their prime suspect and then looked for its accomplice among thousands of other proteins.

But the BYU team, comprised mainly of undergraduate students, stumbled into the race unexpectedly, coming at it from a different direction. They wanted to know why cancer cells made a surplus of protein called 14-3-3 zeta.

Using breast cancer tissue in the lab, they forced tumor cells to undergo autophagy by depriving them of oxygen and glucose. A comparison with a control group let them see that the two proteins hook up only when under attack. That’s because stress makes Atg9 undergo a modification that enables 14-3-3 zeta to bind with it and switch the cancer cells to survival mode.

“This unique approach we used, partially by luck, gave us an advantage,” Andersen said. “I don’t think we would have discovered this through more conventional approaches.”

The study results appear in the journal Molecular and Cellular Biology.

Andersen notes that several medicines already exist that could block autophagy and make chemotherapy more effective. One of them is called chloroquine, an anti-malarial drug invented in 1934. In the event that this and other existing inhibitors don’t cross-over safely or effectively, the study offers a blueprint for development of a drug specific to the task.

Ph.D. candidate Vajira Weerasekara directed the experiments and was lead student author in the study. Undergraduate students David Panek and David Broadbent also made significant contributions to the research and appear as co-authors. When they complete their degrees at BYU, Weeraskara will re-join the faculty at the University of Colombo in Sri Lanka, Panek will go to medical school, and Broadbent will pursue a joint M.D. and Ph.D. program.

Mentored research is a large reason why BYU ranks so highly as a Ph.D. launch pad. According to the National Science Foundation, BYU ranks 5th in the nation for the number of graduates who go on to earn doctorate degrees.