Editor’s Note: This article was first published in Forbes. It is reprinted here with permission.

If you’re like many business leaders, you feel the pressure to produce measurable results.

But what if you had to do it in a conspicuously public way? And on a relentless schedule that never, ever, accommodates pesky little things like holidays or other forms of time out?

What if your efforts were showcased every week on more than 2,000 radio, television, and Internet outlets all over the world?

And what if your team consisted mostly of volunteers? That’s right, unpaid volunteers! 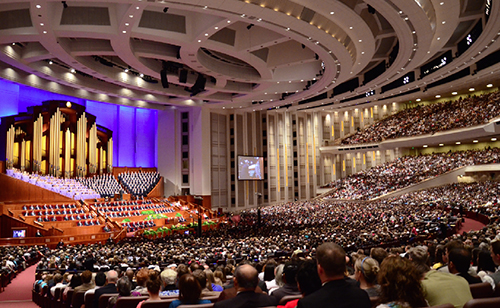 That’s the Mormon Tabernacle Choir, one of the most recognizable “brands” on the planet. And all this magic is pulled off by a leadership team that includes a retired elementary school principal, an ex Procter & Gamble marketer, and a former human resources chief for a large food wholesaler. Experts in arithmetic, soap, and groceries can apparently combine for great music. Who would have guessed?

Originally established in 1847 by The Church of Jesus Christ of Latter-day Saints, the MoTab, as it’s affectionately called, is an international phenomenon. Its weekly broadcast, launched in 1929, is the undisputed longest running, uninterrupted program in radio history.

The Choir has done more than 200 recordings and won countless awards including Grammys and Emmys. It’s performed at 13 world fairs, at the inaugurations of ten U.S. presidents, at the Olympics, and at concerts in 28 countries. Its non-denominational worldwide audience is in the tens of millions.

So, how can all this be pulled off with mostly volunteers?

The formula is fairly straightforward. And to a great extent, much of it can be adapted in a traditional business environment.

Rodger Dean Duncan is the bestselling author of CHANGE-friendly LEADERSHIP: How to Transform Good Intentions into Great Performance. Follow him on Twitter @DoctorDuncan

One of the Lord's tender mercies. During the 2013 Midwest tour, the "logistics wizard" worked it out to allow the choir to stop in Black River Falls, WI, to honor the Mormon logger missionaries who had come to the Wisconsin Pineries to harvest the timber needed to build the original Nauvoo Temple. AND to dedicate an historic maker now located in a park across the street from where the sawmills were located. Not only that, the choir then came to the little community of Neillsville, WI, (which is right in the middle of where all the white pine was harvested) to have lunch and relax at The Highground before they went on to their final destination in Minneapolis. Blessings of all blessings, I was able to be a part of the magic worked by the "logistics wizard".