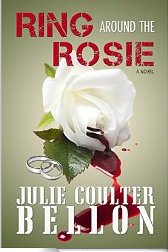 Julie Coulter Bellon in Ring Around the Rosie proves once again she is a master at capturing her audience from the very first page. In her latest Hostage Negotiation Team suspense novel she literally begins with a bang. Captain Ron Reed waits at a restaurant near the police station at the conclusion of a successful negotiation where three lives were saved. The team is not only celebrating a successful job, but the marriage to take place the next day of Claire Michaels, their best negotiator. She arrives, but before they can order dinner Ron’s angry ex-wife shows up accusing him of ordering her to be there, then an explosion rips through the building and the few survivors are herded into a concrete reinforced room by a group of gunmen.

The leader of the terrorist group is testing a new explosive and using it to take revenge on Ron for sending him to prison five years earlier. He blames Ron too for the loss of his family. A game of wits ensues as one by one Ron gives up his bank account, his passwords, and all of his material possessions in order to secure the release of the critically wounded and frightened hostages, including his team, until only he and his ex-wife Sarah are left. In their desperate struggle for survival they discover new answers to the problems that resulted in their divorce. They also come to the conclusion that the attack on them was merely a rehearsal for something bigger.

The characters in this book are easy to like and there is strong growth in both Ron and Sarah as they are forced to look at their failures, come face to face with death, and discover what really matters to them. Supporting characters are distinct individuals, showing both positive and negative qualities. The concept of family plays a strong role in this story as does the destructive urge for revenge.

Unlike most suspense novels, the most suspenseful portion of Ring Around the Rosie is the first two thirds of the book. The rest of the book is exciting and wraps up the story nicely, but doesn’t have quite the edge-of-your-seat quality the first part has. It’s kind of like the nursery rhyme, “ring around the Rosie” until we’re dizzy then “we all fall down”, and nobody knows where we’ll land. Suspense readers as well as anyone who just enjoys an absorbing story will enjoy this one.

Julie Coulter Bellon is a native Canadian who now lives with her husband and eight children in Utah. She is a busy mother, writer, and teacher. She is the author of eleven published books and the recipient of several writing awards.