Elder David A. Bednar, a member of the Quorum of the Twelve Apostles of The Church of Jesus Christ of Latter-day Saints, called for Mormons to use social media to “sweep the earth” with authentic and uplifting messages.

His message, given Tuesday during a Brigham Young University Education Week devotional in Provo, Utah, focused on the power of the Internet and particularly social media to communicate truth. Elder Bednar called our time a “unique season in the history of the world,” in which we are blessed with “a miraculous progression of innovations and inventions that have enabled and accelerated the work of salvation.”

“Approximately 40 percent of our worldwide missionary force soon will be using digital devices as tools in the work of conversion, retention, and activation,” he said. “I am confident all of us also recognize how technology has accelerated family history and temple work, our individual and family study of the restored gospel, and made it possible for us to learn about, see, and experience the world in remarkable ways.”

Elder Bednar pointed to recent social media efforts by the Church and its members, including an Easter video, Because of Him, which was viewed more than five million times in 191 countries and territories around the world during Easter week.

He cited other examples, such as the hundreds of people who used the #didyouthinktopray hashtag to share a photo with a placard telling when they pray, which led to more than 40,000 conversations about the need for prayer. 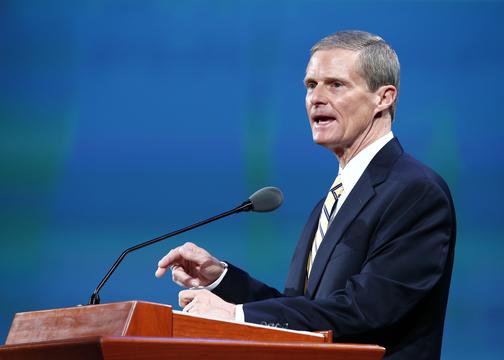 While these and other efforts to share gospel messages, including Church leaders using social media, have had an impact, Elder Bednar called them “a good beginning but only a small trickle.”

“I now extend to you the invitation to help transform the trickle into a flood. Beginning at this place on this day, I exhort you to sweep the earth with messages filled with righteousness and truth messages that are authentic, edifying, and praiseworthy and literally to sweep the earth as with a flood,” urged Elder Bednar. “I pray we will not simply participate in a flash flood that rises swiftly and then recedes just as rapidly.”

Elder Bednar encouraged listeners to be authentic and consistent when using social media and to only share content that uplifts and edifies. “We should not exaggerate, embellish, or pretend to be someone or something we are not. Our content should be trustworthy and constructive. Anonymity on the Internet is not a license to be inauthentic.”

“We and our messages should seek to edify and uplift rather than to argue, debate, condemn, or belittle,” explained Elder Bednar. “Be courageous and bold but not overbearing in sustaining and defending our beliefs, and avoid contention. As disciples our purpose should be to use social media channels as a means of projecting the light and truth of the restored gospel of Jesus Christ into a world that increasingly is dark and confused.”

During his address, Elder Bednar also announced the release of “Meet the Mormons.” The film is a documentary feature produced by the Church that will make its debut in select theaters in the U.S. on 10 October.

“This movie is one additional way members can share their beliefs with family and friends in a simple and effective way,” he told thousands of attendees gathered at the Marriott Center and tuned in to the live broadcast of his address. “‘Meet the Mormons’ addresses common misperceptions about our beliefs and highlights the blessings that come from living the gospel of Jesus Christ.”

The movie tells the stories of six diverse Latter-day Saints: engineer and humanitarian Bishnu Adhikari who is originally from Nepal; Ken Niumatalolo, the head football coach of the U.S. Naval Academy; Carolina Muoz Marin, an amateur kickboxer from Costa Rica who runs a charity with her husband; Jermaine Sullivan, an academic counselor and bishop in Atlanta, Georgia; Utah missionary mom Dawn Armstrong; and Col. Gail Halvorsen (Ret.), the man known as “the candy bomber” during the Berlin Airlift in the 1940s. (Learn more about “Meet the Mormons.”)

All proceeds from the film will go to charity.

Elder Bednar stressed that Church members need not spend inordinate amounts of time creating and sharing elaborate messages nor become social media experts or fanatics. “Too much time can be wasted, too many relationships can be harmed or destroyed, and precious patterns of righteousness can be disrupted when technology is used improperly. We should not allow even good applications of social media to overrule the better and best uses of our time, energy, and resources.”