VIDEO: Church Expands Use of Digital Devices for Missionary Work

More missionaries of The Church of Jesus Christ of Latter-day Saints will be using digital devices as they preach the gospel in the United States, Canada, Japan and Western Europe. The First Presidency and the Quorum of the Twelve Apostles are expanding the use of mobile devices following a successful pilot program that has been in place since last fall involving 6,500 missionaries in 30 missions in the United States and Japan. Missionaries are equipped with specially configured iPad minis for studying and teaching the gospel.

Church leaders will also implement online proselyting in the United States, Canada, Japan and western Europe following a test in those areas for more than a year. Sister missionaries in some of the Churchs visitors centers are also using digital devices and online proselytizing as part of their daily activities.Thousands of missionaries in 35 missions used either a mobile device or existing computers in Church buildings, public libraries or other approved locations to use social media such as Facebook. An emphasis will still be placed on their assigned areas.

By early 2015, the Church expects that more than 32,000 missionaries in more than 162 missions will be using mobile devices. The expansion will begin later this year. The missionaries will be asked to buy their pre-configured iPad minis, which they can keep after their missions, much like they purchase and use their own bicycles. Those who cant afford the $400 devices will be offered assistance.

“It has been a wonderful experience,” said Elder David F. Evans, a member of the First Quorum of the Seventy and executive director of the Churchs Missionary Department. “We’ve learned that they’re very effective tools for planning, for communicating with local leaders, for communicating with their mission president, and for keeping in contact with the investigators that are currently being taught [and] former investigators that they may have taught, either in the same area or some earlier place.” 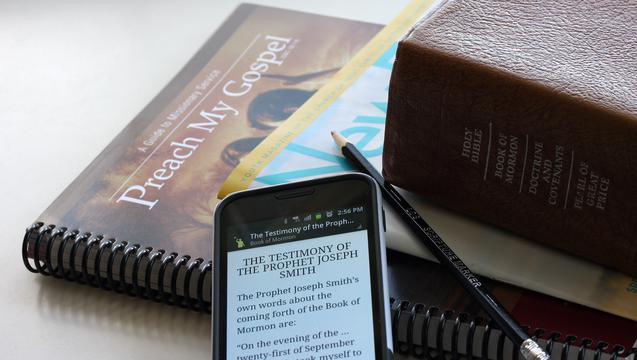 “And we know in many parts of the world, the traditional forms of proselyting work very, very well,” said Elder Evans. “In some other places where technology and urban life has developed in such a way that missionaries have a harder time contacting people, we hope that these tools become even more valuable in those places.”

Church leaders envision that mobile devices will eventually enable missionaries to begin their formal preparation for missionary service before they enter the missionary training centers (MTCs), and then continue to use them for language and gospel study and to improve their ability to teach the gospel when they enter the mission field. “And then because of the ability to learn beforehand and to learn after the MTC, we anticipate that the MTC experiences will remain shorter as they are now as compared to earlier times,” Elder Evans said.

Missionaries are also learning how to develop positive lifelong digital habits. “We know that even with filters and every other safeguard that we can provide that the only really effective filter for lifelong technology use is the individual heart and mind of the individual young person,” stressed Elder Evans.

He acknowledged that the implementation of the technology will look different in various locations and they will work closely with area presidencies to determine whether missionaries can use the devices safely in all areas.

“If you started August of last year and go through our last report, month over month the baptisms are up,” he added.  “Right now for this year there’s about an overall 15 percent increase in the number of convert baptisms this year compared to a comparable period last year. And we are gratified by that, but again, recognize that that’s not the main purpose for what is happening. The greater purpose is to offer the opportunity of missionary service to those who would like to perform this service, meaning the young people of this Church.”

The number of young missionaries serving grew dramatically after the announcement by President Thomas S. Monson in October 2012 that lowered the age required from 19 to 18 years for men and 21 to 19 years for women. At that time 58,500 missionaries were serving compared to 86,000 today.

“They responded magnificently to President Monson’s invitation, and thus the increased numbers of both elders and sisters and even senior couples,” said Elder Evans. Last year at this time, 58 new missions were created that he described as the “appropriate size” after the surge of missionaries.

Elder Evans said the changes have also allowed sister missionaries to gain more leadership experience. “We’ve seen them participate in what’s now known as the mission leadership council, and we’ve seen them really respond in a wonderful way to the opportunity now to not only serve a mission, but also during the course of that participate in the mission leadership council, to provide input and counsel with regard to the direction that a mission would take and the challenges and problems that are faced, as well as the opportunities.


Mission leaders report that the early return rate for elders and sisters has gone up, but it is very close to the proportional rise in the entire number of the missionary force. “As we have more missionaries, we’re going to have more of everything,” said Elder Evans.

Elder Evans said the safety of the missionaries will continue to be a high priority, although he said it is safe to serve a mission. “I’ve read statistics that suggest that being on a mission may be as much as 20 times safer than being generally out in the population.”

He explained that with more young missionaries serving, the Church will likely launch a missionary safety program that will encourage them to start their day with a “safety moment” for riding bicycles, service projects and other activities. “And we hope that by raising the sensitivity of missionaries to safety issues, that in and of itself will begin to diminish any potential for injury that there might be. We love these missionaries, and we know the Lord loves these missionaries, and we are committed to absolutely doing everything we can to protect their safety.”