At the request of Brazil’s Ministry of Sports, around 1,000 members of The Church of Jesus Christ of Latter-day Saints in Brazil are volunteering their time to help Brazil host the 2014 FIFA World Cup. 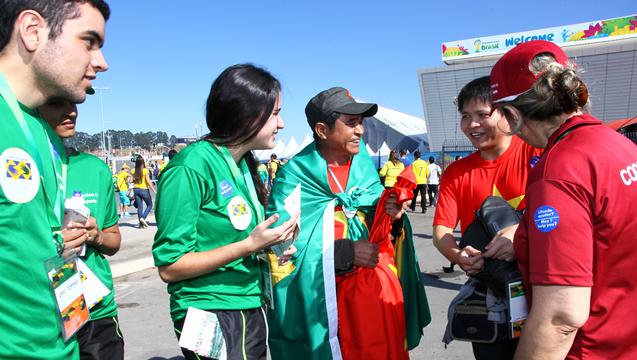 Mormons and their friendsthose 18 years old and olderare taking part in Brazil Volunteer, the volunteer force behind this year’s World Cup and other events such as the 2016 Summer Olympic Games in Rio de Janeiro. They’re trained to receive visitors at airports and work at tourist sites and other popular locations during the World Cup, which will go from June 12 through July 13.

For nearly two decades, the Church has been known throughout Brazil for its many Mormon Helping Hands (MHH) projectscommunity service projects that often involve hundreds and even thousands of Latter-day Saint volunteers.

In 2013, Sarah Menezes, then national coordinator for Brazil Volunteer, worked with MHH volunteers during the Confederations Cup and was impressed by their service. “[Mormon] Helping Hands volunteers are the most organized and dedicated,” she said. “We need you at the Cup.”

As a result, representatives of Brazil’s Ministry of Sports approached the Church about providing volunteers for the 2014 World Cup.

Over the years, Mormon Helping Hands volunteers in Brazil have cleaned city parks, refurbished public schools, assembled and donated materials for newborn baby kits and provided other service in their various communities. In 2013, Mormon Helping Hands volunteers came to the rescue of many people who lost their homes during the heavy rains in southeast Sao Paulo; they also donated blood on a nationwide “Helping Hands”” day, where they partnered with blood collection agencies throughout Brazil.

The Mormon Helping Hands program of the Church, carried out in many parts of the world, reflects the desire of Latter-day Saints to follow the example of Jesus Christ by serving others.