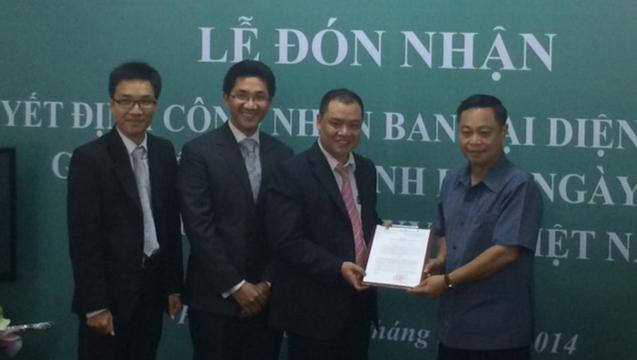 In a ceremony Friday morning at the Church branch facility in Hanoi, Mr. Pham Dung, chairman of the Vietnam Government Committee for Religious Affairs (CRA) presented the official national certification to Church leaders, members, and friends. Chairman Pham Dung was joined by other members of the Committee on Religious Affairs and other Vietnam government officials.

Eni Faleomavaega, the former chairman and current ranking member of the U.S. House Foreign Affairs’ Subcommittee on Asia and the Pacific, sent a congratulatory letter, which was read at the ceremony. It expressed appreciation to the government of Vietnam and its leaders, with whom Faleomavaega and Church officials have worked closely.

Hoang Van Tung, president of the Church’s Hanoi district and chair of the Interim Representative Committee, said after the meeting that the Church is committed to continue abiding by the laws governing religious activity in Vietnam. He also said the Church in Vietnam would not be making further announcements of what the recognition means in specific terms for members until more details are worked out.

What does this recognition mean?

This is a significant step for the Church in Vietnam. It provides for a body that is officially recognized by the government of Vietnam to act for the Church on a nationwide basis.

What is the Interim Representative Committee? Who is on this committee?

The Interim Representative Committee consists of three Vietnamese Church leaders from around the country (the Hanoi district president and the two Ho Chi Minh City branch presidents). With this recognition, Vietnam’s government has given this committee national recognized legal standing to represent the Church in Vietnam.

How many members of the Church currently live in Vietnam?

How will this affect missionary work in Vietnam?

The appointment of the representative committee will allow for additional dialogue and discussion with the government on this and other subjects. As part of religious practice in Vietnam, the Vietnam government has invited the Church to have more members in more locations. Currently, Vietnamese “branch builders” strengthen members and build branches at registered locations.

What is the current Church organization in Vietnam?

Three Church congregations in Vietnam are organized into the Hanoi District of the Church. In addition to the Hanoi Branch, there are two branches in Ho Chi Minh City.