Amazingly, the weather forecasts improved dramatically in the past few days and this total lunar eclipse on Jewish Passover on April 15, 2014 was grandly visible in the midnight and early morning sky in the US mountain west. I clocked the total eclipse phase from 1:07 until 2:25 a.m. with 1:46 a.m. about the middle. The full moon was a beautiful dark red color and a good view in binoculars and a small telescope. 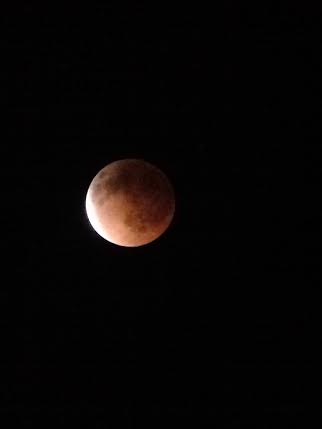 The April 15, 2014 eclipse photographed by my nephew Logan Millett from Mesa, Arizona.Additionally, the example tetrads of 1492, 1948 and 1967 seem to come after the events they predict. This is backwards from the prediction of key future events after the four blood moons of 2014-2015.

The example predicting the events of 1492 has blood moons in 1493-1494. Shouldn’t it be the other way around? Shouldn’t the sign (the blood moons) precede the fulfillment of that prophetic sign (Columbus and Jews Exiled)?

So, these examples for me do not bolster the argument that the 2014-2015 tetrad is a sign before future events. The subtitle of Pastor John Hagee’s “Four Blood Moons” book, “Something is about to Change” refers to future events. Pastor Mark Blitz, who developed the blood moon theory, believes that the current eclipses are “a sign of the coming of significant world events.” The historical tetrad examples do not seem to support either prediction.

However, in the context of the past tetrads, there seem to be enough problems with the 2014-2015 tetrad theory to recommend that it should not be considered “a sign of the coming of significant world events” taken as a group of four blood moons.

I believe that the current group of blood moons together are not an omen for the future of Israel.

Seems to be more of a philosophical argument (imprecise connections between Hagee's premises and conclusions) against Hagee's contention that the blood moons are connected with significant Jewish events, rather than an statement of whether or not these blood moons are the signs the Joel the prophet referred to. That is the more salient question if you ask me. I guess we do not for sure but they (the blood moons) certainly look like red "wonders in the heavens above" to me.