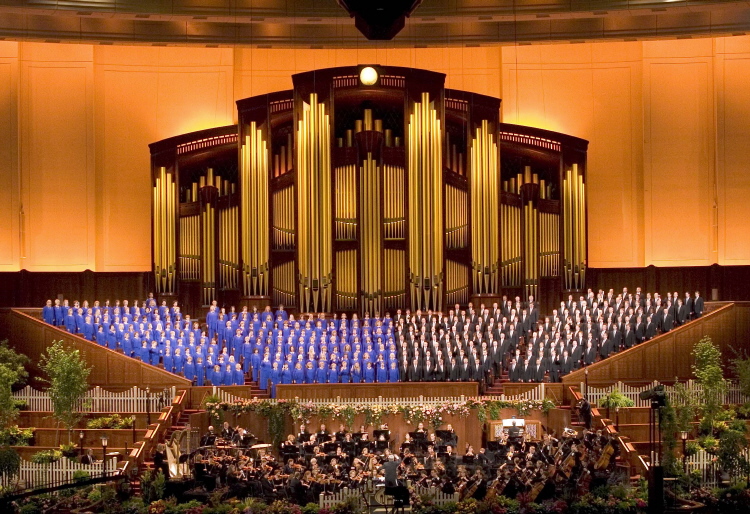 The Mormon Tabernacle Choir and Orchestra at Temple Square will visit five cities on the Atlantic Coast next summer – their first visit to most of the region in over a decade. The tour will include stops in Bethesda, New York City, Saratoga Springs, Bethel Woods and Boston from 24 June through 7 July 2015 and will feature the 360-voice world-renowned choir and 68 members of the Orchestra at Temple Square.

“There is nothing quite like hearing the Choir live in concert,” says Ron Jarrett, president of the Choir. “We love going on the road to connect with our audiences on the Eastern seaboard who will experience the pure joy music can bring to the hearts and minds of its listeners.”

The Choir’s repertoire will cover everything from Bach and Broadway to American folk hymns and spirituals. Tickets for the tour will become available by the end of year with the exception of the concert in Bethesda, Maryland, where tickets are now on sale (https://www.strathmore.org/eventstickets/calendar/view.asp?id=10628). More specific information on dates, venues and tickets is included below and is also available on the Choir’s website (mormontabernaclechoir.org/tour) and on its Facebook page (facebook.com/mormontabernaclechoir).

The 2015 Atlantic Coast tour performances will begin on Thursday, 25 June, with a concert in Bethesda, Maryland, at the Music Center at Strathmore. The Choir has visited Maryland only one time before, over 100 years ago. The next stop on the tour, on Saturday, 27 June, will be at the Bethel Woods Center for the Arts, on the site of the 1969 Woodstock festival in Bethel, New York. The Choir and Orchestra will then head to a performance at the Performing Arts Center in Saratoga Springs, New York, on Monday, 29 June. Saratoga Springs was the site of a well-attended concert by the Choir and Orchestra on their 2003 tour. Then it’s on to the Big Apple for two concerts in Carnegie Hall. The Choir is no stranger to New York City, having performed there six times previously, the last time a decade ago in 2003. The Atlantic Coast tour will conclude with a final concert in the Wang Theatre in Boston, Massachusetts, where the Choir and Orchestra last visited in 2003.

Since its first tour outside of Utah in 1893, the Choir has toured extensively across the United States and abroad. It has performed throughout Europe and in music capitals from Israel and Russia to Japan and Australia. Its travels have also included performances at the inaugurations of six U.S. presidents. A full complement of the Orchestra has traveled on tour with the Choir since 2005. The all-volunteer Choir and Orchestra usually tour every other year since all of the performers must take vacation time from their jobs and leave their families to undertake the travel.

The 360-voice choir, accompanied frequently by the 150-member orchestra, can also be heard weekly as part of the Music and the Spoken Word broadcast. This 30-minute program is the world’s longest continuing network broadcast and currently airs on over 2,000 radio, TV, cable and satellite stations worldwide. The Choir and Orchestra are active recording artists with their own recording label, Mormon Tabernacle Choir.

It gives me goosebumps when I think about these wonderful ambassadors for the church and the spiritual impact they have around the world. I am so grateful for them and pray that people will feel the spirit when they hear them sing.