The BYU students in the “Pride and Prejudice” production that I’m also acting in (opens March 21, runs through April 4-be there or be square) are given a grade that is affected by how well they promote the show on social media. This is so different from my bygone experience in, say, “Sweeney Todd,” when we all showed up at the De Jong Concert Hall for one of our final rehearsals, got into costumes and makeup, and then were told that instead of rehearsing we were going to go in pairs throughout the community and get ourselves an audience.

So I, being Mr. Todd, and Judge Turpin, who had assaulted my wife and sent me to prison and for whose revenge I hungered unto madness and murder, went out among the BYU students like two fresh missionaries with a message. Except that I had a razor-a ten-inch razor. We’d knock on a door and my companion would hold up a poster and I would gesture to the pertinent bits of info with my razor. Which was quite effective. Until a particularly sensitive young lady called the cops, who came out and discussed with us the emotional (and possibly criminal) implications of waving a razor about in public.

I’m grateful that in these gentler days, we are expected only to push keys to promote plays, which I am doing right now, even with no hope of a grade enhancement. (These days a razor, albeit virtual, is still to be frowned upon. In “Pride and Prejudice” there are no such weapons, although there is a sharp goose-quill pen, which, in the hands of certain characters ((Mr. Wickham, Mr. Collins, my wife Mrs. Bennet)), could be dangerous. ((Fountain pens are the offspring of such primitive writing instruments, and fountain pens are very important in this ensemble. The playwright, Melissa Leilani Larson, loves them and carries with her everywhere an impressive collection of them, rolled up in a fabric array like those that usually protect fine silver. Or fine razors. Several of the actors flash their fountain pens about promiscuously in rehearsals, explaining to me, “Oh, I had a class from Mel.”

I, who usually carry one fountain pen with me, now carry four-one of them a gift from the playwright. Last night the dance rehearsal came to a dead stop for about five minutes while the Lady Catherine de Bourgh showed her pens to Pat Debenham, who came out of retirement to be our choreographer (((and who might be old enough to remember the goose versions-ha ha))). I admit that I’ve never been in a group before where the discussion of customized nibs was ever likely to come up-unless I brought it up, after which it has invariably died a quick and embarrassed death.)) )

I wrote “choreographer” a few seconds ago. This is not a musical. But the story has dancing, so we dance. A little. Some of the people in it, though, are quite musical. For example, our Mr. Darcy, Ted Bushman, used to accompany ballet classes. That’s hard work. (Ballet is a wonderful thing. I have a recording studio in a building where ballet is taught. Every time I pass by the dance room, I feel like something kind of holy is going on in there. Ballet should be taught. Ballet should be performed. I have yet, however, to feel a conviction that these performances should be watched.) I’ve been springing musical pop quizzes on Ted, lifting the piano lid randomly and pointing to a key. Every time he’s come through with the right name, even when I pointed to the middle key of three black ones, which is a trick question.

In our play Elizabeth Bennett is played by Karli Hall, who, in turn, plays the piano in real life-which is good, because there’s a scene wherein she is commanded to play the pianoforte by the unrelenting Lady Catherine de Bourgh, who is just a girl to whom you cain’t say “No,” at least not in the first act (or at any time when she might want to show you her fountain pen). At the rehearsal in which Karli first actually played the piano (BYU apparently doesn’t have a pianoforte-we’re hoping no one will notice the difference), what she played (Schubert) reminded me, remotely, of my favorite piece of piano music: Brahms’ Intermezzo in A, Opus 118, Number 2.

(So why doesn’t this piece have a name? I mean, instead of a formula? Why isn’t it called, oh, “Droplets In the Moonlight”? That’d be a good name. Or “Snakes Unfolding”? That’d be a bad name, but just as descriptive as the “Droplets” one. Here’s the problem with a concrete name for this piece: Music is abstract art. ((When I was young, the Dean of Fine Arts at BYU found this to be a hard pill to swallow. He was a musician-a good one-wrote terrific hymns. At a particular showing of abstract paintings in the main gallery, he was overheard to declare his dislike of abstract art. The fellow at his elbow, the only person who was supposed to hear the Dean’s declaration, observed that music is almost always abstract art. This observation came under the heading of “an obvious surprise,” meaning “a surprise that’s obvious.”))

It has been said ((I mean, somebody said it before I did, might have been Stravinsky-certainly either Stravinsky or someone else)) that “all the arts aspire to the condition of music.” That is, no matter how highly Rembrandt regards some guy in a helmet, and no matter how poignant may be the back-story of the helmeted guy, the way the painter chooses to capture the image is with primary attention to form, using chemical concoctions of color and light to achieve a balance, a contrast, a blend, a conflict and harmony of parts that would be beautiful to the eye and satisfying to the soul even if the worldly circumstances or history or relationship of the guy and his helmet are a complete mystery to us-which, in fact, to most of us, they are!! Otherwise it’s an instagram of Uncle Hans the fireman. 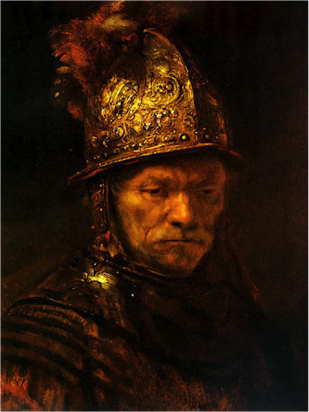 My girlfriend in high school visited our home one December evening to help decorate our Christmas tree. My mother wondered aloud if the lights were evenly distributed. My friend Vicki, whose eyesight wasn’t so good at the best of times, squinted so that she couldn’t discern the distracting bits and bobs in the scene and was able to pronounce the lights perfectly balanced. I think the “representational” artists, the guys ((and dolls)) who draw things that could just as easily be photographed, have the ability to “squint” in a way that liberates the subject from its superficial reality and allows the artist to “abstract” forms and work them in a beautiful way, sometimes not realistic at all. As much as Michelangelo wanted to feel the muscles and organs under the skin of his sculptures, I think something in him wanted to feel only stone worked into lovely shapes. This extends to dance, too. When dance isn’t abstract enough, it degenerates into mime ((which, at its best, rises to the level of dance-it gets universal and abstract again. (((Of course, at its worst, it can require a hunter on safari in “The Far Side” to ask his bearer to hand him the mime gun.))) )) )

So I got on the Internet and ordered the Brahms piece for Karli.

She can’t play it in Lady Catherine’s living room-Brahms didn’t compose it until nearly a century after our story. It was just for Karli, who plays my favorite daughter, Elizabeth.


Which reminded me of the last time I’d thought of Formula 118, Number 2. Four years ago, Audra Macdonald came to Utah and played the lead (Lizzie Curry) in a production of “110 In the Shade.” I was entrusted with the honor of playing her dad, with whom she has a close relationship in the play. (During her portrayal of this role on Broadway, her real father passed away, and so the comfort of her relationship with that character took on a deeper meaning for her.) I’d read in her bio for our printed program that Audra enjoyed playing the piano (none of this “pianoforte” nonsense). So on about our third day of rehearsals I asked her what she liked to play. Right then, it happened to be Chopin. I asked her if she’d ever played my Brahms favorite and, because of the bewildering math of the title (but mainly because I hummed it for her so badly), she couldn’t say for sure if she had or not.

Almost perfectly coincident with that, I was chatting on Facebook with my real daughter who lives in England. I told her this story and gave her a link to a performance I like. She listened to a few bars and wrote back “I love that piece!” She vividly remembered listening as a child every Sunday to a cassette given to me by my then acting partner Rosanna Ungerman. So I ordered her a copy. She is, of course, my favorite grown daughter, named (what else?) Eliza.

Here it is, because this column should always leave you with something spiritual to savor. No, really:

(Oh, I ordered a copy for myself to learn. I may never get another role like this “Pride and Prejudice” one, and I want something to do with the rest of my life. You know, to stave off dementia. Writing Backstage Graffiti doesn’t seem to be doing it.)