Representatives of The Church of Jesus Christ of Latter-day Saints addressed the role of the Church’s global humanitarian outreach efforts at a meeting at the United Nations in New York City on 27 February 2014.  The gathering was part of the Focus on Faith series of the Nongovernmental Organizations (NGO) Relations and Advocacy Section of the U.N.’s Department of Public Information (DPI). The U.N. officially recognized the Church as an NGO several years ago. 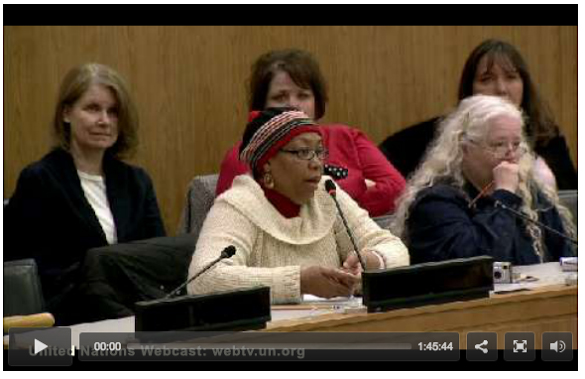 This first meeting of its kind at the U.N. dedicated exclusively to the Church was titled “Discovering Mormonism and Its Role in Humanitarian Assistance.” Those representing the Church included  Sharon Eubank, director of Humanitarian Services and LDS Charities; Ahmad Corbitt, senior manager of public affairs in New York; and Elder Phil Colton, who, along with his wife, Barbara, is serving as a public affairs missionary interacting with the U.N.

Eubank told a story of how Dutch potatoes were sent to Germany in November 1947 following World War II, even though bitter feelings existed between the peoples of Holland and Germany. “Mormon potato patches sprang up in the backyards, road medians, vacant lots and former flower gardens,” she said. The warehouse soon held 70 tons of potatoes, five times what the export permit of the expected 15 tons would allow. “It’s one thing to talk about brotherhood. It’s another thing to actually act like brothers.”

“Charity is more than aid,” explained Eubank. She said the example of the Dutch potato story “creates some foundational planks in the platform of LDS Charities. It emphasizes dignity, human worth, cooperation, unity, sacrifice and the assurance that no one is too poor or too disabled or too marginalized to contribute something of value.” She highlighted some of the projects of today, including hygiene kit production in Jordan, peer group mobility training in Nepal and family nutrition in the Democratic Republic of the Congo.

The primary purpose of LDS Charities is to relieve suffering, foster self-reliance and provide opportunities for service for families of all nationalities and religions. Eubank said the organization is self-funded from donations, with most of those contributions less than $50 each. She said the “unique approach” relies mostly on volunteers. There are 36 paid employees, including 16 staff members in Salt Lake City and 20 others in 16 area offices in major cities of Argentina, South Africa, Germany, Russia, Jordan (administered in Salt Lake City), Philippines, Japan, New Zealand, Peru, Guatemala, China, Mexico, Brazil and the Dominican Republic.

“We work with lots and lots of partners,” said Eubank. She mentioned organizations such as Rotary International, Islamic Relief, Catholic Relief Services, World Health Organization, U.N. High Commission for Refugees and others.

This is wonderful that the UN has recognized our Church. I feel we need to make it more known within the Latino population. Especially areas like Arizona where we need to emphasize teaching self reliance. I know of people that have come here and expect a hand out not a hand up.