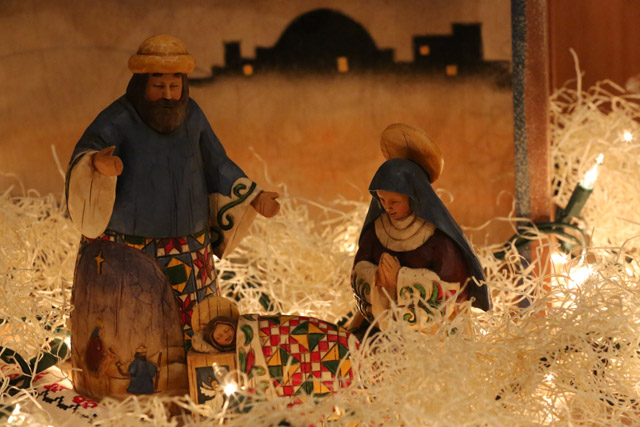 We have collected international nativities for many years. I love them because each culture paints the traditional scene of Mary, Joseph, the babe and all who come to see Him through their own eyes.

With the children who frequent our home, I watch carefully to make sure none of the pieces get broken or lost, but I’ve learned one thing. If ever a piece of the nativity goes missing, it is always the baby Jesus.

And one thing is certain, if baby Jesus is gone, however many other figures are present, the whole scene is for nothing. Shepherds may kneel, wise men bring presents, a variety of animals from chickens to lambs to cattle, may be present, but without the baby, the scene is sadly empty.

One year, a baby Jesus was missing and I searched in every hidden spot in the house to find him. Finally, I walked into my little girl’s room where she was napping. In her clutched hand, I found the missing baby Jesus. She’d taken him with her to sleep.

I’ve found baby Jesus dropped by children into pots. I’ve found him under chairs and couches, and I’ve always thought it ironic. Why is it always the baby Jesus that is slipped away from the scene, leaving that gaping hole behind?

Baby Jesus is slipping out of the scene in our nation, however, for other reasons, none of them so innocent as a child stealing him away. Like the nativity scenes, there may be so many other things that catch your eye and consume your interest that, at first glance you don’t notice that the manger is empty, that the center is not holding. You may, instead, be bedazzled by the intricacy or beauty of the other figures, the lights that twinkle.

Yet, notice it or not, systematically, and sometimes subtly, God is being removed from our culture and our sensibilities. With what we understand from the Book of Mormon about how important it is that Jesus Christ is the God of this land (See 2 Nephi 1:5-11) and the removal of His protection if He is not, no one should be more alarmed than Latter-day Saints to watch the methodical removal of God from our lives and the contraction of religious liberty.

We can no longer assume that religious liberty is a given or that others value it as highly as we do.

The Obamacare HHS mandates require businesses to provide potentially life-terminating drugs and devices in some employee insurance plans despite the religious and moral concerns of the employers. This puts some employers in the position of violating their conscience and most important religious understandings to comply with government demands.

For many, the government is requiring them to do something that they consider to be morally wrong.

More than 84 lawsuits challenging the HHS mandates have been filed, citing them as a blow to religious freedom and the right for people to operate their businesses as their conscience demands. Yet, when the business owners stick up for religious freedoms to which they have always been entitled in the Constitution, the media smears them as trying to oppress women or deny them basic contraception. Worse, the government can use its force-which, of course, includes the right to punish-to demand compliance as it did with Hobby Lobby when it slapped a daily fine per employee unless the company gave in.

Hobby Lobby is a solely family-owned business, so it is clear that this mandate strikes them very personally.

Last week the Supreme Court announced that it would take Sebelius v Hobby Lobby Stores Inc., a landmark case about the Constitutional guarantees that allow business owners to operate their family companies without violating their deeply-held religious convictions.

David Green, founder and CEO of Hobby Lobby said, “This legal challenge has always remained about one thing and one thing only: the right of our family businesses to live out our sincere and deeply-held religious convictions as guaranteed by the law and the Constitution. Business owners should not have to choose between violating their faith and violating the law.”

We, are, in fact, seeing a consistent disregard of our first freedom. Since 2010, political observers have been raising a red flag about a term both President Barack Obama and Hilary Clinton regularly use in the diplomatic and political arena. In the place of “religious freedom,” they and others in the administration have been using the term “freedom to worship.”

Language matters in defining freedoms and limits. As Ashley Samuelson, the International Programs Director for the Becket Fund for Religious Liberty wrote, this linguistic shift is troubling: “The reason is simple. Any person of faith knows that religious exercise is about a lot more than freedom of worship. It’s about the right to dress according to one’s religious dictates, to preach openly, to evangelize, to engage in the public square. Everyone knows that religious Jews keep kosher, religious Quakers don’t go to war, and religious Muslim women wear headscarves-yet “freedom of worship” would protect none of these acts of faith.”

Randy Sly, writing for Catholic Online adds, “A shift from freedom of religion to freedom of worship moves the dialog from the world stage into the physical confines of a church, temple, synagogue or mosque. Such limitations can unleash an unbridled initiative that we have only experienced in a mild way through actions determined to remove of roadside crosses, wearing of religious t-shirts and pro-life pins as well as any initiatives of evangelization. It also could exclude our right to raise our children in our faith, the right to religious education, literature or media, the right to raise funds or organize charitable activities and the right to express religious beliefs in the normal discourse of life…

“As we can see, the practice of religion permeates the very fabric of our lives. It cannot and should not be separated into approved and non-approved expressions.” The term “freedom of worship” can be seen as an effort to shrink religion into only a private sphere. It suggests that you can worship in the confines of your home or your church, but may be slapped for the implications of your beliefs in the public arena.

Knox Thames, director of the U.S. Commission on International Religious Freedom, a body created by Congress to monitor religious freedom abroad, says that he sees this change in lingo as no accident. He wrote, “Religious freedom is one of those unique rights that, to be fully enjoyed, other rights like association and speech must also be protected. Words matter, and so it’s unclear whether this new phraseology represents a change in policy. Hopefully this language only reflects speech writers trying to create good prose and not a shift in policy, as it would mean a much narrower view of the right.”

During the government shut down Fr. Ray Leonard arrived at the base chapel on Kings Bay Naval Submarine Base to an unwelcome shock.

The doors were locked, sending a message to all of the Catholic military personnel and their families, according to Mary Rice Hasson. “Shutdown: No Catholic service till further notice.”

She wrote, “Consider how the First Amendment is being sliced and diced during the shutdown. Catholics are not allowed to attend Sunday Mass, in their own Church with their own volunteer-priest, on a military base, because of the shutdown. (It’s only freedom of religion, after all.) But liberals are allowed to rally for immigration reform on the otherwise-closed National Mall, in spite of the shutdown. (It’s freedom of speech, after all!) When Park Service spokesman Michael Litterst explained that “groups will be granted access to the park for First Amendment activities,” what he really meant was that, for the Obama Administration, the First Amendment’ means free speech and assembly,’ but not freedom of religion.’

“Fr. Leonard, who spent ten years in China and experienced that government’s hostility towards religion, sees troubling parallels. This is our church. Catholics have an expectation and obligation to attend Mass and we were told, no, you can’t go to church this week’…My parishioners were upset.  They were angry and dismayed.  They couldn’t believe that in America they’d be denied access to Mass by the government.'”

Then, of course, there’s the brouhaha around Barack Obama’s recitation of the Gettysburg Address made by filmmaker Ken Burns. The President read these lines from Abraham Lincoln’s famous speech: “resolve that these dead shall not have died in vain-that this nation, under God, shall have a new birth of freedom-and that government of the people, by the people, for the people, shall not perish from the earth.” The problem? He left out the words “under God.” You can see that video with the “under God” omission here.

With the resulting concern Ken Burns, quickly explained that there are at least five versions of the Gettysburg Address, and he gave President Obama a version without “under God” in it. The “under God” version is what is chiseled on the national monument, it is the Associated Press version, and the other famous faces who recorded the address included “under God”, but somehow this was not included in the version the President gave.

In the avalanche of “he said” and “she said” surrounding this event, nobody may ever know if this was an intentional oversight, an accidental or purposeful revision of history. What interests me most about this is that unless you knew the Gettysburg Address well, you may not have noticed that a reference to God had been slipped out. It had happened so seamlessly.

That is also the way with the contraction of religious freedom. Rights don’t vanish immediately. They slip away piece by piece. Unless you pay attention, religious freedom may become a mere subset to other ideas deemed more important. God may vanish from our public discourse. We as a nation may become like the innkeepers of old and say, “There is no room in the inn.”

I too collect nativities, some 300 now. Over the years as I've displayed them publicly, always a baby Jesus or two will disappear. Now, until I can purchase a suitable replacement, I tell folks who ask, "Where is the Baby Jesus?" I smile and reply, "Oh this is a Jewish nativity. They are still waiting for the savior." It always gets a smile. I fact, I have two extra's I bought while in Israel last year, just waiting to 'come'. What better testimony to leave our children and grandchildren than to collect Nativities? I do it because I believe Jesus IS who he says he is!

I am always thrilled when national TV stations continue to air "A Charlie Brown Christmas" in the Christmas program lineup. We watched it again as a family this year. Linus' speech about the meaning of Christmas is straight out of the book of Luke. Although things on TV have become less focused on Christ, they still exist and we should bombard the stations with our positive feedback when they choose to air such uplifting programming.