I’m reviewing the Sundance darling Austenland today. This film has Mormon fingerprints all over it. Shannon Hale, who wrote the novel and co-wrote the screenplay, is a member of The Church of Jesus Christ of Latter-day Saints, as is co-writer and director Jerusha Hess (Napoleon Dynamite, Nacho Libre) and producer Stephanie Meyer. Also, lead actress Keri Russell was raised in the Church (she was in my stake growing up). Does the film cut the mustard for Austen fans? Will it be enjoyed by average movie-goers? Read on to find out! 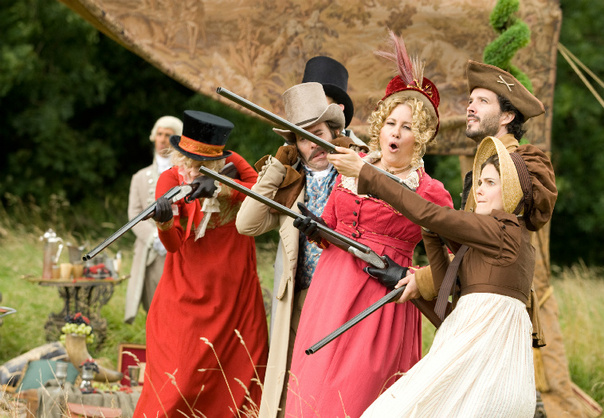 I’m going to go against the mainstream critics here, because while Austenland has only a 35% ranking at Rotten Tomatoes, I laughed all the way through, loved the characters, and was charmed by the love stories. I’ll go so far as to say it’s the best comedy of the year so far, and the best romantic comedy since 2006’s Penelope. Keri Russell (August Rush, Mission Impossible III) stars as a lonely 30-something whose obsession with Jane Austen novels and films has seriously impeded her love life. She spends her life savings to travel to “Austenland,” a resort in England that aims to re-create the time period of the author’s books, giving clients a fabricated role-play romantic experience with their own Mr. Darcy.

To say more would be to spoil the surprises of the story, but suffice to say that the screenplay pays clever homage to the tropes of Jane Austen novels as it lightly, but lovingly, pokes fun at them. Better still, one doesn’t have to be a fan of the author to adore the film. Heck, even alpha males will find much to enjoy here. The film is well structured: nearly every scene either advances the story or contains a solid belly laugh. The cast (including Jane Seymour of Somewhere in Time, James Callis of Battlestar Galactica and One Night with the King, Brett McKenzie of The Hobbit, and scene-stealer Jennifer Coolidge of Legally Blonde) is excellent, and the humor ranges from delightfully silly to bitingly smart and clever. Best of all, unlike most comedies (which run out of steam towards the end), Austenland just gets better as it goes. This is a film for which the trailers don’t do it justice. Perfect for a date night or girls’ night out. 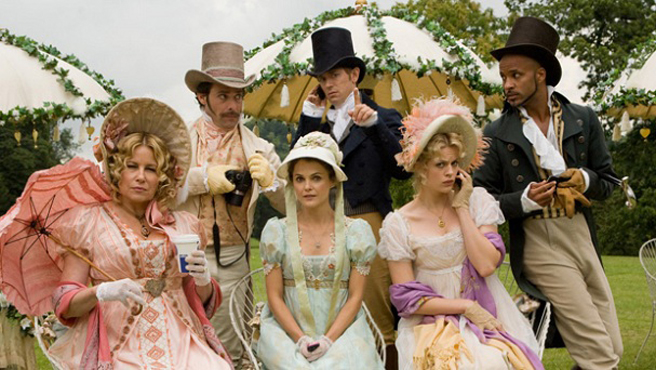 CONTENT OVERVIEW: Austenland is rated PG-13, but it’s a mild PG-13 (as a reference, it’s comparable to 13 Going on 30 or Just Like Heaven). There is no foul language or sex. There are a few mild-to-moderate innuendos, but nothing too over-the-top. A chiseled male actor keeps finding excuses to take his shirt off and at one point passionately kisses a woman against a wall, but both of these are played for laughs. A man tries to assault a woman, but she throws him on the floor and makes sure he answers for his actions. There are a few instances of slapstick violence.

MESSAGES TO DISCUSS: “True love is not so much a matter of romance as it is a matter of anxious concern for the well-being of one’s companion” (President Gordon B. Hinckley). All secrets come to light sooner or later (Luke 8:17).

Jonathan Decker is a licensed marriage and family therapist (www.jdeckertherapy.com). He hosts a segment on classic and overlooked movies on The KJZZ Movie Show on KJZZ-TV in Utah. Jonathan writes Hollywood reviews from an LDS perspective at www.mormonmovieguy.com. His book, 250 Great Movies for Latter-day Families is now available (read Erin McBride’s review of the book here). Jonathan will be having a book signing this weekend (Saturday, September 14) at the Mesa Temple Deseret Book from 6:00-8:00 p.m. 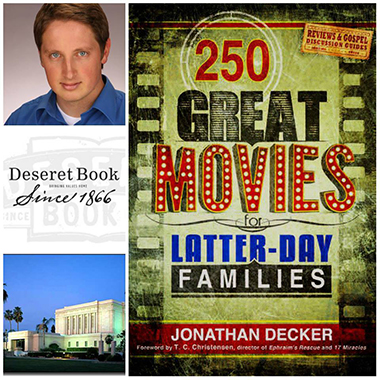 I saw this with my wife, and would have enjoyed it much more if it had been cleaner. No reason to have all the innuendo and crass humor, and especially sad to see that a group of LDS women would have created that just to appeal to the mainstream crowd more (presumably). Because of the content I would never feel comfortable recommending it to anyone.

I have to agree with Kristen and Chris. I wanted to love it. But the content referred to was so distracting and unnecessary. Why do we call this LDS-made if it crosses the ideals that we are hoping to stand for?