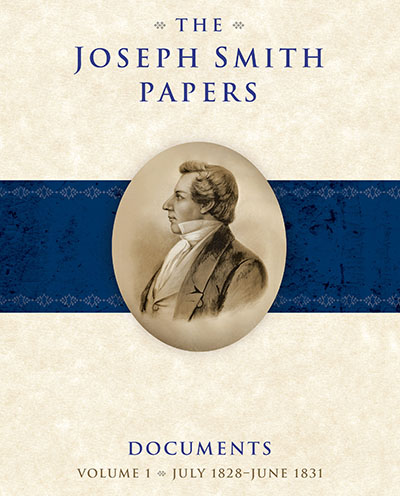 Of any religious founder, no ones origins, letters, journals, notes and history have been documented like Joseph Smith’s have been in the Joseph Smith Papers Project-a work that has been in process for more than 14 years.

Anyone who would said that the Church has held back any information on Joseph Smith would be hard pressed to stand by that claim in the face of this prodigious effort to gather every scrap of information and original document and publish them to make them accessible for the world.

The first of the 10-volume Documents series of the Joseph Smith Papers was published this week, with the second due out in December. This is the eighth book published in the Papers project with the others being volumes of Histories, Journals, Revelations and Translations.

The Document series is the core series which presents with historical introductions and annotation most of the extant (or surviving) documents owned, created, or authorized by Smith. The only documents not in this book from this time period are found in other Joseph Smith Project volumes.

Historians and advisers for the Papers project have collected thousands of documents related to the life and work of Joseph Smith. Due to the limitations of printing, not all of the available documents will be included in the books, but all materials will be available for free on the project’s website, josephsmithpapers.org.

As Richard E. Turley, Jr., Assistant Church Historian said, “We are laying it all out. In these volumes you get Joseph Smith straight up.” 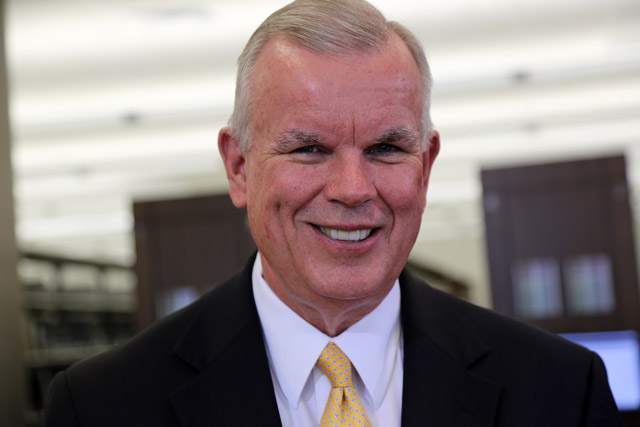 “This new Documents series will publish, in chronological order, all the early historical documents associated with the Restoration of the Church,” said Elder Steven E. Snow, Church historian and recorder. “Together, these texts provide unparalleled insight into the life and prophetic thought of Joseph Smith, one of the most important figures in American religious history.”

The 640-page book, Documents, Volume 1: July 1828-June 1831, features Joseph Smith’s earliest surviving papers, including more than 60 of his revelations, most of which were later canonized in the Doctrine and Covenants. Also included are letters he sent and received, minutes of meetings he participated in, and other documents. This volume covers a foundational period of Mormon history, when Joseph Smith translated and published the Book of Mormon and organized the Church. Documents, Volume 1 will arrive in bookstores within the next few weeks. 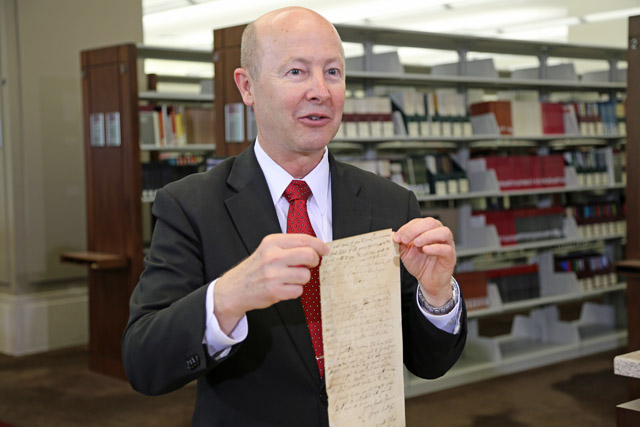 Turley said the documents in the series provide a candid look at Joseph Smith.

“This set of documents allows you to see, without any intervening filter, what Joseph Smith produced,” Turley said. “It’s an excellent way to understand Joseph Smith and his life, because it gives you the pertinent documents, and it gives them to you in a chronological order, so you can see what comes before and after.

“As I have studied these documents I continue to be impressed by the complexity of his life. He was a husband, father, business man, prophetic leader, community builder. Reading these documents, it becomes even more clear what a fascinating and marvelous leader he was,” Turley said.

The papers published in this Documents series are largely from the Church’s own archives and were carried across the plains when the pioneers came, but they also include documents that are in the possession of The Community of Christ as well as papers that are in the hands of private collectors. It has been a scouring effort to find them all. 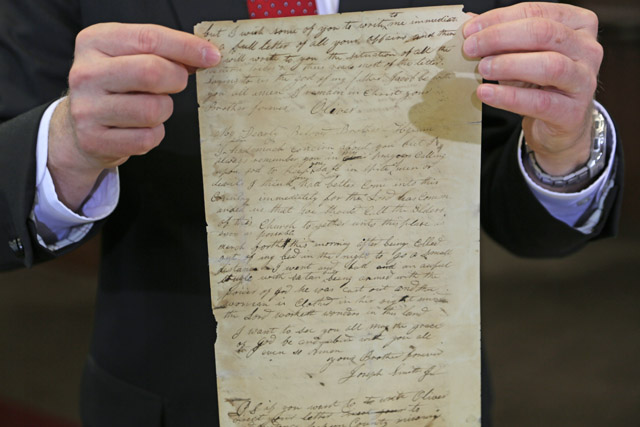 This first volume contains the earliest documents that have been found penned in Joseph Smith’s own hand. Turley held up for instance, a letter to Hyrum from Kirtland, Ohio, dated from 1831 which was the earliest document in Joseph Smith’s own handwriting. It was about Joseph’s effort to regulate the Church in Ohio, explaining that the devil had made attempts to overthrow them. 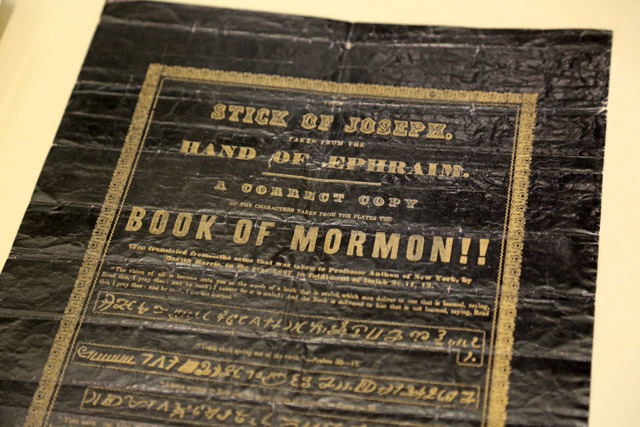 This volume also includes a broadside (poster) of the first known publication of characters that may have been copied from the gold plates. Editors of the Prophet, a Mormon newspaper published in New York, produced this after Joseph Smith’s death I 1844.

The introduction to the volume notes, “At the outset Joseph Smith wrote very little. His family were not writers. He and many of his peers read comfortably but were less practiced and perhaps less at ease expressing themselves in writing. While he was clearly literate, no specimen of his handwriting created before 1829 is extant.

“Even as a mature adult, Smith noted ongoing frustration with the limitations of writing. In a 6 June 1832 letter to his wife Emma he wrote, I hope you will excuse . . . my inability in convaying my ideas in writing.’

“Nonetheless, beginning in 1827 at age twenty-one, he produced extensive texts given him, he said, by the gift and power of God.’ In practice this meant dictation rather than writing in his own hand, and in this mode he was prolific. Not only did he dictate to scribes the more-than-500–page text of the Book of Mormon, beginning in the summer of 1828, he also dictated hundreds of pages of revelatory texts in the voice of God.”

From the beginning of the Church’s organization, however, Joseph Smith had a keen sense that a history should be kept. When there was still only a First and Second Elder (Joseph Smith and Oliver Cowdery), John Whitmer was assigned to be the Church historian, following the commandment to keep a record. 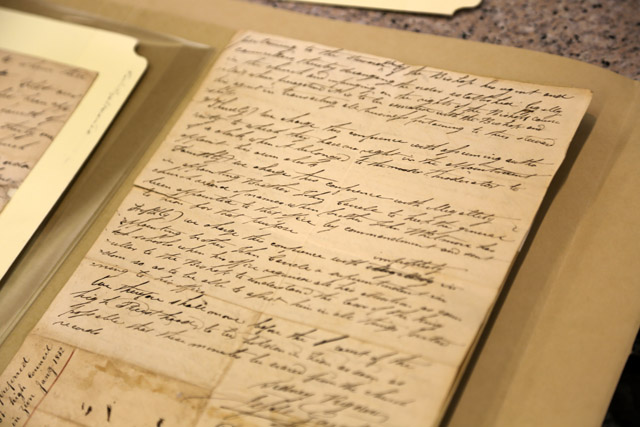 Joseph Smith wrote letters at least as early as 1829, but little of this correspondence has survived. Some early letters have survived because they were copied into bound books as early as 1832 and others survived in the possession of the receiver and were donated decades later to the Church Historian’s office.

In looking forward to the Document volumes to come it is clear that in some periods of Joseph Smith’s life there are more documents than in others. During the 1837, bank failure in Kirtland, for example, Joseph Smith kept no journal and sent few letters.

On the other hand, he sent more letters in the first six months of 1844 than in any other previous full year of his life. From December 1841 to the end of his life in June 1844, he had the same number of entries as in all his other journals combined.

Still the extant correspondence of Joseph Smith is not voluminous when compared with other prominent figures of the nineteenth century. Letters sent number only about 305 and those received about 430, most of which will be published in later volumes.

The revelations provide an essential framework for understanding Joseph Smith and the movement he led.

Kenneth Minkema, director of the Jonathan Edwards Center at Yale Divinity School, has said that the Joseph Smith Papers “will rank among the most significant projects in the history of American religion.”

The print edition of The Joseph Smith Papers is expected to span at least 21 volumes when complete, divided into five series: Journals, Revelations and Translations, Histories, Documents and Legal and Business Records.

The Documents portion of the series will comprise about half of the total volume count. Documents, Volume 2 is scheduled for release in early December 2013 and includes documents from July 1831 through January 1833.

As researchers have combed through the documents, new information has emerged about the life of Joseph Smith and the early years of the Church. Details about Church organization and doctrine and facts about Joseph Smith’s ministry, business dealings, personal life and legal challenges came forth in the research.

The Papers project has been endorsed by the National Historical Publications and Records Commission (NHPRC), a division of the National Archives. The commission approves qualified documentary editing projects, including collections of the papers and writings of George Washington, Thomas Jefferson and others. In order to obtain the NHPRC’s endorsement, researchers had to comply with strict guidelines, including a review of the project’s schedule, funding and editors. The Joseph Smith Papers volumes undergo extensive peer reviews, from both within and without the Church.

this is amazing and wonderful