Finding Out Your Key Family Values

A researcher studied the Lucy Mack/Joseph Smith Sr. family to learn what their effective, family traits where.

This is the fourth article in a series on the trans-veil family. Though each article stands alone to some degree, none is complete without the others: 1) The Enabling Power and Ministering Angels ;  2) Family Reunions – Vital Whys ; 3) Family Reunions – Practical Hows  .

We were gathered for some family fun. It was game time but, by design, the game, more than amuse, would change outlooks and perspectives of our family members. Each person was given a slip of paper to defend. On each slip was a word: lights, indoor-running-water, indoor bathroom, electricity, heater, stove, refrigerator, etc. All were then informed that there had been an earthquake and one of the items would be permanently lost. There was lively debate as each person defended his or her item. Once the successive disaster and ensuing discussions were finished and preferences had narrowed, only one item remained – electricity.

This process and discussion was followed with more slips: mother, father, bishop, uncles, aunts, cousins, brothers, sisters, etc. Then again with more: eyesight, hearing, touch, walking, use of arms, use of hands, etc.

Each round included the item, person, and finally the value left from the previous round. Without exception the preferred item or person became among the first to be eliminated with the introduction of new items, which became increasingly personal and value oriented. When we were done defending, agreeing, voting, etc. we had each clarified what was most important by imagining what life would be like without it as compared to others of life’s puzzle pieces. In reality, life’s experiences and adversities give us this same opportunity until we live according to what we value most.

So, what is a value? The Webster’s on-line dictionary includes:

…past participle of Latin val?re to be of worth, be strong.

7: something (as a principle or quality) intrinsically valuable or desirable…

What causes one thing to be valued or valuable and part of our lifestyle, and other, seemingly desirable things, unvalued? Some things are so valued that we are willing to change behavior or forego opportunities to adhere to them. Things that may seem of value to some are passed over by others as worthless, either by decision or ignorance. For example the principle of honesty would motivate one person to forego opportunities to personally profit, while another would gladly cheat, steal, etc. in order to gain. Is it perspective or training, tradition or understanding that gives things or principles their value?

The cheater, for example, might happily get paid more than something is worth, only later to find that he has lost a customer. He may find that he is always suspicious of others and consequently has created an internal culture of non-trust amongst his relations and contacts. Perhaps you want some benefits enjoyed by an acquaintance, but if you don’t see or understand the connection between the benefit and their beliefs and actions, you may be unwilling to discipline your own behavior (sacrifice other valued habits), and thus lose the desired benefit. If only you knew how to change a principle into a personal value, then it would become natural to you and the benefits would be yours for the long term.

One suggestion is to see the idea of “values” as a triangle: 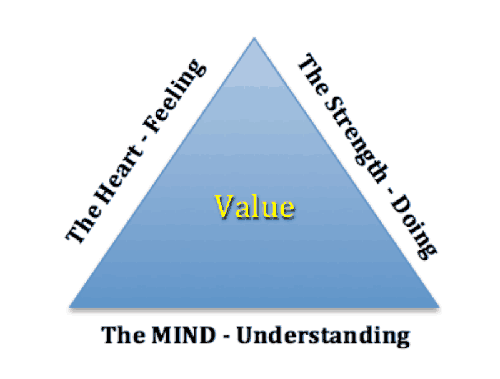 I may understand the benefits of being honest to my self and the community but if I loved immediate profit more, and thought that I could get away with cheating or stealing, I would behave according to the profit value rather than the honesty value. Later when the thrill of acquisition was past and the need for trust became pressing, then being honest could eventually change the feeling component of my triangle sufficiently enough to generate honesty as a consistent personal value.

This has been called “Values Clarification” as in the afore-mentioned game. We often gain understanding, and thus learn to love a principle, in the study or practice of behavior consistent with the value. In the effort to impart values, it has been shown that values are better caught than taught.

This planting “family values” into young hearts becomes ever more challenging as the world gains direct access to budding appetites through media and technology. That so many would directly seek profits using any means that appeal to appetite stimulation, regardless of the moral side effects, creates significant opposition. Research has repeatedly shown that adopting key family values can dramatically assist families in this vital contest for the minds and hearts of the rising generations and protect our children from the critical generational consequences. Modern family science research has identified several key common values in successful, cohesive families that, like good trees, have been judged by their fruits.

Families differ on so many levels that determining the success of one family as compared to another can seem like comparing mangoes to kiwis. But even diverse fruits can be judged by their nutritional value rather than their appearance. Though parental failure and success might be difficult to measure, there are well-studied characteristics and values, common to happy productive (measures of success) parents, children, and ensuing posterity. However, rendering a “failure judgment” also assumes that all efforts to assist family members towards becoming productive in society have ended, and that progress, or any hope of it, has ceased. Parents have not failed until they have given up, so a historical study can give valuable insights since the effects over several succeeding generations may be available.

Since family influence is not over until all has ended, a study of the fruits of a multi-generational family from historical research could be most informative. This, especially since the family studied for this article, is the first family of the last dispensation-the Joseph and Lucy Mack Smith family. Thanks to gracious permission of Dr. Kyle R. Walker, I will extract the family values he has identified in his PhD thesis available here or here. He specifically targets numerous historical accounts of this effective nineteen-century family. His doctoral thesis is entitled in “A Family Process Analysis of a Nineteenth-Century Household”. Quotations, unless otherwise noted, are taken from this thesis.

From a well-established list of examined processes, characteristics and values, Dr. Walker highlights six inter-related categories that are easily identifiable within historical records and that don’t require an interview with the family to evaluate.

On closer examination some of these could be defined as values while others seem to be strategies/behaviors used to implement the values. Perhaps that is because these values are so intertwined in creating successful families in that the behavioral aspect of one value becomes a strategy for implementing another.

It can be said for example, that a cohesive family is one that manages conflict effectively and is resilient after crises, and thereby successful. Though cohesion is itself a value, one can ask what values fuel cohesion and provide reproducible results in other families?

For example, Dr. Walker noted that those families that valued religion (internally and externally) managed conflict and were resilient to life’s crises more effectively than those who were not religious. So though religious belief is a value, it is also perhaps the “understanding-MIND” component (from the triangle) that persuades family members to sacrifice personal benefits towards resolving conflict because they are motivated by a link to higher causes (More on this later.) Likewise family unity (a value) was enhanced as the family worked and played together – both values that served as cohesive strategies that enabled unity.

Though not strategically incorporated by our early Smith family as a result of any schooling, these specific strategies can be seen today as applicable for parents seeking direction in the ongoing battle for family effectiveness. For our purposes, we will call them Smith Family Values – though they were hardly exclusive to them.

Can you give a more detailed description of each value and some practical examples of how to incorporate them into my family? Stay tuned….