I’m at FASO. (“Fathers and Sons Outing”). FASO is a necessary part of our mortal experience-so much so that more than one sonless father has brought a daughter or two simply in order to seize more of the blessings that the Restoration makes possible.

[This next paragraph was inserted later, after surviving FASO, sort of.]

These blessings were summed up well by our bishop in Fast and Testimony meeting on the day following. He reported on the small boy who woke up in the morning with a charcoal stripe on his cheek from a near miss by a burning stick, and on the archery innovations that he didn’t deign to share with the ward as a whole, and on the sudden descent from the top of a tree by one of the several boys who were flocked up there like so many starlings and about the attendant loss of blood. He opined that the features of FASO that might be essential to our salvation are the ROP (“Rite of Passage”) that it affords our boys, along with the annual object lesson of how desperately we need our mothers. [End of insertion, back to FASO.] 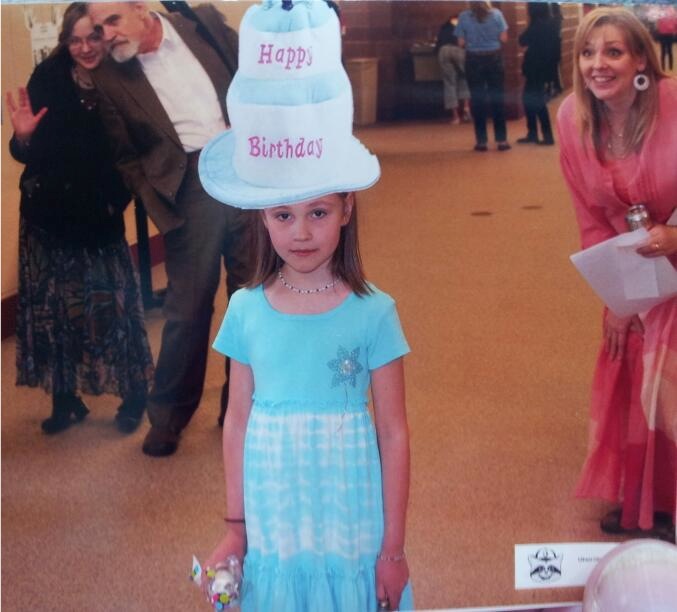 because I’ve fallen prey to FOPAFASO (“Freezing Our Pies At Fathers And Sons Outing”) Syndrome, making it utterly impossible to sleep. These are thoughts that have arisen in my mind as I’ve stared into the starry firmament. (I’m writing by the light of the flashlight app on my cell phone-at first the control screen showed only controls, then I noticed that other icons were appearing at the bottom of the screen, uninvited. I think that by now, in the mere process of shifting the phone to adjust the aim, I’ve inadvertently subscribed to several pornographic periodicals, purchased a time share in Dubai, authorized my banking information to be sent to government officials in Nigeria, and downloaded the “Pro” version of my flashlight app for $5.95 a month at the promotional beginning rate.

((Speaking of “starry firmaments,” look at the three beautiful women I get to live with! The eldest of the three who appear to be my daughters is really my wife, Laurie, who has throughout her life helped people remember how to pronounce her name by saying that it rhymes with “sorry.” I’m teaching her to say “Hi, my name is Laurie; it rhymes with “STARRY” (((“Spouse Totally Awesome, Ravishing, and Retaining Youth”))). )) ) Below are the aforementioned thoughts (See how cold my fingers are?): 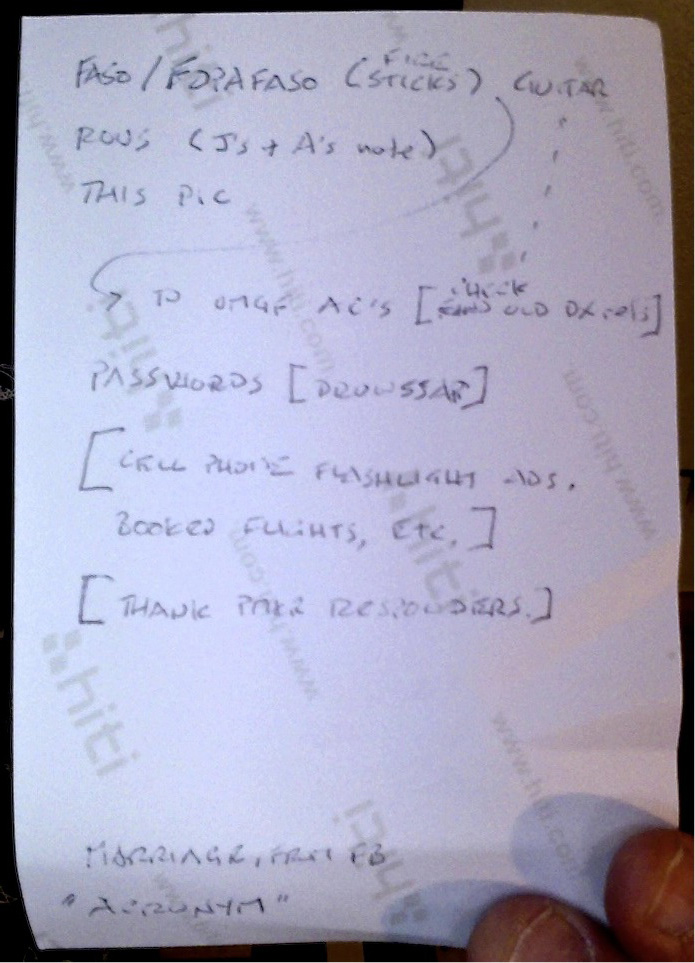 These may not look much like actual thoughts, but when I thaw, if I thaw, I’ll expand them into a column.

Later, warmer, full of sausage (my cooking of which involved an embarrassing and highly public learning curve, though only one boy actually brought his sausage back for me to work on some more):

I think the idea of acronyms came to me in the frigid night because we recently watched again our disk of “The Princess Bride,” in which appear the ROUS, an acronym that has brought me more joy than any other ever since I first encountered it on a concert tour of the Midwest and East Coast (of America) in 1976, when a film version of the story was just a gleam in no one’s eye. (If you don’t know what “ROUS” stands for, there’s a good chance that Backstage Graffiti is more or less not exactly the column for you-this column is in no way meant to be exclusive, but there are pre-requisites-think of exposure to The Princess Bride, Hitchhiker’s Guide, The Far Side, and now Studio C as “pre-requisites.” You might instead try Larry Barkdull’s column ((appears here every Wednesday)) for which the only pre-requisite is a hunger and thirst after righteousness).

(The other day my 12-year-old son wanted to arrive at school earlier than usual for some indiscernible reason and left on the table a note for us. On the top half of an 8.5 x 11 sheet of paper he wrote, “I’m at school. Love, John.” Later, when his seven-year-old sister saw it, she added on the bottom half of the sheet in her best first-grade scrawl,

“I’m at school
you killed my father
repair to die.”

((Larry’s column will give you no insights into this kind of behavior.)) )

Well, in the unlikely event that somebody might be bringing to my little column a hunger and thirst after something more substantial than a mouthful of mirth, maybe I’d better get to the acronym I most want you to remember. It’s “NAM.”

“The question I need to ask myself before ever presuming to serve somebody: Is this about me?’ I can serve so much differently, so much better, if it’s Not About Me.” Or NAM.

Serve, schmerve, anything I do will have more value if it’s NAM.

Here’s what precipitated that journal entry and really, really, overdue epiphany. I have a friend who is going through a lot of grief and self-squashing mainly because her former spouse is acting like a jerk. I know he is a Child of God and Divinity in Embryo, but he’s a Child of God and Divinity in Embryo who acts like a jerk. He will, I imagine (I hope), be pretty embarrassed when he watches this little segment of his life during the Ultimate Holographic Overview in Heaven, or UH-OH. (I’m getting most of my embarrassment out of the way right here in mortality.)

Anyway, as I eavesdropped on a phone conversation between this beleaguered friend and my wife, I wrote her an email that was intended to comfort. It was all about the vision I have of her true worth, and even included a poem (written earlier, for somebody else) that rhapsodized on her eternal potential. It was a nifty poem, and my whole gesture eloquently revealed my astounding visionary nature. And that was the problem-it was really AAM (“All About Me”). I tried to repent and sent her a subsequent note about the beauty of her friendship with my wife, her sacrifices to help her, and the obvious resilience of her faith; and I found myself wondering how many more of my attempts to lift others are really AAM. This is tough for a guy whose profession is very much a “Me” snare. Maybe the easiest way to illustrate this is to share a brief Facebook exchange between me and an artist whom I respect and admire.

He wrote “Heard a bit of this fantastic quote in LDS (“Latter Day Saint”) Conference tonight. Here is the whole thing, by Dr. Wayne W. Dyer: Don’t die with your music still inside you.

Listen to your intuitive inner voice and find what passion stirs your soul. Listen to that inner voice, and don’t get to the end of your life and say, “What if my whole life has been wrong?” “

I answered “This is probably an elaboration on Emerson’s much earlier observation that Most men die with their music still in them.’ (Dyer undoubtedly acknowledges that somewhere.) I sense a danger, though, in Dyer’s exhortation. It’s conceivable to me that someone could let all their music out, listen to their intuitive inner voice and find what passion stirs them, and still get to the end of their life and ask What if my whole life has been wrong?’ My music and my passion may turn out to be the very things that I should have sacrificed, the price I should have paid for my ticket on the train the Lord knew would take me to glory.”

Don’t know for sure.

But I know for sure that you and I should remember NAM. You don’t really have to remember FASO (but you should definitely go, perhaps wearing an arrow-proof vest and an asbestos mask), or ROP or STARRY or ROUS. (Well, maybe you should remember ROUS.) But don’t forget NAM. You’ll do better.

Of course, this is offered IMHO*, FWIW* and, as always, YMMV.*

Thanks,
Marvin Payne
Founding member of ACRONYM
(“Authors and Columnists Running Out of New Ydeas, Mostly”)