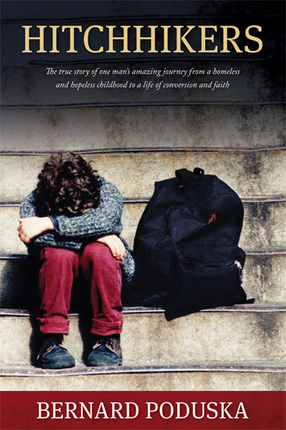 Hitchhikers by Bernard Poduska is not a novel, but reads like a novel. It struck a particular chord in me.  I moved from place to place as a child, but I always knew I was loved and that I would be cared for unlike Bernard and his sister. The book is biographical and covers two time periods in the author’s life.  The emphasis is on that period of time when he was between eight and eleven years old and is told from the framework of an all night hospital vigil as his mother is dying.

Buddy, as the author was called as a child, begins his story with a telephone call from his sister whom he hasn’t seen for years.  She informs him their mother is in the hospital and not expected to live.  During the long night in the hospital waiting room outside the intensive care unit, they talk and remember their sad childhood, their love for each other, and recognize that both God and their mother protected them during the dark days and nights of the years they spent hitchhiking from one pathetic brief stopping place to the next.

Memories of Buddy’s childhood begin with the family’s arrival in Phoenix, Arizona, following their eviction from an apartment in another town. In every town where they find themselves, their mother gets a job as a waitress while their father sometimes works at odd jobs, but mostly he drinks.  He’s a mean drunk with little concern for his family’s needs and his children often have red welts on their legs from his leather belt.  Both Buddy and his sister, Carolyn, learned to steer clear of him and to protect each other. One night when their mother accompanied their Dad on a bar hopping jaunt, the kids almost burn down the hotel where the Salvation Army found accommodations for them. This results in the children being sent to a foster home.

Buddy and Carolyn hate the foster home and all the rules they are expected to follow.  To their relief, their mother intercepts them as they walk to school one morning and hurries them away to join their Dad and the four of them begin a frantic journey to reach New Mexico and evade the police.

The family lives in terrible poverty and they often spend hungry nights in the desert or in a park beneath a pile of newspapers in a vain attempt to stay warm. Not all of the rides they accept from strangers work out well and some place them in severe danger.  Sometimes they are helped by kind, caring strangers. The money Mom earns as a waitress too often is appropriated by Dad to buy liquor.  Lies and theft are part of their life.  After a fight between his parents, Dad leaves and is gone for months.  That is when Buddy learns his Dad has another family in California and there is another Bernard Poduska, Junior.

Buddy’s education is sporadic and he is nearly illiterate. With so much suffering, he doubts there is a God.  As a young atheist he joins the military and slowly gains an education.  It isn’t until he meets his half brother and is introduced to the gospel, that his life begins to turn around.

The ending of this story is rushed and is an information dump, yet it leaves many questions unanswered.  Nevertheless this is a powerful story, one of hard-earned hope and faith, and one that leaves a lasting impression.

Bernard’s life has taken him on an incredible journey.  Though he was “functionally illiterate in high school, he went on to earn a BS, an MS, and a PhD.  Though he taught at several colleges and universities, he spent twenty-one years as an associate professor at Brigham Young University.  He married and achieved the stable family he dreamed of as a boy.

HITCHHIKERS by Bernard Poduska, published by Covenant Communications, 210 pages. Available on Amazon in paperback or for Kindle and BYU Bookstore.

Dear Bernard: I am your 3rd cousin. My grandmother was rose poduska your dad's sister. Every word in this book is true and there is much much more. I want to tell you how proud I am of you. I want to talk to you about your brother as well. There is another book about this and maybe it is to much to tell. It is worth telling. I have research your family for 20 years. I loved your book. and if I never hear from you again thanks jim. ps there is another story that goes back another generation. jim

I literally read it in two days (don