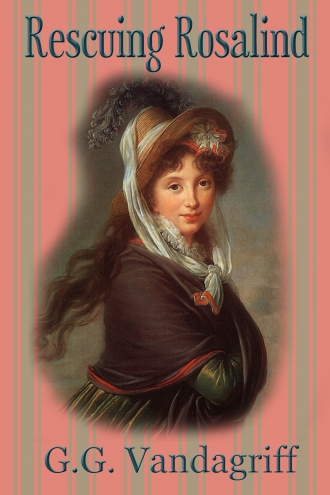 Regency novels have become popular lately with LDS readers, particularly those by LDS authors.  GG Vandagriff is one of those receiving a positive response from readers who want a clean love story filled with romance, action, and a pleasant outlook on life.  With Rescuing Rosalind she exposes the beginnings of a collective examination of the morality of a society that perpetuates an elite corps of wealthy people while keeping the vast majority of people tied to a feudal system that perpetuates poverty and hopelessness.

Captain Charles Buckingham Marquis of Deal finds a girl acting out the Gannymede role from Shakespeare’s As You Like It in his friend’s garden while taking a short leave from his ship and the French War.  He pulls off her cap releasing her long auburn curls and declares she is Rosalind not Gannymede.  She captures his fancy and three years later after the war has ended he meets her again at a society ball and is introduced to Miss Fanny Edwards.  She plunges from one scrape to another and he is always there to rescue her from social ruin.  He doesn’t see himself as her suitor, but more a friend and protector, still he is consumed with jealousy when others attempt to court her.

One escapade goes too far, calling for drastic measures to save Fanny’s reputation.  In the aftermath her sister and brother-in-law rush her out of town.  She confidently expects her captain to follow, but a duel begins a series of disasters that keep them apart.

As in all regencies there is attention given to elaborate clothing and manners, but both Fanny and the captain chafe at the strictures society places on them.  Each has suffered from parents who placed their social ambition above the needs of their children and both have worked hard to forge a measure of independence in his/her life.  The captain has lived aboard a ship since he was twelve, has traveled extensively, and doesn’t buy into the restrictive rules of the British upper class though he himself has inherited a fortune, a title, and property.  Fanny along with her younger sister, were rescued from a life of physical and mental abuse by their older sister and her titled husband.  She longs to be truly free and to be able to give free rein to her talent for drama.  She’s impulsive and frequently acts before thinking through the consequences.  Class restrictions that keep the rich wealthy at the expense of the poor don’t sit well with her.  The unemployment and poverty of soldiers and sailors returning from the war is equally disheartening to the captain. Both tend to follow their instincts to help those they care about which frequently lands them in trouble.

Vandagriff has created an interesting cast of characters readers will enjoy getting to know.  The plot follows the standard form for a Regency Novel, yet contains some delightful variations.  Though the time period is prior to the restoration of the gospel and the story really can’t be considered an LDS novel, it will appeal to many LDS readers because of the main characters’ concern for the welfare of others, of their desire for personal agency, and their commitment to moral right over social mores and pressures.  I found the story an enjoyable read, but was disappointed that the cover art, doesn’t live up to the exciting, vivacious young woman Rosalind (Fanny) proved to be. The piece is an excellent painting; it just doesn’t fit the character.

GG Vandagriff attended Stanford University and received her Master’s degree from George Washington University.  She and her husband have lived many places, but currently make their home in Utah.  They have three children and three grandchildren.  She writes in several genres and has received awards for The Last Waltz and The Only Way to Paradise.  She is also a regular contributor to Meridian Magazine.

RESCUING ROSALIND by GG Vandagriff, published by Orson Whitney Press, is available from Amazon in paperback $7.99, and e-book $2.99, 210 pages.