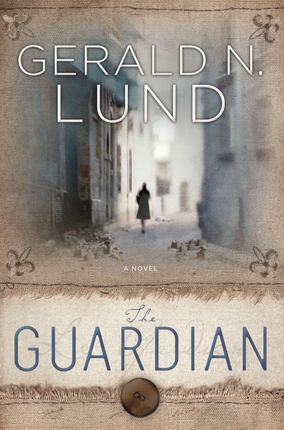 Gerald N. Lund’s new book, The Guardian, is not quite like anything we’ve seen from him before, not even those early books before he launched into The Work and The Glory series. This one began as a fantasy bedtime story he told his children when they were small. It grew as they did, then was forgotten for many years, before being brought to life again as a tale for teenagers, complete with today’s youth’s obsession with magic. More importantly, it’s a tale of four important things to remember.

Caruthers, better known as Danni, receives a strange gift from her grandfather on her thirteenth birthday. A two hundred-year-old purse made from folded canvas with a rope handle and faded embroidery on the front doesn’t seem too impressive. The card inside touches her unexpectedly. It’s called The Four Remembers of Life and includes four points.

“Number one, Remember, you are unique.

“Number two, Remember, there is a purpose to your life.

“Number three, Remember you are free to choose what you are and what you become.

“Number four, Remember, you are not alone.”

Life goes along quite normally for a small town teenage girl and her best friend for three years and she seldom thinks about the pouch her grandfather gave her, then right after her father and grandfather share with her and her best friend, Ricky, their discovery of a rare Rhodium vein in an old mine she learns the pouch has special qualities she doesn’t know how to use or control. She and her family are kidnapped by a ruthless gang of international con artists who demand the money her father is to receive for the sale of the Rhodium mine. Through the powers of the pouch Danni and her little brother are able to escape and make their way to Ricky and his father, but in this age of GPS and other electronic methods of tracing, how safe are they? And for how long? Will contacting law enforcement make matters better or worse for her family?

Danni has a hot temper. She’s a tomboy, and extremely stubborn and competitive and more than a little mouthy. Through the pouch she learns some painful truths about herself and makes real efforts toward being more mature. She also develops a deep appreciation for not only her immediate family, but for her ancestors. Perhaps most importantly, she learns about her own capabilities and potential.

I’ve read a lot of books that were ruined by flashbacks. This one isn’t, though there are quite a few instances where the story flashes back to previous owners of the bag. Each of these flashbacks is positioned well, important to the story, and fascinating.

Though the story carries some strong messages, it is an exciting and challenging mystery that will keep readers staying up late to read “just one more chapter.” The story builds in a satisfying way with some problems resolved along the way, yet each resolution seems to open almost immediately into a bigger problem. Though the enchanted purse is a fun touch, to me its inclusion seemed to say luck and magic are fun fantasies and can come in handy, but don’t count on them. In spite of the protagonists in this story being sixteen and seventeen through most of the story, the author’s name alone will invite many adult readers. The mystical properties of the bag are used well and in a sense are symbolic of the unknown depths within each person. I recommend The Guardian to those who enjoy a touch of magic and to the more pragmatic readers both young and old.

Elder Gerald N. Lund received his MS degree from Brigham Young University. He served for thirty-five years in the Church Educational System. Most recently he served as a member of the Second Quorum of the Seventy. He has written a large number of books, but is probably best known for The Work and the Glory series. He and his wife are the parents of seven children.