You Have a Prophet? What Does He Say? | Meridian Magazine

You Have a Prophet? What Does He Say? 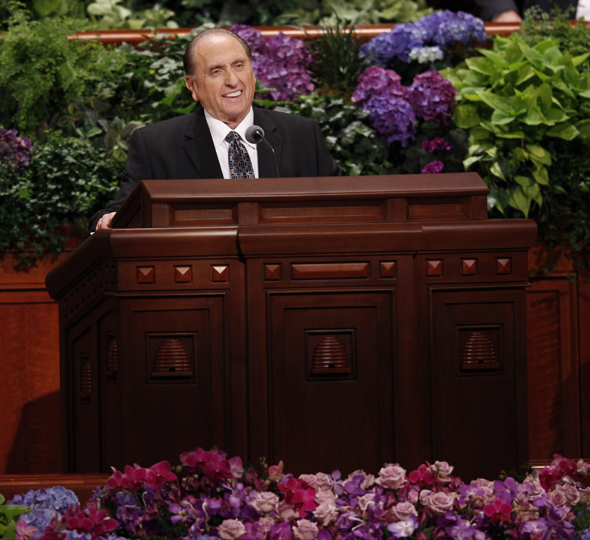 Not long ago I was talking with a woman who told me an interesting story. She had struck up a conversation with a complete stranger, had somehow mentioned that she was a Mormon, and the person had seemed curious. He asked about her beliefs and she explained, among other things, that we have a living prophet who gets inspiration from God for this church.

Well, the man was thunderstruck. “You have a living prophet?” he gasped. “Well, what does he say?” And, with moist eyes, the woman confessed that she didn’t exactly know.

“How can you not know?” the man asked. “You claim to have a prophet, yet you don’t know what he says?”

Nope. She was one of those members who doesn’t really listen to Conference or read the Ensign magazine. She had considered herself active, but wasn’t current in keeping up with the prophet’s latest messages. In short, she wasn’t taking him seriously. She had lost her grip on how amazing and thrilling it is to actually have a living prophet today. Yes, she knew he was the president, but the prophet part had dwindled from her mind.

If we don’t find this news exciting, how can we expect others to do so?

From that day on, of course, she has hung on every word our leaders speak, and wouldn’t miss a single conference or other broadcast from headquarters. She vowed she would never again look so hypocritical, so ungrateful.

A prophet not only can prophecy, but give prophetic counsel and warnings. I might add that those who look for magical, fortune-telling kinds of examples, miss the point. A prophet’s call is not to entertain or get people to gasp when they realize his prediction came true. Such things, like signs, amuse folks for awhile but do not truly convert anyone. Instead, a real witness of truth will come from the Holy Ghost, will penetrate our hearts, and will leave an indelible conviction of Christ and His restored gospel. You have to humble yourself and pray to get that one, not just gather on a street corner and hope a magician will come by.

However, having said that, our prophets have made astonishing statements that confirm existing faith.   The list is exhaustive. Thirty years before it came to pass, Joseph Smith prophesied the Civil War-and that it would begin in South Carolina. He predicted the year when the saints would escape their enemies, and that they would flourish in the Rocky Mountains. He foretold Stephen A. Douglas’ run for the presidency, a host of predictions about church growth and missionary work, and even his own death, among many other prophecies.

Even today you can get chill bumps reading Thomas S. Monson’s warnings about debt and home equity loans, right before the crash and recession we now see. Likewise we can read The Family: A Proclamation to the World from 1995, and see how precisely it addressed the impending crises swirling around us today-disintegration of the family, blurred roles, neglected children, disregard for eternal gender identity, denied sanctity of life, plummeting moral standards, and other social ills. When the Proclamation first came out, many of us thought it stated the obvious. Who could question the family unit? Today we see how few people accept such ideals and don’t see them as obvious at all. And this vital, important document has guided members to fight for sacred truths as they have come under virulent political attacks that no one could have predicted 20 years ago.

But it isn’t just about predictions. Prophets guide, warn, and inspire us in countless other ways that help us live a life of spiritual abundance and joy. They speak to our hearts and souls, lovingly trying to help us come closer to Christ and eventually to live with Him again. Theirs is a mission of Search and Rescue, not Dazzle and Amaze. They relay to us the counsel God would have us hear, helping us repent, make course corrections, and humbly come unto Him. If nothing is to be gained by predicting an event, why make the prediction-just to impress nonbelievers? That’s not God’s style. He will inspire a prophesy if it can make a difference in our actions and choices, but not just so we can say, “Wow-that actually happened. Cool.”

And so what can you remember from the last General Conference? Quick-before it comes out in the Ensign, would you be able to tell someone our Prophet’s latest counsel? Did you perk up and really listen when he spoke? The apostles are also prophets-what did they advise us to do? We are blessed beyond measure to have mouthpieces of God who regularly address us, and let us know His will. No other faith can claim this direct authority.

To neglect such counsel would seem quite serious. To turn away rather than tune in and listen puts us in that hypocritical camp of people who know better, and just don’t care. Worse, to know the counsel and not heed it puts us in a state of rebellion that’s hard to justify, not only to a stranger, but to God.

“You mean they tell you to store emergency supplies but you don’t have any?” “You’re supposed to search for your ancestors but you never do?” What other questions might onlookers have, once they know the richness of the guidance we have? Of course none of us comply completely with every admonition or commandment; we have weaknesses and temptations the same as anyone else. But we should know the counsel and be striving valiantly to keep it. That much we should be able to claim to anyone who inquires– A steady, committed heart, a testimony that brings us joy, a demonstrated faith in leaders called of God, and a heaven that is definitely open.