One of the Best Conversion Stories Written | Meridian Magazine

One of the Best Conversion Stories Written 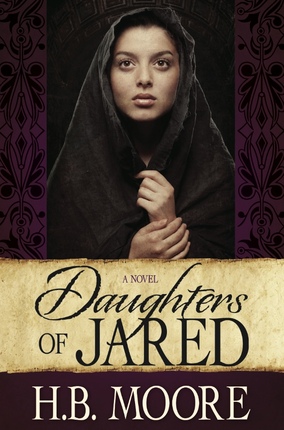 “Heather Moore, writing as H.B. Moore presents one of the best conversion stories I’ve ever read with the Daughters of Jared. The conversion is so subtle as Naiva struggles with the concept of deity and faith, the reader is almost unaware the groundwork is being laid. Naiva is stubborn, loyal, exasperating, often makes foolish choices, has a huge capacity for love, has deep rooted insecurities and low self-esteem, is intelligent, and has a strong desire to do right. In short, she is achingly real and stirs a strong identity factor in the reader. She finds herself in terrifying, but believable danger. Though Moore bases her story on a short episode in The Book of Mormon and stays true to the few details given in the scriptures, her fictional enhancement feels alive and real.”

The scriptures tell us little of Jared a descendent of the Jared who traveled with his brother to the promised land following the confusion of languages in the Old Testament. He’s not a good man and violently wrenches the kingdom from his father. His father, Omer, lives in exile and has other children, who reclaim the throne for their father. Omer spares his son’s life when the kingdom is retaken, but Jared never stops coveting the throne. One of Jared’s daughters schemes with him to kill Omer and once more rule the kingdom. They recruit Akish to their side and he resorts to an ancient secret combination to claim the throne for himself. We know little more of Akish other than that he married one of Jared’s daughter and he later became jealous of one of his sons, imprisoned him, and starved him to death to keep him from being a rival for the throne.

Moore tells the story from the perspective of the daughter who married Akish and her sister, Naiva, who are caught up in the power struggle. Asherah, the older sister, will do almost anything to obtain power, be admired, and be queen. Naiva has a deep commitment to family and loves her sister deeply in spite of the cruelty her sister often subjects her to. From a servant and from Akish’s brother she learns of God and slowly begins to discover spiritual truths for herself. She is greatly conflicted between her natural desire to do good, serve her sister and her children, and the terrible demands and sacrifices required of her.

Moore’s earlier novels are all built on Book of Mormon characters and events, mostly prophets. They tend to be light romances placed in doctrinal settings with rich Book of Mormon settings. Daughters of Jared takes a different tack as it features woman, introduces no prophets, and deals with the Jaredites rather than the Nephites. The rich, detailed background is there, but the story is primarily imaginative though it fits the few known facts about this time, people, and events. This story, too, delves more deeply into the thought processes and emotions of the female characters than do Moore’s other books. Naiva is an excellent character and watching her grow, develop, and reach a point where she can determine her own course in life is both painful and satisfying.

Even with the greater attention given to emotional details, Daughters of Jared is not a strictly character driven novel. It includes fast-paced action, suspense, and drama. It easily falls into the category of those “can’t put it down” books that keep us reading into the small hours of the night. The author builds the tension with finesse to keep the fiction arc climbing, then provides a satisfying, though not completely happy ending in keeping with the scriptural account.

H. B. Moore has received awards for several of her novels and is the author and co-author of two acclaimed non-fiction books, Women of the Book of Mormon: Insights & Inspirations (includes a non-fiction chapter on the daughter of Jared) and Christ’s Gifts to Women with Angela Eschler. Moore was born in Rhode Island, but grew up mostly in Utah though she spent much of her childhood in the Middle East and was actually baptized in the Red Sea. She graduated from Brigham Young University and is actively involved in the League of Utah Writers and LDStorymakers. She and her husband are the parents of four children.